White-nose syndrome in bats spreads as far south as Alabama

White-nose syndrome, a deadly fungal disease affecting bats in North America, has spread to Alabama, Missouri and Delaware, according to wildlife officials.

White-nose syndrome, a deadly fungal disease affecting bats in North America, has spread to Alabama, Missouri and Delaware, according to announcements made by wildlife officials in March 2012, using new data obtained during the 2011 – 2012 hibernating season. The presence of white-nose syndrome in Alabama and Missouri marks the southern-most and western-most spread of this cold-loving disease across North America. In all, as of the 2011 – 2012 hibernating season, white-nose syndrome among bats has spread to 19 different states in the U.S. and four Canadian provinces.

The U.S. Fish and Wildlife Service announced on April 6, 2012 that it had awarded approximately $1.4 million in grants to help combat the disease. Read more here.

Bats play a vital role in North America’s ecology and economy. A study published in 2011 in the journal Science estimated that insect-eating bats in North America save farmers at least $3.7 billion dollars a year in pest-control costs. The spread of white-nose syndrome poses a threat to the ecological services provided by bats, and wildlife officials are currently seeking ways to minimize the impacts of this deadly disease.

White-nose syndrome is an emerging fungal disease in bats that was first detected in New York in 2006. White-nose syndrome is thought to be caused by the fungus, Geomyces destructans. The cold-loving fungus invades the skin of hibernating bats causing erratic behavior and death. U.S. Fish and Wildlife Service biologists estimate that at least 5.7 to 6.7 million bats have died from white-nose syndrome as of 2011.

Announcements about the ongoing spread of white-nose syndrome among U.S. bats can be found on this page from the U.S. Fish and Wildlife Service.

By the 2010 – 2011 hibernating season, white-nose syndrome had spread to bat populations in 16 different states and 4 Canadian provinces. After the 2011 – 2012 hibernating season ended in March, wildlife officials confirmed the presence of white-nose syndrome in bat populations from 19 different states and 4 Canadian provinces. These areas include:

While symptomatic bats have not been found in Oklahoma, the presence of Geomyces destructans has been detected in this state as well. 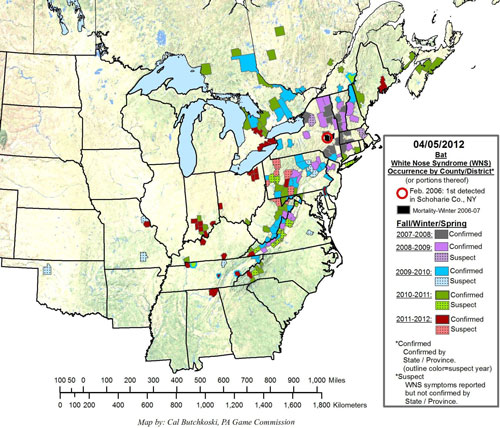 Map of white-nose syndrome by region as of April 5, 2012. Image from USFW courtesy of Cal Butchkoski, PA Game Commission.

The winter of 2012 was the first year that bats afflicted with white-nose syndrome were observed in Alabama, Delaware and Missouri.

Keith Hudson, a biologist with the Alabama Department of Conservation and Natural Resources, said in a March 14, 2012 press release:

White-nose syndrome had been confirmed in several counties in Tennessee, but had yet to be discovered in Alabama until this year. This disease is likely one of the most significant disease threats to bat populations in Alabama due to its potential to affect multiple bat species and the devastating nature of the affliction.

To protect bats and fragile cave ecosystems, wildlife officials in Alabama and Missouri restrict access to some caves. The U.S. Fish and Wildlife Service is urging people to honor cave closures and report any unusual bat behavior to your state natural resource agency.

Bottom line: Wildlife officials have confirmed that white-nose syndrome, a deadly fungal disease affecting bats, has spread to 19 different states in the U.S. and four Canadian provinces as of the 2011 – 2012 hibernating season. The winter of 2012 was the first year that bats afflicted with white-nose syndrome were observed in Alabama, Delaware and Missouri. The presence of white-nose syndrome in Alabama and Missouri marks the southern-most and western-most spread of the disease across North America.

Bats only roost with their closest buddies