September 2013 has been busy for sightings of bright fireballs. The one at 11:33 p.m. local time on September 27 was the 14th fireball sighting in the U.S. in September.

The American Meteor Society (AMS) has reported at least 373 reports of another bright fireball – a very bright meteor, likely a small chunk of natural incoming space debris – over the U.S. last night (September 27, 2013). These reports followed a similar event over approximately the same area the day before (September 26). The AMS called the coincidence of two bright fireballs, or bright meteors, spotted over approximately the same region on consecutive days “surprising.” Witnesses from Georgia, Illinois, Indiana, Kentucky, Maryland, North Carolina, New York, Ohio, Pennsylvania, Tennessee, Virginia, Wisconsin and West Virginia reported a bright light moving across the night sky on September 27 at around 11:33 p.m. local time, according to the AMS.

Fireball might sound ominous, but it is just the word astronomers use to mean bright meteor. As seen from a whole-Earth perspective, fireballs are seen often. It’s unusual to have two appear on consecutive nights over the same region, however.

September 2013 has been a busy month for sightings of bright meteors, according to the AMS. Last night’s event marks the 14th fireball sighting with at least 25 witnesses in September, the most ever since the AMS started recording sightings online, they say.

The video above appears to show the September 27 fireball sighting event. 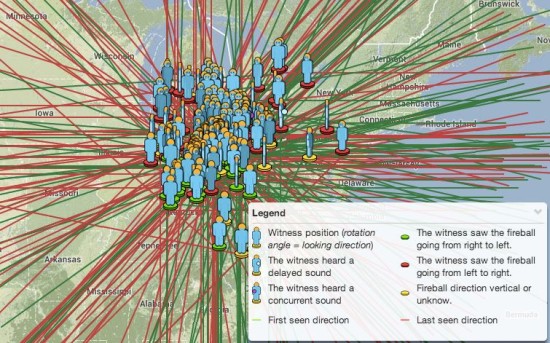 This image shows 200 of 373 eye-witness reports, overnight on Friday, of a bright meteor seen over the U.S. Midwest. Image via American Meteor Society. 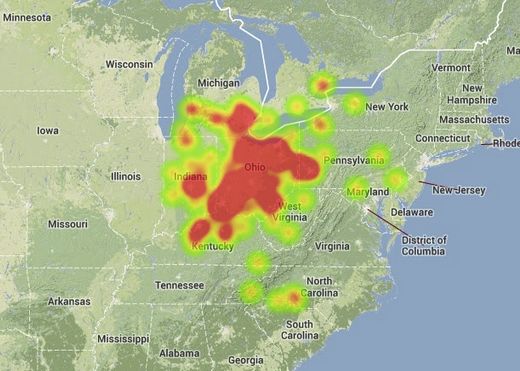 The image above is a “heat map” of sightings of the September 27 fireball. Compare to heat map showing September 26 fireball sightings. Very similar!

Bottom line: Another bright meteor has been seen over the U.S. This one was spotted on September 27, 2013 at around 11:33 p.m. local time. Witnesses from Georgia, Illinois, Indiana, Kentucky, Maryland, North Carolina, New York, Ohio, Pennsylvania, Tennessee, Virginia, Wisconsin and West Virginia saw it. It was the 14th fireball sighting in the U.S. for September, 2013.

Over 400 reports of large fireball over U.S. Midwest on September 26