Typhoon Wipha, currently located in the northwestern Pacific Ocean, is pushing to the northeast towards Japan over the next 24 hours. It will likely bring heavy rain, gusty winds, and large surf across the east coast of Japan today (October 15, 2013). Fortunately, Wipha is projected to weaken as it moves over cold waters and into an atmosphere that is unfavorable for strengthening as wind shear increases. Still, Typhoon Wipha is likely to add more problems to those trying to fix Japan’s damaged Fukushima nuclear plant, where there have been leaks of radioactive water into the ocean and several workers last week were accidentally doused with radioactive water.

As of October 15 at 9Z (or 5 a.m. EST), the Joint Typhoon Warning Center reports that Typhoon Wipha contains 80-knot winds, which is estimated around 90 miles per hour (mph) or 148 kilometers per hour (kph). The storm is accelerating to the northeast at 17 knots.

At one point, Wipha was a strong Category 4 typhoon with sustained winds around 130 mph this past Sunday. Now, Wipha is transitioning from a tropical system into an extratropical system. What does that mean? It means that its winds will likely expand outward and create a larger impact across Japan today. Rainfall totals of 3-7 inches are possible.

The extra rain and large surf is a major concern for the Fukushima plant trying to recover since the tragic earthquake and tsunami devastated the area back in 2011. Wipha will only complicate matters and result in delays in trying to fix radioactive leaks. 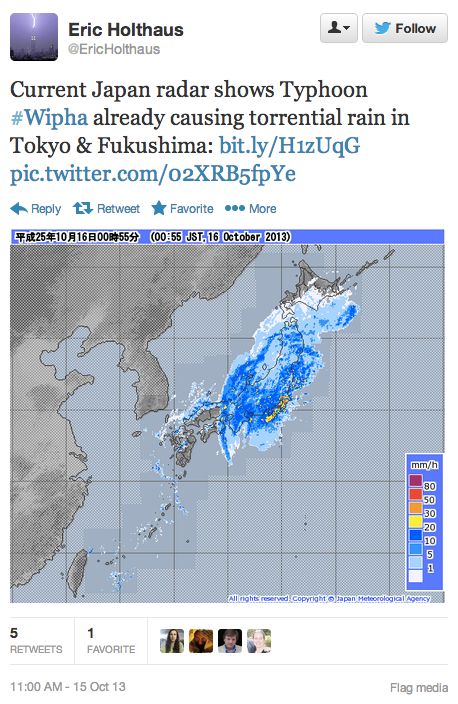 Bottom line: Typhoon Wipha will create problems across Japan today (October 15, 2013) and tomorrow. It will bring heavy rain, strong winds, and heavy surf along the eastern coast of Japan. The city of Tokyo (population: 9 million) and Japan’s damaged Fukushima nuclear plant are both very vulnerable as the storm accelerates to the northeast.

Thank you! Your submission has been received!
Oops! Something went wrong while submitting the form.
END_OF_DOCUMENT_TOKEN_TO_BE_REPLACED