Typhoon Muifa – which briefly became a Category 5 typhoon and was the 9th named storm of the 2011 Pacific typhoon season – dissipated on August 9, but not before it affected hundreds of thousands of people in parts of Japan, South Korea, North Korea, and China with flooding rains and strong winds.  Photographer and nature enthusiast James Reynolds was right in the thick of the typhoon – which, if it had been in the North Atlantic, would have been called a “hurricane” – as the storm approached Okinawa, Japan and struck it on August 5, 2011.

Reynolds is a freelance photographer and founder of the website Typhoon Fury. He traveled to the little island of Okinawa, Japan to experience the true force of Muifa. He shared his experiences with EarthSky readers as Typhoon Muifa battered the coast of Okinawa:

I headed to the southwest part of the island closest to the eye and recorded solid category 1 eyewall conditions with winds gusting to around 95 to 100 mph. The eye actually clipped my location, and a minimum pressure of 957.9hPa was recorded by the Japanese met agency in Naha city. Luckily, damage was superficial, but many powerlines came down with up to 45,000 houses without power at some stages, as well as flooding. We were also lashed by tropical storm force winds for over 48 hours!

The eye of Typhoon Muifa was over Okinawa on August 5. As it had approached Okinawa, it had gone from a Category 5 typhoon to a Category 2 typhoon, with winds around 100 mph. You can also watch some of Reynold’s footage of Typhoon Muifa, below. Video used with permission.

Typhoon Muifa originally developed as a depression on July 25 in the western Pacific ocean.  On July 27,  the depression became Tropical Storm Muifa with sustained winds of 40 miles per hour (mph).  Muifa maintained tropical storm status through July 29, and then Muifa found itself in the perfect position to intensify rapidly.

The National Hurricane Center defines rapid deepening (intensification) for a tropical cyclone as an increase of winds of at least 30 knots (35 mph) within 24 hours.  Muifa found extremely warm ocean waters, an anticyclone in the upper levels which allowed it to breathe, and low wind shear for it to bomb out from a tropical storm to a Category 5 typhoon in just 12-18 hours with sustained winds of 160 mph. It is important to remember that systems in the western Pacific ocean are typically known to be larger and stronger than systems in the eastern Pacific or Atlantic oceans.

Hurricanes/typhoons cannot sustain themselves for long periods of time. They typically go into eyewall replacement cycles. When this occurs, a cyclone weakens and tries to reform a new eyewall.  Muifa had a lot of eyewall replacement cycles, which is why the power of the storm weakened as it approached the Japanese island of Okinawa, becoming a Category 2 typhoon with winds around 100 mph. 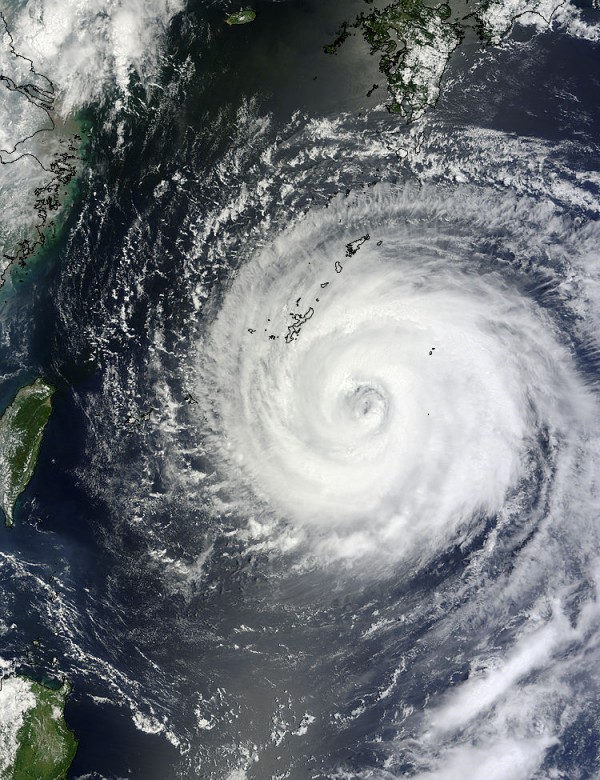 Typhoon Muifa slowed down in forward speed, grew larger as it crossed the island, and then flooding became a huge concern.  Nearly 42 inches of rain were recorded at the Kadena Air Force Base in Japan.  Fortunately, this area was built to withstand strong tropical cyclones.

After Typhoon Muifa slowly moved northwest out of Okinawa, it approached parts of North Korea and eastern China.  Originally, Muifa was forecasted to make landfall near Shanghai, China.  However, Muifa decided to travel due north and avoided the city of Shanghai.  According to NASA, Muifa produced rough surf and created sea level heights as high as 28 feet (8.5 meters) for portions of China, South Korea, and North Korea as it crossed the Yellow Sea.  Over 360,000 people evacuated Shandong, China as Muifa approached the area.  Fortunately, by that time, Muifa had weakened into a tropical storm with winds around 65 mph.

On August 9, 2011, Tropical Storm Muifa made landfall in North Korea and dissipated as it moved through portions of eastern China.  There were reports of at least four deaths along the west coast of South Korea; ten died in North Korea, and four people died in the Philippines. Numerous injuries were reported, but thankfully Muifa was a weaker storm when it approached highly populated areas.

Special thanks to James Reynolds for sharing his experiences.  You can visit his website Typhoon Fury to take a look at some of his previous work.

Bottom line: Typhoon Muifa was the 9th named storm of the 2011 Pacific typhoon season, passing over parts of Japan, South Korea, North Korea, and China with flooding rains and strong winds. It briefly became a Category 5 storm but was Category 2 by the time it struck Okinawa on August 5. Photographer and nature enthusiast James Reynolds shared his photos and video of the storm as it approached Okinawa and struck it on August 5, 2011. Typhoon Muifa dissipated on August 9, 2011.

Thank you! Your submission has been received!
Oops! Something went wrong while submitting the form.
END_OF_DOCUMENT_TOKEN_TO_BE_REPLACED