Scientists say California’s drought is being driven by low (but not unprecedented) precipitation and record high temperatures.

Scientists studying the severe drought that has beleaguered California for the past three years estimate that this drought is the worst one in the past 1,200 years. The new estimate comes from data they compiled on tree ring growth and soil moisture. Low (but not unprecedented) precipitation and record high temperatures are the main factors driving this drought, the scientists say. An online edition of the journal Geophysical Research Letters published this work on December 3, 2014.

While droughts are relatively common in the western United States, the 2012 to 2014 drought in California has been particularly severe. During the drought, snow packs shrank to record low amounts and the water levels in many reservoirs plummeted to such low levels that several cities had to enforce water use restrictions to protect remaining water supplies. Officials at the National Weather Service are expecting drought conditions to improve somewhat with the recent rain, but say the drought will likely persist throughout the spring and beyond. 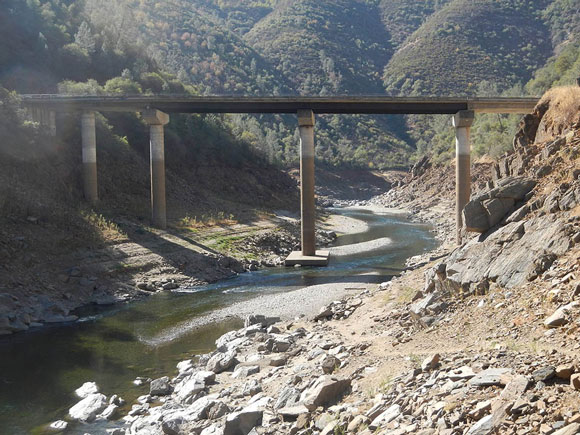 Low water levels in the Tuolumne River during the 2012–2014 California drought. Image via USGS.

To figure out just how unusual this drought is in comparison to past droughts in California, scientists from the University of Minnesota and the Woods Hole Oceanographic Institution compiled tree ring data from blue oaks to reconstruct the paleoclimate history of central and southern California. Blue oak trees, which are endemic to California, are very sensitive to a lack of moisture in the environment. In years with low moisture, the trees grow poorly and produce small growth rings. In contrast, the trees grow better during wet years, which results in larger growth rings.

Data from tree ring studies are important for analyzing drought events over hundreds to thousands of years because rainfall data from meteorological stations are not available for those times. 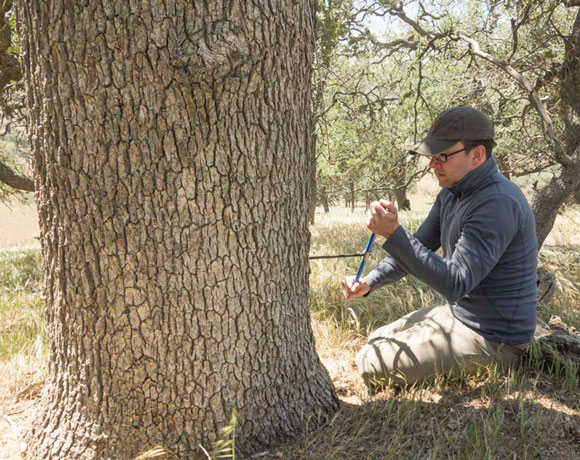 Daniel Griffin, lead author of the study, is an assistant professor in the Department of Geography, Environment and Society at the University of Minnesota. He commented on their methods in a press release:

California’s old blue oaks are as close to nature’s rain gauges as we get. They thrive in some of the driest environments where trees can grow in California.

Data from the oak trees showed that the current drought is the worst one in the past 1,200 years.

The severe drought in 2012–2014 appears to have been driven by a combination of low amounts of precipitation and high temperatures, the scientists say. While precipitation has been unusually low over the past few years, the amount of reduced rainfall is not unprecedented in California, and in the past, such events did not produce equally severe droughts. Thus, it is likely that recent record high temperatures exacerbated the severity of the current drought. Such droughts, which are sometimes called “hot droughts,” are expected to become more frequent with climate change.

Kevin Anchukaitis, co-author of the study, is an assistant scientist at the Woods Hole Oceanographic Institution. He explained their findings as follows:

While it is precipitation that sets the rhythm of California drought, temperature weighs in on the pitch.

The research was funded by the National Oceanic Atmospheric Administration and Woods Hole Oceanographic Institute.

Bottom line: A new study based on tree ring growth that was published in the journal Geophysical Research Letters on December 3, 2014, estimates that the current California drought is the worst one in the past 1,200 years. Both low rainfall and record high temperatures are contributing to the severity this drought, the scientists say.