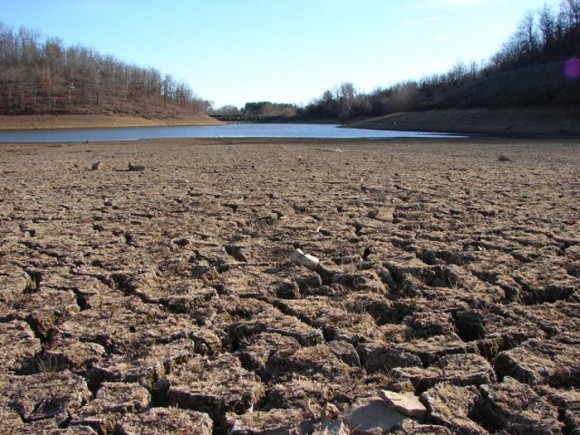 The drought crippling California is by some measures the worst in the state’s history. Photo credit: NOAA

The atmospheric conditions associated with the unprecedented drought in California are very likely linked to human-caused climate change, Stanford researchers report. Climate scientist Noah Diffenbaugh of Stanford University and colleagues used a combination of computer simulations and statistical techniques to show that a persistent region of high atmospheric pressure over the Pacific Ocean – one that diverted storms away from California – was more likely to form in the presence of modern greenhouse gas concentrations. The Bulletin of the American Meteorological Society published this study on September 29, 2014.

The exceptional drought crippling California is by some measures the worst in state history, these scientists say. Combined with unusually warm temperatures and stagnant air conditions, the lack of precipitation has triggered a dangerous increase in wildfires and incidents of air pollution across the state.

In addition, the water shortage could result in direct and indirect agricultural losses of at least $2.2 billion and lead to the loss of more than 17,000 seasonal and part-time jobs in 2014 alone.

This new research suggests that extreme atmospheric high pressure in this region – which is strongly linked to unusually low precipitation in California – is much more likely to occur in our modern times than prior to the 1800s, when the Industrial Revolution brought on emissions of greenhouse gases greater than in the distant past. 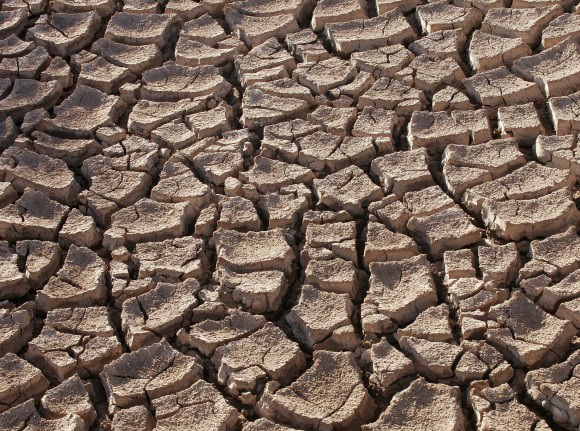 Scientists agree that the immediate cause of the drought is a particularly tenacious blocking ridge – a region of high atmospheric pressure that disrupts typical wind patterns – over the northeastern Pacific. Among scientists, this ridge is known as the Ridiculously Resilient Ridge, or Triple R. It has prevented winter storms from reaching California during the 2013 and 2014 rainy seasons.

Like a large boulder that has tumbled into a narrow stream, the Triple R diverted the flow of high-speed air currents known as the jet stream far to the north, causing Pacific storms to bypass not only California, but also Oregon and Washington. But what’s causing this tenacious ridge?

The team first assessed the rarity of the Triple R in the context of the 20th century historical record. Analyzing the period since 1948, for which comprehensive atmospheric data are available, the researchers found that the persistence and intensity of the Triple R in 2013 were unrivaled by any previous event.

In the other set of experiments, the researchers found that the extreme heights of the Triple R in 2013 were at least three times as likely to occur in the present climate as in the preindustrial climate. Researcher Bala Rajaratnam of Stanford University said:

We’ve demonstrated with high statistical confidence that large-scale atmospheric conditions similar to those of the Triple R are far more likely to occur now than in the climate before we emitted large amounts of greenhouse gases.

This isn’t a projection of 100 years in the future. This is an event that is more extreme than any in the observed record, and our research suggests that global warming is playing a role right now.

As reported by Brian Clark Howard at National Geographic, not all researchers agree with the results of Rajaratnam, Diffenbaugh and the team at Stanford. Another study in the September 29 issue of the Bulletin of the American Meteorological Society, by Hailan Wang and Siegfried Schubert of NASA’s Goddard Space Flight Center, concludes:

… there was no increased risk of drought in California during 2013 as a result of the long-term warming trend.

The NASA scientists agree that warming does favor the formation of a high-pressure ridge over the Pacific, and that this ridge would act to block storms. At the same time, they say, warming increases the amount of water vapor in the air off the California coast, and that water vapor in the air would act to increase California’s rainfall. Wang and Schubert wrote that:

… the two effects appear to counteract each other.

As with many attempts to link ongoing global warming to local weather, only time will tell which team of researchers is correct. It is interesting to note, though, that more and more scientists are attempting to find and explain these possible links between the big picture of climate change and local weather events.