Sometimes called red sprites or lightning sprites, they are offshoots of large-scale electrical discharges that take place above thunderstorms.

Yesterday (June 25, 2014), Spaceweather.com reported on the many gigantic lightning sprites observed this month, as summertime thunderstorms swept the U.S. They are offshoots of large-scale electrical discharges that take place high in Earth’s atmosphere, above thunderstorms. They’re often red in color; hence they’re sometimes called red sprites. They last only a few tens of milliseconds. Thomas Ashcraft, a longtime observer of this phenomenon, said there have been “a bumper crop” of sprites in June 2014. He captured the photo below on June 23. He told Spaceweather.com:

According to my measurements, it was 40 miles tall and 46 miles wide. This sprite would dwarf Mt. Everest! 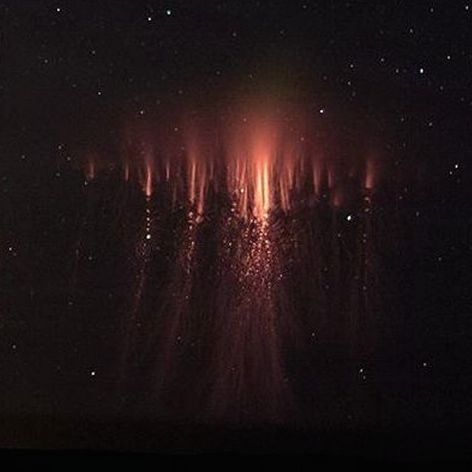 Large’ ‘jellyfish’ sprite captured on June 23, 2014 by Thomas Ashcraft. The sprite was over western Oklahoma, but Ashcraft caught it from his observatory in New Mexico, 289 miles away. Used with permission. Visit Thomas Ashcraft’s website Heliotown.

The video below, also from Thomas Ashcraft on June 23, will give you an idea of sprites activity above thunderstorms in real time.

Sequence 01 from Thomas Ashcraft on Vimeo.

Bottom line: Thomas Ashcraft in New Mexico captured this photo and video of lightning sprites on June 23, 2014. The photo shows what he said is one of the largest ‘jellyfish’ sprites he has captured in the last four years. Amazing photo!

Jupiter, Saturn and Venus might have lightning sprites, too