Here’s an elusive lightning sprite, captured astronauts with a digital camera on Expedition 31 aboard the International Space Station (ISS). They got this photo as ISS traveled over Myanmar on April 30, 2012. 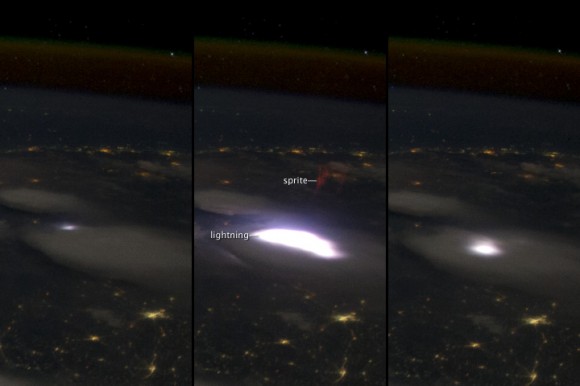 An astronaut in the International Space Station photographed a lightning sprite – strange type of lightning that occurs above thunderstorms and lasts only milliseconds – on April 30, 2012. Image Credit: NASA Earth Observatory

Why are they so elusive? It doesn’t help that they flash on a millisecond timescale. But also they are above thunderstorms, so they’re usually blocked from view on the ground. Sometimes they’re seen from a distance, or from a high mountain. Astronauts in space have the perfect vantage point.

By the way, these sprites send pulses of electrical energy up toward the edge of space — the electrically charged layer of the atmosphere known as the ionosphere — instead of down to Earth’s surface.

Bottom line: ISS astronauts captured photos of elusive lightning sprites on April 30, 2012, as they traveled over Myanmar. Lightning sprites are offshoots of large-scale electrical discharges that take place high in Earth’s atmosphere, above thunderstorms. They’re red in color and they last only a few tens of milliseconds.

Jupiter, Saturn and Venus might have lightning sprites, too