The good, the bad, and the ugly … learning from Hurricane Sandy

There’s lots of very bad and ugly. Sandy will likely become one of our costliest natural disasters. But the science got the storm right.

Looking back at the entire track of Superstorm/Frankenstorm/Non-Tropical Cyclone/Extratropical Cyclone Sandy (yes, the storm has had a bunch of names!), it is really amazing to see how it formed and how the science got this storm right.

It also gave me a horrible feeling about what could come out of this storm, as I knew so many deadly scenarios were in play. I have decided to highlight the good, the bad, and ugly parts about Hurricane Sandy. While most of this was simply ugly, there were a few good things that came out of this forecast. Let’s take a look back at Hurricane Sandy and see what went right and what went wrong.

The forecast for Sandy was fantastic, and could be considered as one of the finest moments in meteorology. The European Centre for Medium-Range Weather Forecasts, also known as ECMWF or the European model, nailed down the track of Sandy a week before the storm pushed into southern New Jersey. The Europeans have more money invested into their weather model, and it uses 4D data assimilation unlike our American model, the Global Forecast System (GFS).

Seven days before the event, the GFS model insisted that Sandy would push out to sea and possibly affect Bermuda. However, run after run of consistent forecasts, the European model kept its solution of a New England storm affecting millions of people.

With such a huge concern about Sandy, NOAA decided that the local national weather services should launch special radiosondes (weather balloons) every six hours to get a better measure of what was happening within our atmosphere. These measurements about barometric pressure, temperature, wind speeds with height, and so much more was able to help the models create better runs so meteorologists would have a better idea of the track of the storm. If one feature pushed out or formed differently, it could easily change the track of Sandy. Using weather satellites such as GOES-13, which monitors the Eastern Seaboard and Atlantic ocean, can also help us not only get visible images of Earth from outer space, but it also grabs a lot of data and information that we also use in our weather models. If you can recall, GOES-13 experienced a lot of noise and had to be replaced by a temporary satellite until it was fixed a few months ago. 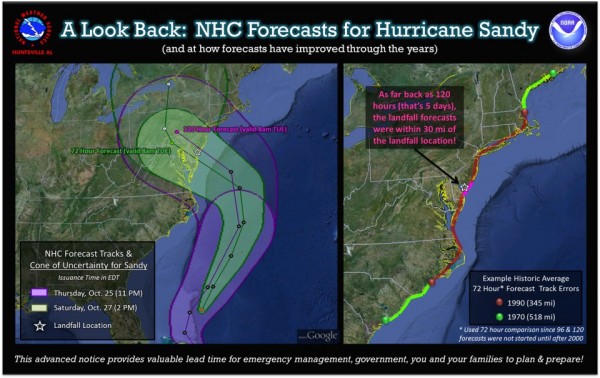 The track for Sandy was great. The weather models and the NHC has a great forecast for the track of Hurricane Sandy. Image Credit: NOAA

I wrote a post about how we may begin to see a rapid decline in U.S. satellites in the near future. According to a report from the National Research Council in early 2012, U.S. satellites in orbit are expected to decline from 23 in 2012 to only six in the year of 2020. Long-running missions to build and launch satellites are undergoing delays, missions are being cut as budgets are cut, and there have been some inevitable launch failures, plus changes in mission design and scope. If we do not improve these problems, then all of the progress we have made in the study of atmospheric sciences will be for nothing. Now, do you see how important it is to fund and receive full support for NOAA/NASA? If we never had satellites or weather models, then what happened on Monday evening, October 29, 2012 could have been another repeat of the 1938 Long Island hurricane that swept New York by surprise and killed hundreds of people. Fortunately, science prevailed and gave us plenty of time to warn the general public about the danger of Hurricane Sandy.

I will state this first: I know there are plenty of people that took this storm seriously. If people were told to evacuate their homes, then many people did. However, there was confusion regarding the storm and its impact. For instance, do you remember Hurricane Irene from last year? Although the storm caused significant flooding and damage across New England, it was no where near the sense of dangerous as originally hyped. For some people, Irene was not a big deal. This “false” sense of being safe can really get people in trouble, and I find that to be a huge issue. You will find a few meteorologists who “hype” storms every now and then simply for ratings. When it comes to listening to people for weather information, it call comes down to who you trust and listen to. When meteorologists and local NWS decide to use strong wording in their forecasts and discussions to give the public a sense of urgency and that danger is near, you should always listen. When I wrote up a post about Sandy, I decided to title it “Hurricane Sandy is dangerous” to give everyone a sense that this storm means business.

One huge area of concern I had was the process of not issuing hurricane watches or warnings along the New Jersey and New York coasts. The original idea from the National Hurricane Center was that this storm would become extratropical and thus not be a hurricane as it pushed inland. I understand the science of how it works regarding the transition of a warm core low becoming a cold core. However, the general public does not understand. Instead of issuing hurricane warnings, the NHC gave the local NWS offices to issue their own warnings. Some of the warnings such as “High wind warnings” were not only issued along the coasts where Sandy was suppose to make landfall, but these warnings were also issued as far south as North Georgia. My issue: Does the general public understand the definition of a high wind warning? I will admit, I had to double check the definition myself to understand what it truly means.

A warning for sustained surface winds greater than 40 mph/64 kph lasting more than an hour or winds over 58 mph/93 kph over land that are either predicted or occurring for an unspecified period of time.

For some people, this definition simply tells them that it will be very windy outside. However, does it really strike concern for most people? Personally, I believe the National Hurricane Center should have issued hurricane warnings. Many meteorologists via social media questioned their actions, and I am sure this will still be a topic that will be mentioned in future discussions about the warning process of Hurricane Sandy. This topic got so out of hand, the National Hurricane Center actually released a PDF online explaining their actions of not issuing hurricane warnings.

If you follow social media, you probably had information overload regarding Hurricane Sandy. At one point, there were confirmations that the New York Stock Exchange was flooding. Twenty minutes later, we had a new confirmation that this was not the case. In fact, the biggest thing that bothers me is when people post fake images. Everytime a major storm hits part of the United States, people tend to grab the same images over and over and claim it was from that particular event. I saw it during Hurricane Katrina, and I also saw it during the April 14-15, 2012 tornado outbreak across the Central Plains. Here’s my favorite example of the fake picture that circulated online: 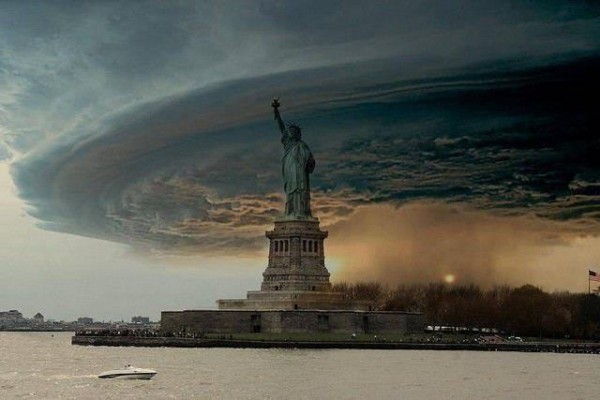 I will admit though, the image below is a little more believable. No? 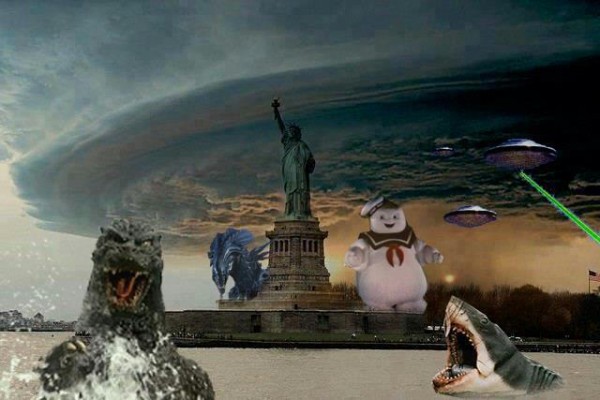 In attack of the spread of fake images online, someone decided to add a little humor to the situation.

Either way, putting out fake images adds confusion for broadcast meteorologists/journalists who are trying to showcase what is actually happening during an event. If you are out there and think it is funny to photoshop old storms and claim it was something else, it isn’t. I cannot tell you how many times I have seen fake hail images, supercell structures that occurred a decade ago, and more. It is important to know who you follow when it comes to getting information. Is the source reliable? If so, you should still double check the picture. Sometimes, the photos are so good, that even reliable sources get fooled. I will admit, it has happened to me.

As of now, at least 81 people in the U.S. have died from Sandy. Many of the deaths occurred from trees falling on cars and buildings. Sandy is also responsible for 67 deaths in the Caribbean, and two deaths in Canada. Overall, at least 150 people have passed away from this brutal storm. The damage has been extensive and beyond comprehensible, especially along the Jersey shore. There is no doubt Sandy reshaped the coastline as storm surge brought piles of sand well inland and destroyed homes and bridges along the coast. Many houses were simply pushed off its foundation and shifted to a different location. Cars were buried in water, and the subway stations flooded. There is no doubt in my mind that Hurricane Sandy will rank as one of the top three costliest weather disasters in United States history. Prayers go out to all of the victims that are fighting through this horrible tragedy.

Bottom line: The forecasts for Sandy were excellent, and the ECMWF weather model saw this storm developing and pushing into the Mid-Atlantic/New England about eight days before actual landfall. I believe there could have been confusion regarding the lack of hurricane watches and warnings that were not issued for portions New Jersey and New York. As the storm hit, social media was excellent on getting real time information as it came in. However, there were a lot of fake images that were being shared around. I wish this never happened, but it tends to be the case whenever a significant weather event occurs. Finally, the ugly part of Sandy is the death and destruction that has occurred not only in the United States, but also in the Caribbean. The death count has surpassed over 150 deaths, which is one too many. Prayers go out to everyone affected by Hurricane Sandy.