The 20th anniversary of Hurricane Andrew

It’s been 20 years since Hurricane Andrew hit the southeast coast of Florida. What a storm. What a story.

On the morning of August 24, 1992, Hurricane Andrew, a Category 5 hurricane with maximum wind speeds exceeding 160 miles per hour, struck portions of southern Florida. This week marks the 20th anniversary of this tragic and violent storm. Before Hurricane Katrina struck the Gulf coast in 2005, Andrew was listed as the costliest hurricane to hit the United States, with estimated damages exceeding 45 billion dollars.

In this post, we’ll look into the history of this hurricane and share the experiences from meteorologist Bryan Norcross, who is currently the hurricane specialist at the Weather Channel. There will be plenty of images and video to accompany the post, and we will look into the future and see if our coasts can endure a major hurricane strike similar to Andrew in the United States. 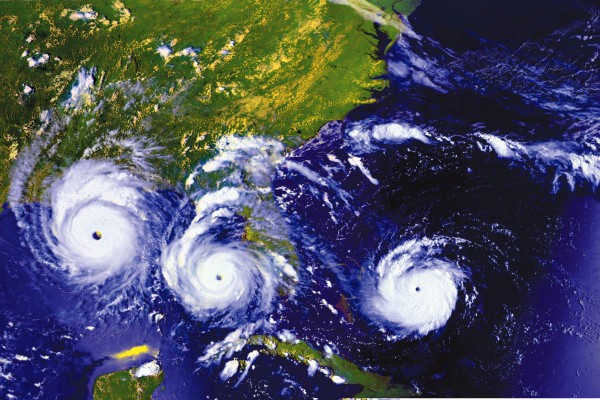 Personally, Hurricane Andrew was the first storm that really got me into eventually studying meteorology. The storm was not an easy forecast. According to Bryan Norcross, the hurricane specialist of the Weather Channel and on-air meteorologist of WTVJ when Andrew struck south of Miami, many people were unsure if Andrew would survive its track through the Atlantic ocean as wind shear had been a dominant feature for that year thanks to an El Niño that had dominated the global weather. Remember, in El Niño years, wind shear typically increases in the Atlantic ocean, thus minimizing tropical activity. It was already mid August and not one named storm had formed for the year. The official forecast from the National Hurricane Center on Friday, August 21, 1992 had Andrew pushing much further north and away from South Florida. Andrew was only a tropical storm that Friday, and no one had any idea that Andrew would rapidly intensify into a Category 5 storm two days later. 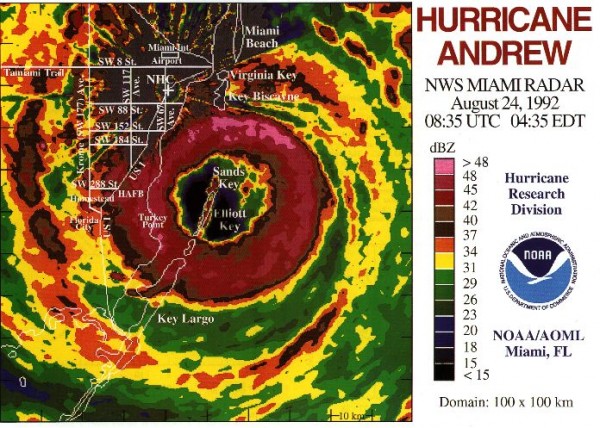 For Bryan Norcross, Sunday and Monday (August 23-24, 1992) would bring 23 hours of nonstop weather coverage of Hurricane Andrew on WTVJ. On Saturday night, Norcross told his viewers,

“I’m going to go home now and get some sleep and I suggest you do, too. Tomorrow is going to be a very big day in our city and I’m not sure if we’re going to sleep tomorrow night.”

Hurricane Andrew: As it happened

It was evident by August 22 that high pressure to the north was building and strengthening north of Andrew. With this in mind, Andrew would be steered further west than northwest, and the fear of a major hurricane hitting Miami was becoming a huge concern. On August 23, 1992, Andrew pushed over Eleuthera in the eastern Bahamas as a Category 5 storm with wind speeds exceeding 165 mph. Andrew weakened slightly as it passed through the Bahamas, but intensified and increased in speed as it pushed into southern Florida. At this point, it was obvious the strongest part of the storm would likely stay south of Miami, sparing the city from the strongest winds and storm surge. However, the biggest concern was for parts of southern Dade County. By early Monday morning on August 24, 1992, the strongest part of the storm was pushing into southern Florida. Norcross was on air during the entire event, and many people were able to tune into their radios and televisions for continuous weather coverage. (Note: there were other meteorologists on air during this event as well!) Norcross decided to move him and his team out of the main studio of WTVJ and move into a storage area for safety. He was often told by residents in the area that it motivated them to move to their safest part of their house and protect themselves from the worst of the storm. It was his actions that likely saved lives.

Here was footage of Bryan Norcross moving to a safe spot during live coverage of Hurricane Andrew in the early morning hours of August 24, 1992:

By 4:35 AM, the National Weather Service radar was blown off the roof of the National Hurricane Center. The forward speed of Andrew and an intensifying eyewall likely contributed to wind speeds over 160 mph in many areas in southern Dade County. In particular, Homestead was in the heart of the strongest hurricane force winds that were exceeding Category 4 strength. Andrew had sustained winds of at least 125 knots (145 mph) with gusts exceeding 150 knots (175 mph). With this said, Hurricane Andrew was reclassified as a Category 5 storm as it pushed into Florida. The lowest minimum pressure recorded with Andrew was 922 millibars, making Andrew the third lowest pressure this past century for a land-falling hurricane in the United States. The top two strongest land-falling storms to affect the United States that were stronger than Andrew (regarding the lowest pressure) was the 1935 Labor Day Hurricane (892 mb) and Hurricane Camille in 1969 (909 mb). Hurricane Andrew made landfall near Homestead AFB, Florida at 0905 UTC (5:05 A.M. EDT) on August 24, 1992. In Dade County, 15 people died and nearly one quarter of a million people were homeless. 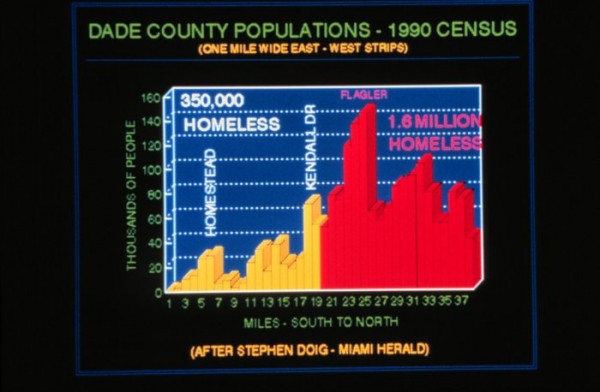 After Andrew intensified into a Category 5 storm as it made landfall near Homestead, Florida, Andrew continued to accelerate to the west into the eastern Gulf of Mexico. The National Hurricane Center was already issuing advisories and watches for the Gulf coast in expectation that Andrew would begin to move to the northwest. The storm began to push to the northwest thanks to a weakening ridge of high pressure to the northeast of the system and an approaching trough to the northwest pushing east. Eventually, this trough would pick Andrew to the north and east and provide parts of the southeast with heavy rain and isolated tornadoes. Andrew maintained Category 3 strength as it pushed through the Gulf of Mexico. By August 26, 1992, Andrew made its second landfall in a sparsely populated section of the south-central Louisiana coast with category 3 intensity at about 0830 UTC. The landfall location is about 20 n mi west-southwest of Morgan City. Overall, Andrew directly killed 26 people. The additional indirect loss of life brought the death toll to 65. These indirect deaths occurred during the recovery phase of this storm. Damage was estimated to be around $45 billion dollars. Andrew is considered the second most costliest hurricane to hit the United States, right behind Hurricane Katrina (2005) and ahead of Hurricane Ike (2008). According to the National Hurricane Center, an estimate indicates that a 20 mile northward shift of Andrew’s track would have resulted in two to three times that much damage (Doig, 1992). Alternately, a southward shift of about 40 miles could have resulted in a negligible monetary loss to mainland Florida (but additional problems, including possible loss of life, for the less-populated Florida Keys).

The winds of Hurricane Andrew were almost equivalent to being in an EF-2 or EF-3 tornado. Image Credit; NOAA/NWS

Overall, the true extent of the damage caused by Andrew was not realized until later that afternoon. Media outlets reported that Miami “dodged a bullet”. Unfortunately, it was points to the south that saw extreme damage. According to Bryan Norcross, hurricanes destroy communications infrastructure. It can take time to truly find out the extent of the damage. The worst damage occurred in Homestead and Florida City in the south up to SW 120th Street in the Kendall section of South Dade County. Thousands of people were without food, water, electricity, and many were homeless. Andrew reportedly destroyed 25,524 homes and damaged 101,241 others. More than 99% of the mobile homes in the area were completely destroyed. The government was slow to arrive, something we saw that was similar to Hurricane Katrina. The local and state government were completely overwhelmed by the extent of the damage from Andrew, and that little coordination occurred. By Saturday, August 29, the military arrived and people were able to sleep and not worry about looters breaking into their houses and stealing valuables. 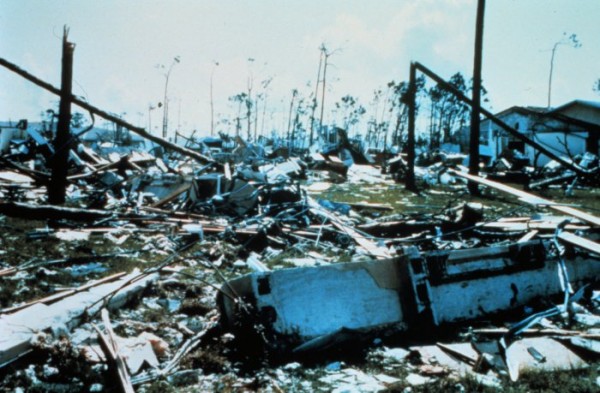 A ground view of the devastation in Pinewoods Villa. Image Credit: NOAA/NWS

I asked Norcross if he thought he and WTVJ could have done something differently while they were airing live coverage on television and radio. In general, he believes they did an excellent job preparing residents for the worse. Prior to the storm, and for the past two years, WTVJ ran special programs for hurricane preparedness to their viewers. After all, southern Florida had not been hit or been affected by a tropical system since Hurricane David back in 1979 or Major Hurricane Betsy in 1965. He was on air that Sunday morning (August 23) and stayed on air for nearly 24 hours straight. Norcross used maps on his desk that allowed him to measure the eyewall of Hurricane Andrew in relation to how far it was away from land with a ruler. The entire area knew the storm was going to be bad, especially after he and the staff of WTVJ relocated into a safer spot in the newsroom. Norcross likely saved hundreds of lives by that action alone. If he could have done anything different, he wishes he had talked more about Homestead, Florida. Homestead was one of the heaviest damaged places Andrew left behind. Originally, they thought the eye of Andrew was further north when it was actually slightly southward.

Today: What can we learn from Andrew?

Prior to Hurricane Andrew hitting southern Florida, the Miami area was considered to have one of the best building codes in the country. Fortunately, Miami was spared from the worst part of this storm. Only 20% of the metropolitan area was affected by Andrew. Since Andrew hit, the population has nearly doubled. Building structures are one of the best in the nation. I asked Bryan Norcross if anyone is ready for a storm similar to Andrew’s strength. His reply? No one is ready for an Andrew anywhere. For instance, population has increased greatly over the years. Many people live near the coast. Some of the most vulnerable cities for a hurricane strike includes Tampa (Florida), Miami (Florida), Savannah (Georgia), New York City, New Orleans (Louisiana), Atlantic City (New Jersey), and Galveston (Texas). Areas that are below or near sea level have higher chances to see a large threat for inland flooding and flood surge. In an instance like Hurricane Katrina, most of the damage and problems occurred due to the infrastructure of the city and the malfunctions of man-made levees. The way I see it, Hurricane Andrew was the wind storm whereas Katrina was a storm of epic flooding conditions. Could it be possible that these two elements are combined by one storm pushing into a vulnerable city? It is possible.

Bottom line: August 24, 2012 marks the 20th anniversary of Hurricane Andrew striking southern Florida. Andrew was the last Category 5 storm to strike the United States. We have seen many Category 5 storms after Andrew, but never had one actually strike the United States. For instance, Hurricane Katrina was a Category 3 hurricane when it pushed into the gulf states. If there is anything to learn from past hurricanes, it is that we should always be ready for a hurricane and be prepared ahead of time. The government should make plans in advance for providing aid to areas that could be hit. Hurricanes are systems that last for hours and can sustain damaging winds that can threaten life and property. If you are told to evacuate, you should definitely board up your house and relocate. No one is ready for a Hurricane Andrew, and many of us hope we never see a day when a possible Andrew could hit a large city. It is not a matter of “if”, however, it is a matter of “when”. No doubt people will always remember August 24, 1992 when Hurricane Andrew pushed ashore as a Category 5 hurricane with maximum wind speeds over 160 mph.

Hurricane Guide: What is a hurricane and how to stay safe

Tropical Update by the Weather Channel