Florence tracking toward U.S. coast: How to stay safe

Posted by Matt Daniel and Deborah Byrd in Earth | September 10, 2018

Hurricane Florence is on track to hit the U.S. East Coast as a major storm later this week. Here are some tips if a hurricane is heading toward your area. 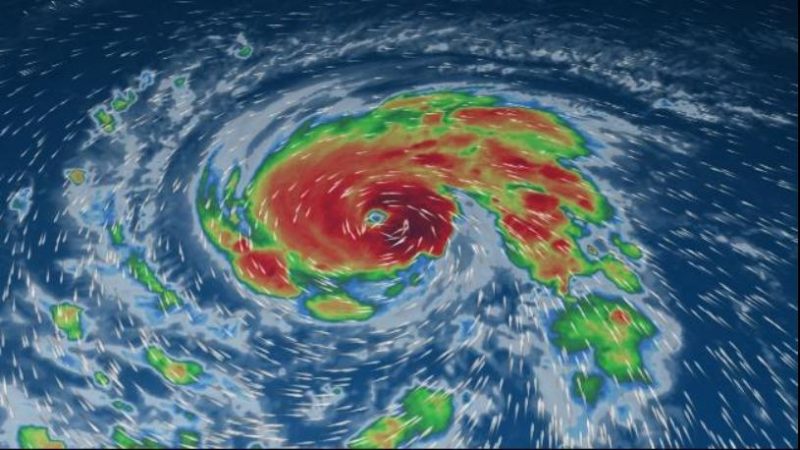 Hurricane Florence via The Weather Channel.

In its 5 a.m. Eastern Daylight Time (09:00 UTC) advisory on Monday, the National Hurricane Center said Florence – now a Category 3 storm – was about 625 miles (1,000 km) southeast of Bermuda. Maximum sustained winds were at 105 mph (170 kph). The storm was moving west-northwest at about 9 mph (14 kph) toward the U.S. East Coast. This Monday morning advisory said: 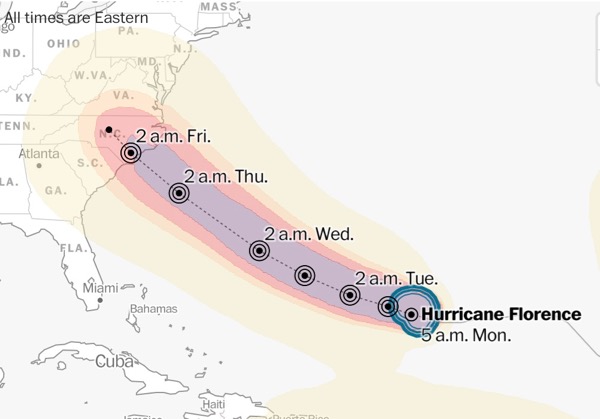 As of 5 a.m. EDT on September 10, 2018, Florence was crawling west-northwest across the North Atlantic Ocean at just 9 mph. Its peak winds were 105 mph, making it a Category 2 hurricane. An eye emerging on satellite images of the storm and the Hurricane Center declared Florence “is forecast to become a major hurricane this morning, and is expected to remain an extremely dangerous major hurricane through Thursday.” Image and info via the Washington Post’s Capital Weather Gang.

As it has intensified, Hurricane Florence’s track has remained unusually stable. The Capital Weather Gang at the Washington Post said that Florence is tracking toward the U.S. East Coast with inevitability rarely seen in storms several days away from landfall, saying:

While forecasters were careful to cite ‘high uncertainty’ in recent days, their tone changed after watching the storm’s eventual path barely shift from what they had considered to be a worst-case scenario.

Below you’ll find a guide that summarizes things you can do to get ready for a potential big storm, if it hits along the coast. You can find the same information, which can also be found in Spanish, by clicking on NOAA’s Hurricane Preparedness Guide.

Here are the 5 AM EDT Key Messages for Hurricane #Florence. Latest information available at https://t.co/tW4KeGdBFb pic.twitter.com/DpgFeN7OIZ

-Determine safe evacuation routes inland.
-Learn locations of official shelters.
-Check emergency equipment, such as flashlights, generators and battery-powered equipment such as cell phones and your NOAA Weather Radio All Hazards receiver.
-Buy food that will keep and store drinking water.
-Buy plywood or other material to protect your home if you don’t already have it.
-Trim trees and shrubbery so branches don’t fly into your home.
-Clear clogged rain gutters and downspouts.
-Decide where to move and secure your boat.
-Review your insurance policy.
-Find pet-friendly hotels on your evacuation route.

-Frequently listen to radio, TV or NOAA Weather Radio All Hazards for official bulletins of the storm’s progress.
-Fuel and service family vehicles.
-Inspect and secure mobile home tie downs.
-Ensure you have extra cash on hand.
-Prepare to cover all windows and doors with shutters or other shielding materials.
-Check batteries and stock up on canned food, first aid supplies, drinking water and medications.
-Bring in light-weight objects such as garbage cans, garden tools, toys and lawn furniture.

If a hurricane warning has been issued, it means hurricane force winds are likely within 36 hours and all precautions should be made immediately.

-Closely monitor radio, TV or NOAA Weather Radio All Hazards for official bulletins.
-Close storm shutters.
-Follow instructions issued by local officials. Leave immediately if ordered!
-Stay with friends or relatives at a low-rise inland hotel or at a designated public shelter outside the flood zone.
–Do not stay in a mobile or manufactured home.
-Notify neighbors and a family member outside of the warned area of your evacuation plans.
-Take pets with you if possible, but remember, most public shelters do not allow pets other than those used by people with disabilities. Identify pet-friendly hotels along your evacuation route.

-Turn refrigerator to maximum cold and keep it closed.
-Turn off utilities if told to do so by authorities.
-Turn off propane tanks.
-Unplug small appliances.
-Fill bathtub and large containers with water in case clean tap water is unavailable. Use water in bathtubs for cleaning and flushing only. Do NOT drink it.
-Stay away from windows and doors, even if they are covered. Take refuge in a small interior room, closet or hallway.
-Close all interior doors. Secure and brace external doors.
-If you are in a two-story house, go to an interior first floor room.
-If you are in a multi-story building and away from water, go to the 1st or 2nd floor and stay in the halls or other interior rooms away from windows.
-Lie on the floor under a table or other sturdy object ONLY if the winds become extremely violent.

You should always have an emergency supply kit with you in times of danger. Here is what the Red Cross, FEMA, and NOAA recommend:

#Sunrise on #Florence this morning is stunning as the storm has rapidly intensified overnight. A well defined eye is visible, with intense thunderstorm activity bubbling throughout the storm. This is a very dangerous hurricane! More loops like this https://t.co/m8k1XcPVvR #wetter pic.twitter.com/B3Riu2mqU6

Here are more factors to consider when a hurricane strikes the coast:

Storm surge is an abnormal rise of water generated by a storm’s winds. Storm surge can reach heights well over 20 feet (6 meters) and can span hundreds of miles of coastline. In the Northern Hemisphere, the highest surge values typically occur in the right front quadrant of a hurricane coincident with onshore flow; in the Southern Hemisphere, the left front quadrant. More intense and larger hurricanes produce higher surge. In addition, shallower offshore waters contribute to higher storm surge inundation. Storm surge, not wind, is by far the greatest threat to life and property along a coastline being struck by a hurricane.

Storm tide is the water level rise during a storm due to the combination of storm surge and the astronomical tide. For example, if a hurricane moves ashore at a high tide of 3 feet (1 meter), a 15-foot (3-meter) surge would be added to the high tide, creating a storm tide of 18 feet (6 meters). The combination of high winds and storm tide topped with battering waves can be deadly and cause tremendous property damage along an area of coastline hundreds of miles wide.

Rip currents can occur even at large distances from the storm. Rip currents are channeled currents of water flowing away from shore, usually extending past the line of breaking waves, that can pull even the strongest swimmers away from shore.

Hurricane-force winds and tornadoes: Hurricane winds can destroy buildings and mobile homes. Debris, such as signs, roofing material, siding and small items left outside become flying missiles during hurricanes. Winds can stay above hurricane strength well inland. Hurricanes and tropical storms can also produce tornadoes, most often occurring in thunderstorms embedded in rain bands well away from the center of the hurricane; however, they can also occur near the eyewall. Usually, tornadoes produced by tropical cyclones are relatively weak and short-lived, but they still pose a significant threat.

Inland flooding can result from widespread, torrential rains due to hurricanes. In fact – as we saw in Houston, Texas, last year during Hurricane Harvey – flooding is the major threat from tropical cyclones for people living inland. Flash flooding, defined as a rapid rise in water levels, can occur quickly due to intense rainfall. Longer-term flooding on rivers and streams can persist for several days after the storm. Rainfall amounts are not directly related to the strength of tropical cyclones but rather to the speed and size of the storm, as well as the geography of the area. Slower moving and larger storms produce more rainfall. In addition, mountainous terrain enhances rainfall from a tropical cyclone. Storm surge and inland flooding are more destructive forces during hurricanes than wind. 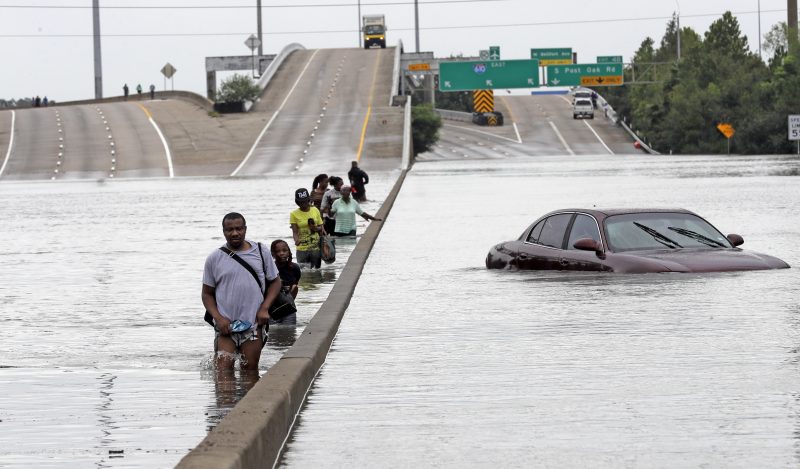