Yellowstone’s supervolcano won’t erupt anytime soon. Neither will other similar systems around the world. A new study says we’ll see many warning signs before a supervolcano erupts. 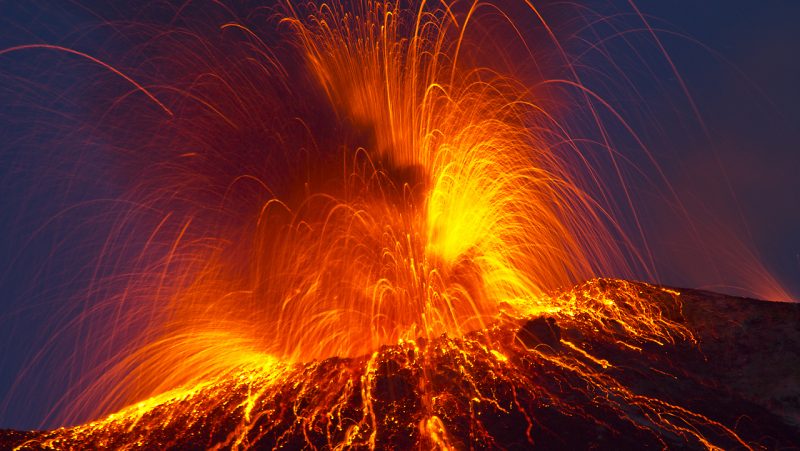 A supervolcano is a large volcano that has had an eruption of magnitude 8, which is the largest value on the Volcanic Explosivity Index (VEI). This means the volume of deposits for that eruption is greater than 240 cubic miles (1,000 cubic km).

No need to panic about an imminent supervolcano eruption, not from the Yellowstone supervolcano or another other similar system around the globe. That’s according to a new study published in the peer-reviewed journal Geophysical Research Letters on April 19, 2018. The study says that geological signs pointing to a catastrophic supervolcano eruption would be clear far in advance.

Scientists had thought that these huge volcanoes gradually built up more and more molten rock until the pressure got to be too much. But they are now realizing that much of the period between eruptions — as much as a million years — is probably quiet. To help understand how to forecast supervolcano eruptions, a team of geologists quantified the effects of tectonic stress on the rocks that house these sleeping giants.

Geologist Patricia Gregg of University of Illinois is a co-author on the study. She explained in a statement:

Supervolcanos tend to occur in areas of significant tectonic stress, where plates are moving toward, past or away from each other.

Haley Cabaniss, a PhD student at University of Illinois, is the study’s first author. Her work focuses on computer modeling of 3-D magma reservoirs of volcanos, in order to determine the how systems fail and ultimately. She explained how the models used in this study showed that tectonic stress does have a profound effect on the stability of supervolcanoes, but that these stresses aren’t the only factor to cause an eruption. She said:

Any tectonic stress will help destabilize rock and trigger eruptions, just on slightly different timescales. The remarkable thing we found is that the timing seems to depend not only on tectonic stress, but also on whether magma is being actively supplied to the volcano.

The researchers found that, in any given tectonic setting, the magma reservoirs inside supervolcanoes appear to remain stable for hundreds to thousands of years while new magma is being actively suppled to the system. Gregg said:

We were initially surprised by this very short timeframe of hundreds to thousands of years. But it is important to realize that supervolcanoes can lay dormant for a very long time, sometimes a million years or more. In other words, they may remain stable, doing almost nothing for 999,000 years, then start a period of rejuvenation leading to a large-scale eruption.

The researchers unexpectedly found that their models could help forecast supervolcano eruption timing and inform experts on what to expect, geologically, well before an eruption. Gregg acknowledged that people tend to panic whenever they hear that Yellowstone or, say, the Taupo Volcanic Zone in New Zealand, experience any change in seismic or geyser activity. But she said this new research suggests that the precursors to catastrophic eruption will be far greater and long-lasting than anything yet documented. She said:

When new magma starts to rejuvenate a supervolcano system, we can expect to see massive uplift, faulting and earthquake activity, far greater than the meter-scale events we have seen in recent time. We are talking on the range of tens to hundreds of meters of uplift. Even then, our models predict that the system would inflate for hundreds to thousands of years before we witness catastrophic eruption.

It is also important to note that our research suggests that the whole rejuvenation-to-eruption process will take place over several or more human lifetimes. Our models indicate that there should be plenty of warning.

The team created their model based on New Zealand’s Taupo Volcanic Zone. They chose this system because of its relatively uncomplicated extensional tectonic setting – the type of area often associated with supervolcanoes.

Bottom line: Before a supervolcano erupts, many warning signs will appear first, says a new study.

Read more about the study from University of Illinois.