What is the Yellowstone supervolcano?

Beneath Yellowstone National Park lies a volcanic hotspot. The most recent enormous eruption occurred 640,000 years ago. What’s going on now? 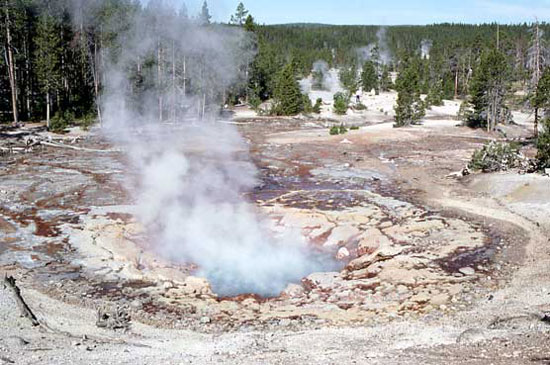 Beneath Yellowstone National Park in the western United States, lies a hot, upwelling plume of mantle. Heat from the mantle melts the overlying rocks and the resulting magma pools close to Earth’s surface. Areas such as these are known as volcanic hotspots.

Occasionally, molten rock from a hotspot will erupt.

Three enormous eruptions occurred at the Yellowstone hotspot 2.1 million, 1.3 million, and 640,000 years ago. Two of these released so much material that the area is often referred to as a supervolcano.

According to the U.S. Geological Survey,

A supervolcano is a volcano that at one point in time erupted more than 1,000 cubic kilometers of deposits.

That is enough material to fill up Lake Erie twice; Lake Erie is one of the Great Lakes, and it has a volume of 480 cubic kilometers. 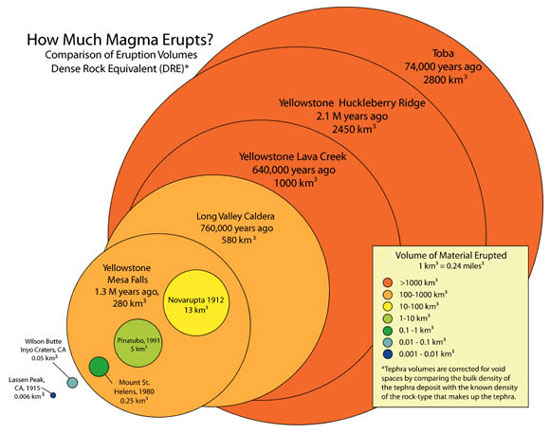 The last known eruption of a supervolcano on Earth occurred at Lake Taupo in New Zealand 26,500 years ago.

Given the incredible power of supervolcanoes, such an eruption at Yellowstone would have catastrophic consequences. One recent study estimates that another supervolcanic eruption at Yellowstone would blanket North America in ash, and some areas close to the hotspot could be covered by more than a meter of debris. Supervolcanoes can also have pronounced cooling effects on the climate for several years after an eruption because of the sulfur dioxide that is released to the atmosphere. The sulfur dioxide forms aerosols that block incoming sunlight. Eventually, the sulfur dioxide from the eruption will wash out of the atmosphere and the climate cooling effect will subside.

The Yellowstone hotspot is being monitored with numerous instruments that can detect precursors to eruptions such as earthquake swarms that indicate magma is moving beneath the surface. The monitoring data are posted to the Yellowstone Volcano Observatory website and can be viewed at the link here. Scientists think that they would be able to detect precursory activity to a catastrophic eruption by at least a few weeks or months prior to the event, thus giving them time issue any necessary warnings.