It’s highly unlikely a supervolcano will erupt at Yellowstone National Park. But, says a new study, if one did, volcanic ash would cover North America. 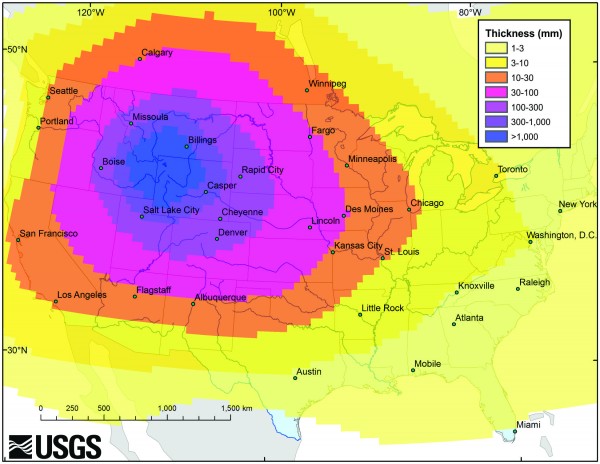 An example of the possible distribution of ash from a month-long Yellowstone supereruption. The U.S. Geological Survey created a new computer model showing this distribution. Their work showed that a hypothetical, large eruption would create a distinctive kind of ash cloud known as an “umbrella,” which expands evenly in all directions. Ash distribution will vary depending on cloud height, eruption duration, diameter of volcanic particles in the cloud, and wind conditions, according to the new study. Image via USGS

Despite the high interest in it, scientists say it’s not likely a supervolcano will erupt at Yellowstone National Park anytime in the near future. And, if one did, the effects of the eruption would vary depending on the strength of the eruption, wind conditions at the time, and other factors. Still, according to a new study by the U.S. Geological Survey, a month-long Yellowstone supereruption would blanket the northern Rocky Mountains in “meters of ash.” Meanwhile, cities as far away as New York City, Los Angeles and Miami would receive their own fine dusting of millimeters of ash. In other words, a Yellowstone supervolcano would cover North America with ash, from sea to sea.

The researchers said in a press release:

A giant underground reservoir of hot and partly molten rock feeds the volcano at Yellowstone National Park. It has produced three huge eruptions about 2.1 million, 1.3 million and 640,000 years ago. Geological activity at Yellowstone shows no signs that volcanic eruptions, large or small, will occur in the near future. The most recent volcanic activity at Yellowstone — a relatively non-explosive lava flow at the Pitchstone Plateau in the southern section of the park — occurred 70,000 years ago.

These researchers say their improved computer model – whose outcomes are published in the journal Geochemistry, Geophysics, Geosystems – shows that a hypothetical, supereruption at Yellowstone would create a distinctive kind of ash cloud known as an umbrella.

As its name implies, this cloud would expand evenly in all directions, sending ash across North America. Ash distribution will vary depending on cloud height, eruption duration, diameter of volcanic particles in the cloud, and wind conditions, according to the new study. 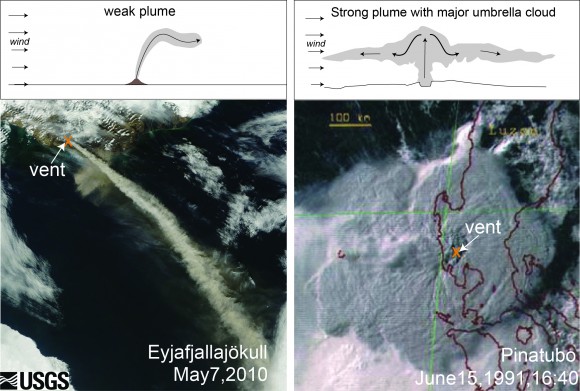 The figure above shows illustrations of plume shapes that would result from different types of volcanic eruptions. A weak plume (left) typically forms above small eruptions such as the April-May 2010 eruption of the Eyjafjallajökull volcano in Iceland, as shown in this NASA Earth Observatory image. A strong plume with a major umbrella cloud (right) forms during very large eruptions, such as shown in this Japanese Meteorological Agency image of the Pinatubo cloud on June 15, 1991. During superuruptions, umbrella clouds from strong plumes may push their way hundreds or thousands of kilometers upwind. Image via USGS

A supereruption is extremely unlikely, the study notes. However, if one occurred, it could shut down electronic communications and air travel throughout the continent, and alter the climate.

Researchers at the U.S. Geological Survey used a hypothetical Yellowstone supereruption as a case study to run their new model that calculates ash distribution for eruptions of all sizes. The model, called Ash3D, incorporates data on historical wind patterns to calculate the thickness of ash fall for a supereruption like the one that occurred at Yellowstone 640,000 years ago.

The new study provides the first quantitative estimates of the thickness and distribution of ash in cities around the U.S. if the Yellowstone volcanic system were to experience this type of huge, yet unlikely, eruption. 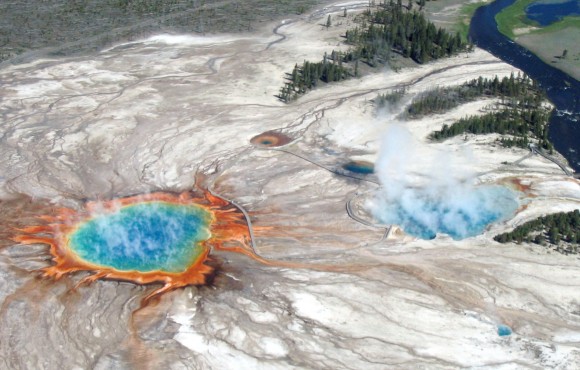 An aerial flight over Yellowstone’s Midway Geyser Basin in 2004 shows Grand Prismatic Spring and Excelsior Geyser Crater, which drain into the nearby Firehole River. Image via USGS

Bottom line: If the Yellowstone supervolcano were to erupt – an unlikely scenario, scientists say – cities close to volcano could be covered by more than a meter (a few feet) of ash. There would be centimeters (a few inches) of ash in the Midwest, while cities on both coasts would see millimeters (a fraction of an inch) of accumulation, according to the new study that was published online on August 27, 2014 in Geochemistry, Geophysics, Geosystems, a journal of the American Geophysical Union. The paper has been made available at no charge via onlinelibrary.wiley.com.