Categorized on Thursday as a “super typhoon” at its peak, Usagi is the strongest cyclone so far in 2013. It’s expected to weaken before striking Hong Kong on Sunday.

One of the strongest tropical cyclones in at least eight years has formed in the western Pacific Ocean and is moving toward Hong Kong. Categorized as a “super typhoon” at its peak on Thursday (September 19, 2013), Usagi swept through the Luzon Strait separating the Philippines and Taiwan on Saturday (September 21), bringing torrential rains and high winds to island communities. On Saturday morning, Usagi’s maximum sustained winds were at 139 mph with gusts exceeding 163 mph. A storm achieves super typhoon status when winds reach 150 mph. In other words, Usagi is weakening slightly.

It is expected to impact Hong Kong by Sunday, September 22. Before it makes it to Hong Kong, Usagi is expected to weaken still more. Currently, it is a Category 4 storm with sustained winds near 140 mph. By the time it nears Hong Kong, the Joint Typhoon Warning Center expects the system to be a Category 1 or weak Category 2 storm with wind speeds around 90 to 100 mph. Regardless of how much this storm weakens, it will create heavy rains, flash flooding, and storm surge along the southeast coast of China.

On Thursday, at the storm’s peak, Usagi had sustained winds of 160 miles per hour, plus estimated wind gusts near 195 mph. Super Typhoon Usagi has been over very warm ocean waters as it has pushed to the west-northwest. With the wind speeds and pressure combined, Usagi is the strongest storm to have formed in 2013. The last time we saw a storm this strong was in 2005, when Major Hurricane Wilma formed as an extremely strong tropical cyclone in the Atlantic Ocean. 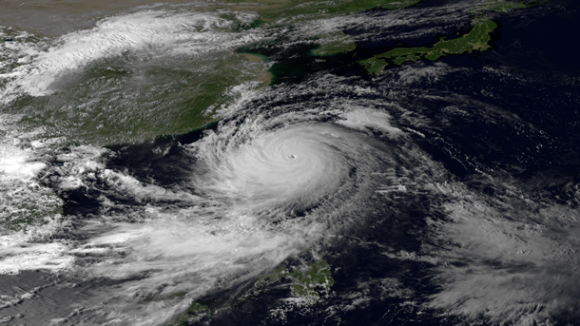 The Japan Meteorological Agency’s MTSAT-2 satellite acquired this image at 0730 UTC on September 20, 2013. Image via NOAA. 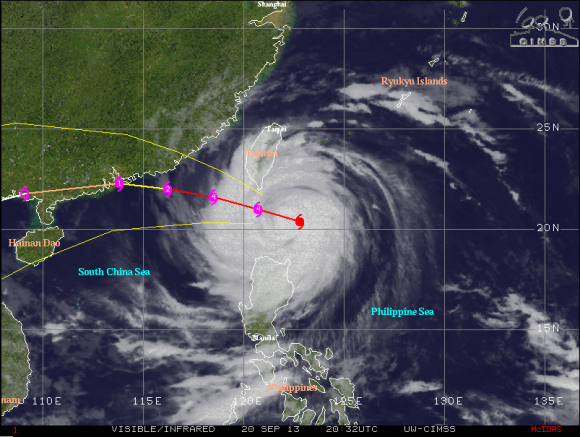 Track of Typhoon Usagi. Hong Kong should be getting ready for a strong storm. Image via CIMSS 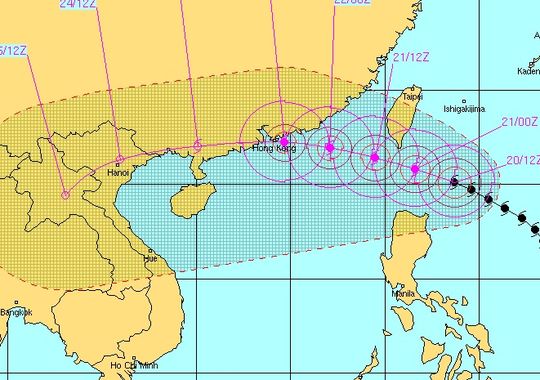 Another look at the forecast track for Typhoon Usagi (the purple dots and circles) shows it moving west between Taiwan and the Philippines before heading directly into China and Hong Kong. Image via the Joint Typhoon Warning Center. 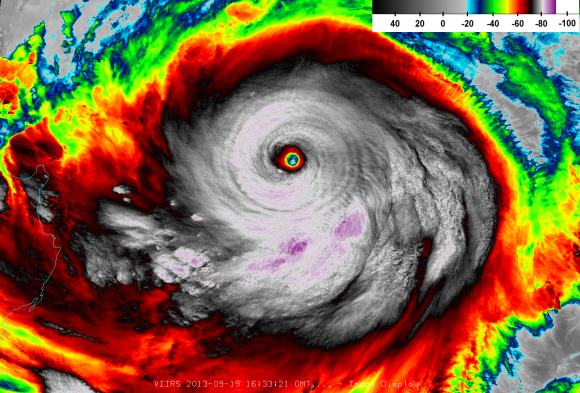 Bottom line: Super Typhoon Usagi is the the strongest cyclone so far in 2013. It is expected to weaken and impact parts of southeast China, in particular Hong Kong, by Sunday, September 22. Usagi could potentially slam Hong Kong with heavy rain, flash flooding, and strong winds.