Super Typhoon Bopha will hit the Philippine island of Mindanao early Tuesday morning (December 4, 2012) as a Category 4 or 5 storm. 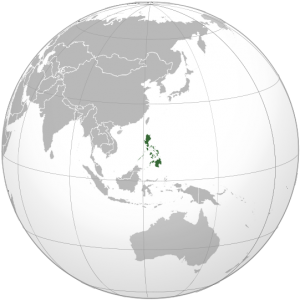 A very strong and dangerous typhoon has formed in the western Pacific Ocean and will hit the Philippines by Tuesday, December 4, 2012.

Super Typhoon Bopha, has estimated wind speeds around 160 miles per hour with gusts over 195 miles per hour, or roughly 170 knots. Bopha is expected to slam into the island of Mindanao and hit near the village of Hinatuan by early tomorrow morning. As of now, Bopha is traveling to the west-northwest at approximately 15 mph and has rapidly deepened into a monster storm overnight. The eye is well defined and is roughly 9 nautical miles wide. The storm is currently 630 nautical miles southeast of Manila, Philippines. Millions of people are in the path of this dangerous storm, and many people in this region are not prepared for such a violent storm. The size of the storm is relatively small, and the most concentrated area of hurricane-force winds are approximately 30 nm away from the center of the storm (eyewall). Everyone living in the Philippines needs to be prepared for a Category 4 or 5 storm on the Saffir Simpson scale with winds over 135 mph.

According to Jeff Masters of Weather Underground, Bopha became a typhoon on November 30, 2012 at 3.8 degrees north latitude, which makes this storm the most southerly typhoon on record in the western North Pacific basin. Why is this significant? At the equator, the Coriolis force is zero. The Coriolis force is simply a large scale force that provides the spin in low and high pressure systems. In other words, you rarely see significant areas of low pressure developing so close to the equator is due to the lack of the Coriolis force. The record for the most southerly super typhoon to form was Kate back in 1970, which reached super typhoon intensity at 6.0°N, 126.3°E. The last time the Philippines experienced such a damaging tropical system was last year when Tropical Storm Washi produced massive amounts of rain which resulted in flooding that killed at least 1500 people. In fact, Washi of 2011 was ranked number three in my list for the top five natural disasters of 2011.

As of now, an anticyclone in the upper atmosphere is providing decent outflow and ventilation for the storm to maintain strength. The storm is expected to push more to the northwest in the next 24-36 hours and will push through portions of the southern and central Philippines. Manila will not experience the full wrath of Super Typhoon Bopha, but tropical storm force winds and heavy rain remain a high possibility across the capital city. As soon as it emerges west of the Philippines, the certainty becomes rather unclear as to where the storm will be steered. Everyone in the cone of uncertainty should keep a close eye on this storm as it continues to push to the northwest as a strong typhoon.

Bottom line: Super Typhoon Bopha is a dangerous storm producing sustained winds of approximately 160 mph with gusts over 195 mph. The storm should make landfall early in the morning on December 4, 2012 on the island of Mindanao near the village of Hinatuan. Flooding could be a concern for the Philippines, but fortunately, the storm should move at a decent pace and should not stall and produce widespread flooding across the region like Washi did back in December 2011. Let’s hope Bopha will be nothing like Tropical Storm Washi from 2011 that killed over 1500 people.