Washi – known in the Philippines as Sendong – brought flooding and mudslides that resulted in over 650 deaths and 800 still missing.

Tropical Storm Washi was the 27th tropical system to develop in the western Pacific typhoon season. It ultimately brought extreme flooding and mudslides that resulted in over 650 deaths with nearly 800 people still missing across the southern Philippines.

Washi formed on December 13, 2011 as tropical depression 27W. Washi formed in the north Pacific ocean and strengthened into a strong tropical storm with maximum sustained winds around 65 miles per hour. Washi intensified prior to making landfall in the Philippines on December 15, 2011. Heavy rain increased in the system, and Washi brought torrential rains and mudslides to the Philippines.

Tropical Storm Washi actually has two names. Storms that develop in each basin, such as the western Pacific and the Atlantic, are given names after reaching a minimum strength of 39 mph or higher. Each basin has a six year list that is used to name the storms. However, some countries choose to name the storms themselves. The Philippines actually named this storm Sendong. It is important to note that the media will reference Sendong as “Washi”, which is the official name of the storm in the western Pacific. For less confusion, we will call this storm “Washi” for the remainder of this post.

Image of Washi after it moves past the Philippines. Image Credit: CIMSS

Washi’s convection increased, which meant thunderstorms and heavier rain bands were increasing in the system. An increase in convection on satellite from a tropical cyclone typically shows an intensifying storm. The storm moved over the mountainous regions of the Philippines on Mindanao Island, producing nonstop rain for at least 12 hours across the region. The heavy rains ran down the mountain side causing trees to become uprooted and cars being overturned in many areas. The Red Cross in the Philippines report that at least 346 died in Cagayan de Oro and 206 in Iligan. The death toll has already reached over 650 deaths, and that number is projected to increase as many isolated villages affected by Washi have not been assisted due to the overwhelmed disaster relief personnel in other regions of the country. There could be some families completely washed out and perished. 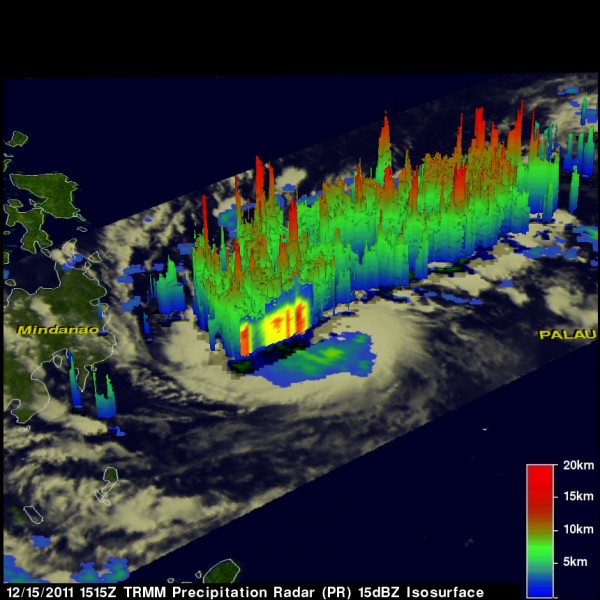 NASA’s Tropical Rainfall Measuring Mission (TRMM) satellite produced the image above late on December 15, 2011. In this image, it shows the tallest thunderstorms in the storm that reached around 15 kilometers or approximately 9.3 miles. The TRMM estimated only heavy rainfall located in the southwest quadrant of the storm early on December 15. By that evening, the storm had intensified and was showing rainfall estimates of at least two inches (50 mm) per hour in the east, north, and western quadrants. Some areas across the region, including Mindanao, saw rainfall totals you would typically see in a month in just one day. Everyone pays attention to the winds of a tropical system, but the biggest threat from any tropical cyclone is heavy rain, flooding, and storm surge. 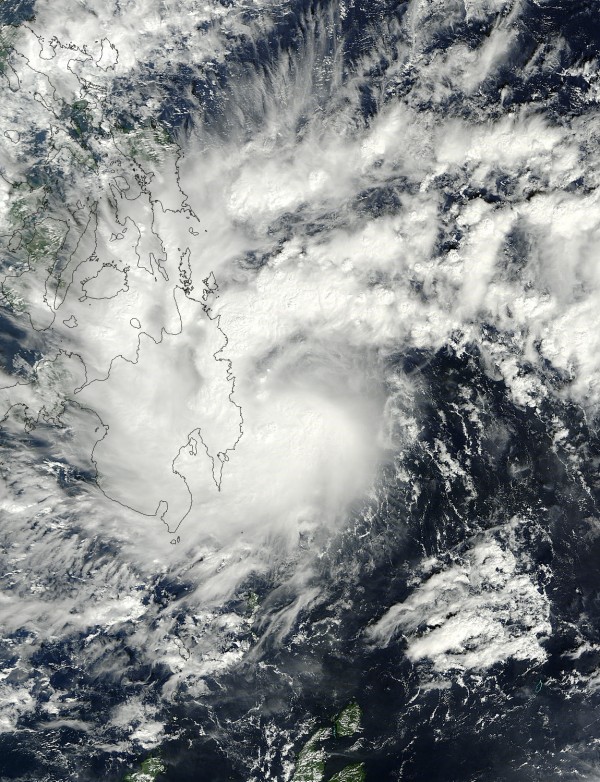 The areas hit hardest in the Philippines had never seen such widespread damage or heavy rain in their lifetime. Thousands of people had to climb up on the roof’s of their house as flood waters rose nearly three feet in one hour. People were swept out to sea while others were buried alive in mudslides due to the higher elevation in the area. The mayor of Iligan, Lawrence Cruz, said, “It’s the worst flood in the history of our city. It happened so fast, at a time when people were asleep.” The Philippine Atmospheric, Geophysical and Astronomical Services Administration (PAGASA) told residents that Washi was expected to make “landfall over Surigao del Sur early Friday afternoon and by Saturday afternoon, at 220 km East Northeast of Puerto Princesa City. By Sunday afternoon, it will be at 260 km West Northwest of Puerto Princesa City.” The last storm to compare to Washi was when tropical storm Ketsana pushed into the region back in 2009. In 2009, Ketsana killed 747 people and resulted in over a billion dollars of damage, making it the worst tropical cyclone in the western Pacific for 2009.

Bottom line: Tropical Storm Washi, commonly known as Sendong in the Philippines, has killed over 650 people and the death toll is expected to climb as nearly 800 people are still missing. Washi pushed into the Philippines late Friday on December 16, 2011 and brought up to nearly eight inches of rain. Flooding caused mudslides, overturned cars, and left thousands homeless. As of now, over 20,000 soldiers are currently performing a search and rescue to find the survivors after the devastating floods pushed into the area. The hardest hit areas include major ports of Cagayan de Oro and Iligan, on the north coast of the island of Mindanao. All prayers go out to the victims from tropical storm Washi.