Officials have lowered the death toll to 24 confirmed deaths and hundreds of injuries from the massive tornado that struck Moore, Oklahoma yesterday.

May 21, 2013, 900 a.m. CDT (May 21 at 1400 UTC) — Officials have now lowered the death toll after a potential one-mile-wide EF-5 tornado swept through tracts of homes, two schools and a hospital in Moore, Oklahoma, a suburb of Oklahoma City, yesterday afternoon. The medical examiner’s office has revised the death toll from an anticipated 91 deaths earlier today, to at least 24 deaths, including 9 children. Officials say the lower number is due to unintentional over-counting of fatalities in the immediate aftermath of the tornado. The National Weather Service said the tornado was on the ground in Moore for 40 minutes. Emergency crews spent last night at a school in Moore, trying to rescue students and staff trapped by falling debris. The tornado turned hundreds of homes in some neighborhoods in Moore – in southwest Oklahoma City – to rubble and set fires. It is reported to have “wiped out entire neighborhoods” and to have left a wide path of debris.

Text ‘redcross’ to 90999 to donate $10 for Oklahoma disaster relief. You’ll receive a confirmation via text.

The Storm Prediction Center has issued another moderate risk – mainly a wind damage threat, but tornadoes are possible, too – in northeast Texas, northern Louisiana, and into central/southern Arkansas. Look here for the storm outlook.

Everything you need to know: How to stay safe in a tornado

Debris ball on radar indicated a tornado was coming.

May 20 tornado is one of several in the central U.S. in past few days.

A previous deadly tornado in Moore.

More photos and videos of May 20 tornado in Oklahoma.

View live video and rescue efforts in Oklahoma from WFMY-TV

Mile-wide tornado spent 40 minutes on the ground in Moore, Oklahoma, a suburb of Oklahoma City, on May 20, 2013. Image is a video still from CBS News. 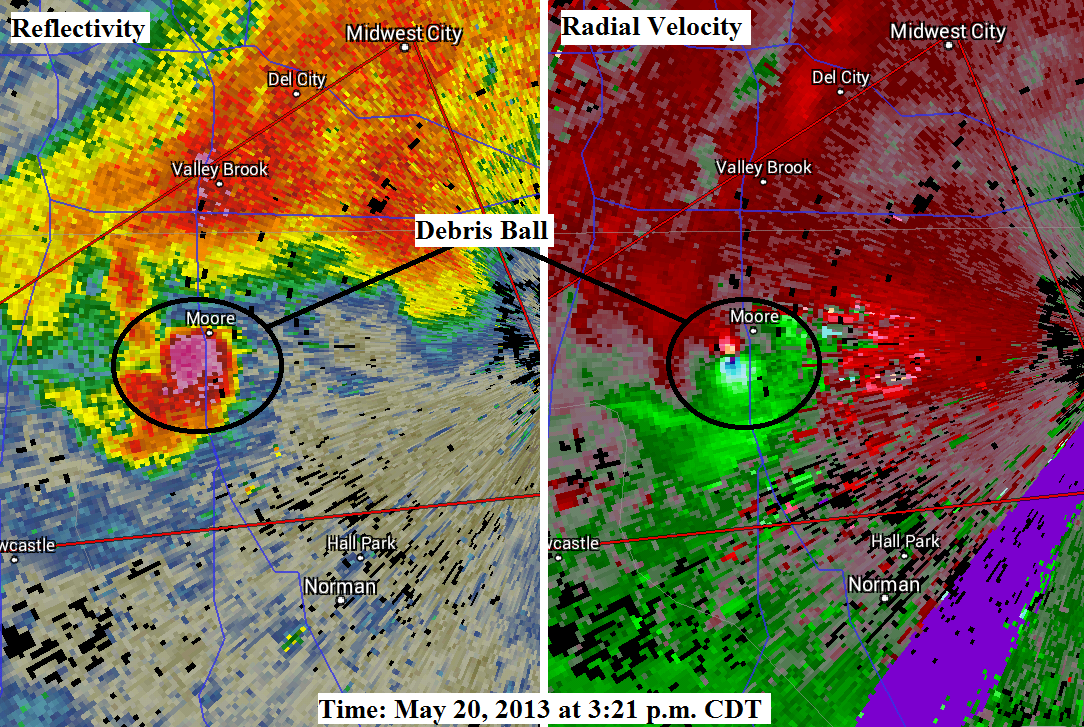 View larger. | A debris ball created by the tornado showed up on radar, giving advance warning of its deadly power. 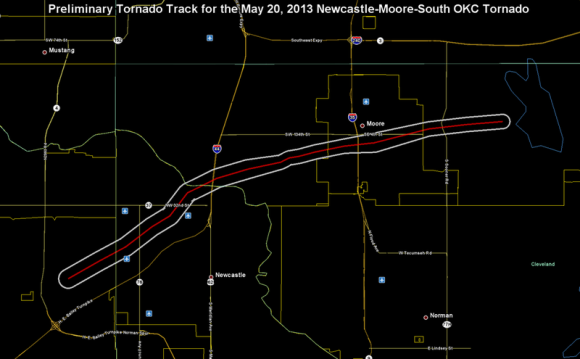 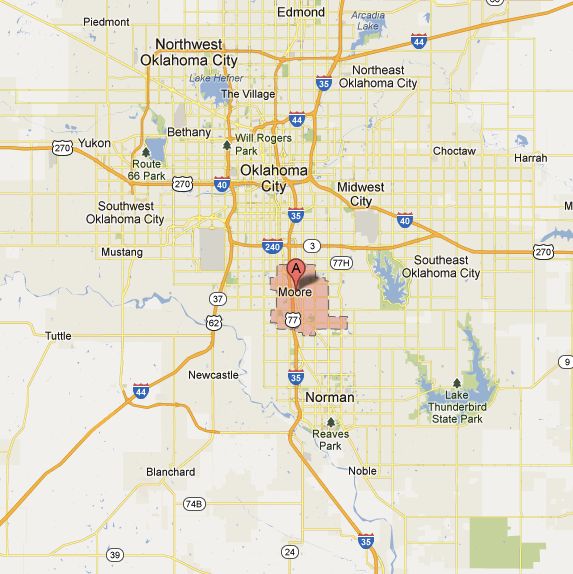 Moore, Oklahoma, a suburb of Oklahoma City, in the central part of the state.

Debris ball on radar indicated a tornado was coming. At 3:21 p.m. CDT on May 20, a supercell was pushing right towards Moore, Oklahoma. It was apparent on Doppler radar as the storm was indicating a debris ball. A debris ball simply indicates debris that is lofted into the air by a tornado. The debris could be anything: pieces of houses, vehicles, paper, insulation, trees, etc. The radar beam hits this debris, and it picks up very high reflectivities. The debris ball simply shows a circular area of very highly concentrated reflectivity that shows up in dark red and purple. At one time, the debris ball was nearly two miles wide. It does not mean the tornado itself was two miles wide, but it definitely indicates that the tornado was at least a mile wide as it hit. Meanwhile, the radial velocity image on the right simply shows the strong couplet signature indicating very strong winds moving away and towards the radar. It indicates the strong rotation within that single point, and that is where the tornado is located.

Advance warning systems for tornado worked. It’s easily possible that this horrible event might have been even more deadly, but for the fact that it was warned well in advance. The Storm Prediction Center issued a moderate risk for severe weather across central and eastern Oklahoma for May 20. Many were aware that a volatile situation could take place. Meteorologists cannot determine hours in advance exactly where a storm will produce a tornado, but we can be weather aware and be knowledgeable that something could develop. With that said, the National Weather Service from Norman, Oklahoma was able to issue a warning in advance and provide the city of Moore, Oklahoma with some time to prepare. According to the NWS in Norman, Oklahoma, the Newcastle-Moore Oklahoma City Tornado was on the ground for approximately 40 minutes. The tornado warning they issued was in effect for 16 minutes before the tornado developed.

May 20 tornado is one of several in the central U.S. in past few days. Look here for video and photos of May 18-19 tornados in central U.S.

A previous deadly tornado in Moore. Moore, Oklahoma was hit by a previous tornado on May 3, 1999. The 1999 Bridge Creek–Moore tornado was an extremely powerful F5 tornado. According to the Storm Prediction Bureau, the tornado lasted one hour and 25 minutes, covering 38 miles (61 km), destroying thousands of homes, killing 41 people, leaving $1 billion in losses behind and ultimately ranking as the third-costliest tornado on record, not accounting for inflation. By the way, Moore residents had 32 minutes lead time – advance warning from meteorologists – to get ready for the 1999 tornado. Although the lead time was somewhat less in the May 20, 2013 event, both the 1999 and the 2013 tornados in Moore, Oklahoma benefited from more lead time than the averages earlier in the 1990s, around 5 minutes.

Television coverage from the Associated Press, below, shows flattened buildings and at least one fire after a mile-wide tornado tore through the Oklahoma City area. Homes and buildings in Moore, Okla., were reduced to rubble and vehicles littered roadways. 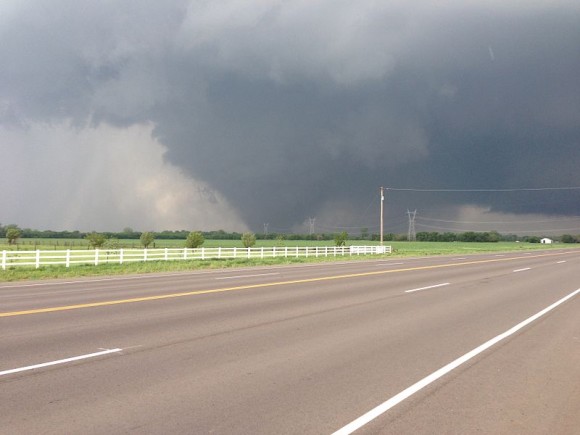 The May 20, 2013 tornado as it passed south of Oklahoma City. Photo by Ks0stm via Wikimedia Commons.

The images below are video still from KFOR-TV. Local television stations typically provide the best, sometimes the only, immediate coverage of events such as this one. 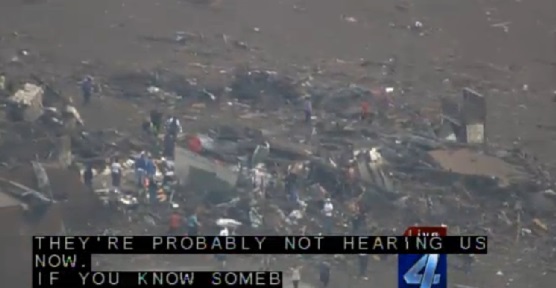 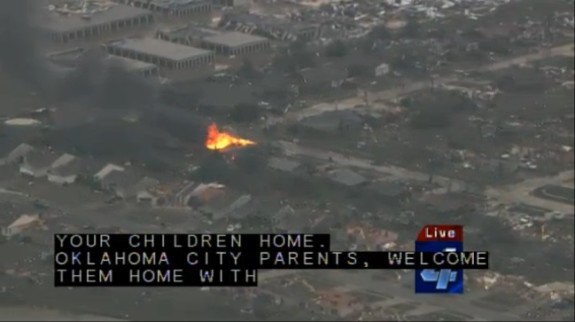 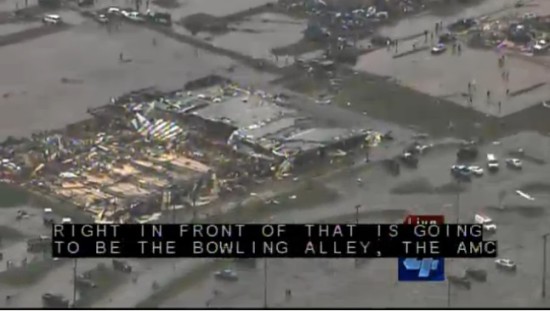 We will update on the May 20, 2013 tornado as more information becomes available.

Bottom line: A potential one-mile-wide EF-5 tornado spent 40 minutes on the ground in Moore, Oklahoma, yesterday (May 21, 2013). Moore is a suburb of Oklahoma City. The tornado ripped through tracts of homes, two schools and a hospital. Officials have confirmed at least 24 deaths and hundreds of injuries from the massive tornado.