Incredible videos and photos of tornadoes in central U.S. May 18-19

Videos and photos of tornadoes that pushed through the central U.S. this past weekend. Warning: some are graphic. More severe weather expected today. 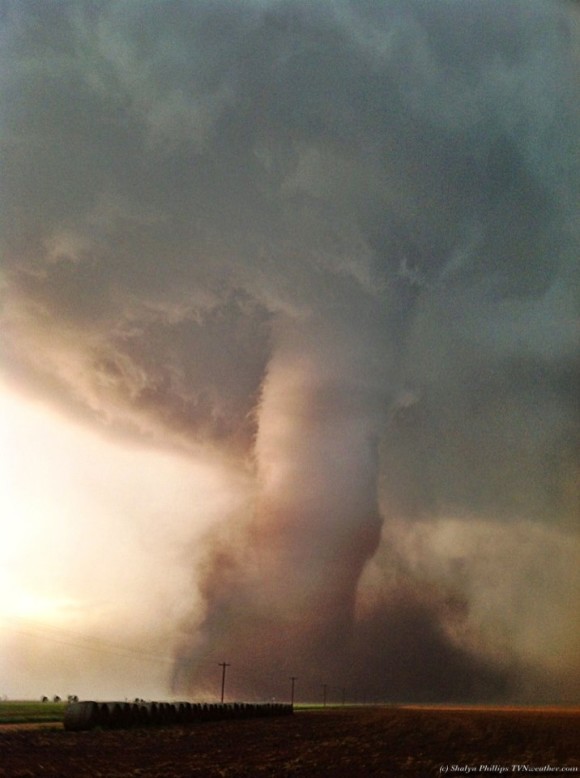 Information and photos of May 20, 2013 tornado in Oklahoma City area – the Moore, OK tornado

A very dynamic and strong storm system brought severe weather across the Central United States this past weekend (May 18-19, 2013). The Storm Prediction Center highlighted parts of Oklahoma, Kansas, and parts of Missouri into a moderate risk to see severe thunderstorms on Sunday, May 19. The entire weekend featured many dangerous storms that produced large hail, strong winds, and violent tornadoes. Wichita, Kansas and Oklahoma City, Oklahoma were extremely close to having strong tornadoes directly affecting the cities. However, these cities were spared. However, some cities such as Shawnee, Oklahoma were devastated as a strong tornado severely damaged and destroyed homes in the area. As of now, one death has been reported from this severe weather outbreak. This post contains pictures and videos of the tornadoes that pushed through the Central U.S. this past weekend. Warning: some of these images and videos are graphic. Prayers go out to all of the victims involved in these deadly storms.

First up … the incredible tornado video below comes from Lawrence McEwen, who managed to shoot footage of the large wedge tornado that tore through Lincoln County, Oklahoma around 5 p.m. CDT on Sunday (May 19, 2013) evening: 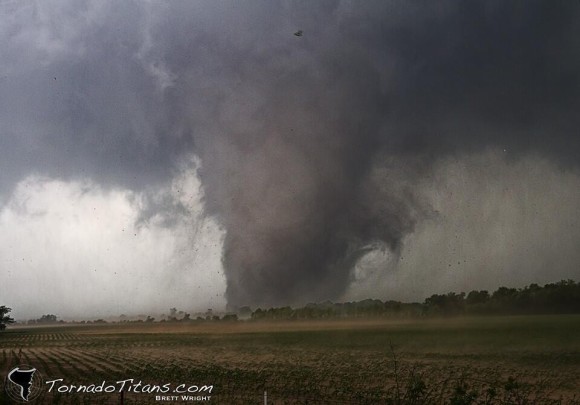 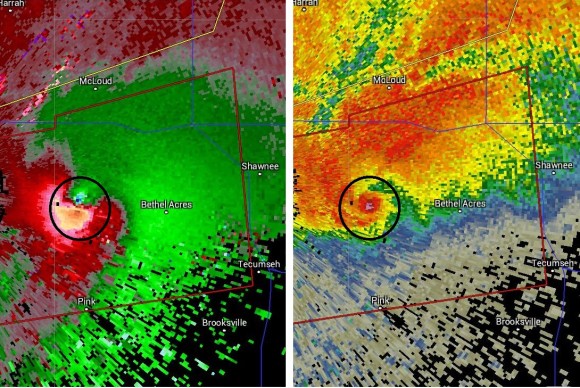 A dangerous tornado was depicted through radar as a debris ball developed indicating debris lofted into the air from a tornado. This is the storm that caused significant damage to Shawnee, Oklahoma.

A supercell thunderstorm developed a possible tornado near Norman, Oklahoma on Sunday, May 19, 2013. The storm began to intensify and the tornado within the system was becoming better defined through radar. By the time it got near Bethel Acres, Oklahoma, radar was indicating a debris ball signature on reflectivity. When you see high reflectivity where the tornado signature is located, or bright colors such as red and purple on radar, it indicates that debris has been lofted into the air and the radar beam is depicting large items in that area. When you look at the velocity image, it was blatantly obvious that a large and dangerous tornado was going to affect Shawnee, Oklahoma. Unfortunately, the radar scans corresponded with the aftermath as the tornado destroyed parts of the city of Shawnee. As of now, there appears to be injuries and possibly deaths from this particular storm. Just by looking at the damage, this tornado could easily be an EF-4 tornado with winds over 170 miles per hour. We will know more later today (May 20) when the National Weather Service surveys the damage. 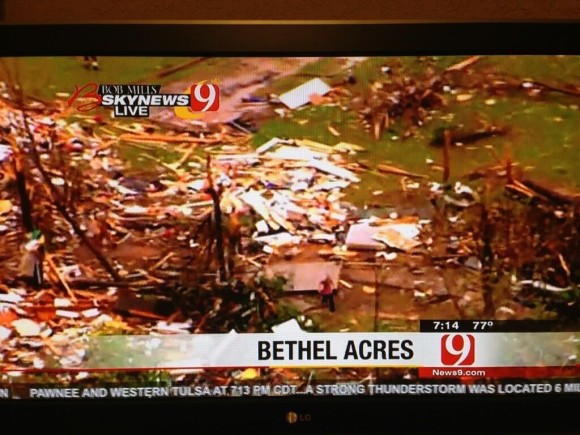 About this upcoming video, posted by Brandon Sullivan:

Brett Wright and myself documented multiple strong to violent tornadoes today across central Oklahoma. The first shot is approx 2 miles west of Shawnee, OK.. This was some of the most violent motion we have ever witnessed and you can hear the roaring motion as the tornado tears across the land.. This tornado then went on to cause significant damage in Shawnee, Oklahoma.. The second clip is from approximately 4 miles west of Shawnee, Oklahoma and is a powerful multi vortex/wedge tornado…. The third and fourth clips are from near Luther, Oklahoma.. This storm produced the tornado near Edmond, OK earlier in the day.. The final clip is the cone tornado near Edmond, OK earlier in the event. Our thoughts are with everyone impacted.. It is always a humbling experience to see these violent creatures.

Jeff and Carmen Tyler shot the large tornado in the video below just before 5 p.m. CDT just northeast of Oklahoma City, Oklahoma: From Reed Timmer:

This tornado was one of the strongest ever intercepted … I have never felt vibration like that before as we were slammed by suction vortices wrapping all around the vehicle.

This weekend’s severe weather was not the last of it. More severe weather is expected today across the U.S. Central Plains and will be pushing eastward near the Midwest. The Storm Prediction Center has issued another moderate risk for severe storms across Oklahoma, southwest Missouri, northwest Arkansas, and parts of northeast Texas. Winds over 60 mph, large hail, and strong tornadoes are all possible in the moderate risk areas. The activity will likely begin once again in the late afternoon and evening hours as these places warm up and the atmosphere becomes very unstable. Be weather ready, and avoid driving on the roads when the storms begin to fire up.

Bottom line: Severe weather developed across the central United States this weekend (May 18-19, 2013), producing damaging winds, large hail, and tornadoes. Some of the tornadoes that developed were extremely large, and a large tornado struck Shawnee, Oklahoma and devastated the area. It is unclear at this time as to how many homes were destroyed. Severe weather threat continues Monday and Tuesday across the central and eastern United States. Be weather prepared if you are in a risk area for severe weather (Oklahoma, southwest Missouri, northwest Arkansas, and parts of northeast Texas).