Six dead in Oklahoma after at least 121 tornadoes overnight April 14, 2012

At least six people died early Sunday after a tornado hit in Woodward, Oklahoma. Most of last night’s tornadoes struck in Kansas. The outlook for today shows the most intense storms in Minnesota, Wisconsin and Iowa.

UPDATED APRIL 15, 2012 5:30 CST (10:30 UTC) Officials in Oklahoma are reporting six people who died early Sunday after a tornado hit in and around the town of Woodward, Oklahoma in the northwest part of the state. Oklahoma Department of Emergency Management spokeswoman Keli Cain confirmed the deaths to StLToday.com and said she didn’t know the gender or age of the victims or details of their deaths.

By the morning of April 15, 2012, there had been 121 preliminary reports of tornadoes across the U.S. Central Plains. Most were in the state of Kansas, but tornadoes were also reported in Iowa, Nebraska, Oklahoma and north Texas. As expected by the National Weather Service and Storm Prediction Center, the action began in late afternoon and early evening, with storm chasers sending back reports, video and images of tornadoes until dark, when the tornadoes became more difficult to spot.

The forecast for today calls for continued severe storms, with the most intense storms located further north, around Minnesota and Wisconsin and Iowa. NOAA’s Storm Prediction Center said in an outlook for April 15, 2012: 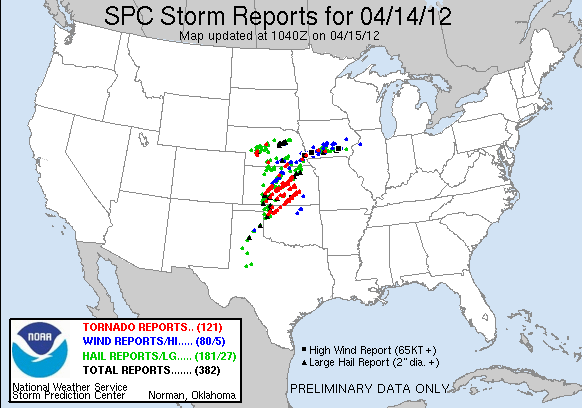 Before dawn on April 15, 2012, there had been 121 preliminary reports of tornadoes across the U.S. Central Plains. Most tornadoes were reported in the state of Kansas. Image Credit: Storm Prediction Center.

The outlook from NOAA’s Storm Prediction Center for April 15, 2012 shows the region of most intense storms further northward than on April 14, over northern Illinois, Minnesota, Iowa and Wisconsin.

Kansas A tornado swept through southern Wichita, Kansas on April 14, 2012 causing significant damage but no major injuries or deaths. Read more about the tornado in Wichita.

Iowa Emergency officials in Iowa said that high winds or a tornado damaged a hospital in Creston, Iowa No injuries were reported there. In Thurman, Iowa, about 75 percent of the town was destroyed by a possible tornado, according to Fremont County Emergency Management Director Mike Crecelius speaking to The Associated Press. He said there were no injuries and no deaths in Thurman, a town of about 250 people.

Oklahoma. At least five people died early Sunday after a tornado hit in and around the town of Woodward, Oklahoma in the northwest part of the state. Officials also said there are damaged houses, a hospital, a jail, an Air Force base and other buildings in that area. The brunt of the damage was reported on the west side of the town of about 12,000, and in the neighboring community of Tangier. Read more about the tornadoes in Oklahoma here or here.

Wedge tornado outside Salina, Kansas around 6 p.m. on Saturday, April 14, 2012. Image via Mark Elliot on TwitPic.

April 14, 2012 tornado outside Crawford, Kansas via Manuel Flores on Twitter

POSTED APRIL 14, 2012 22:30 UTC (5:30 CST). Days in advance, the models were showing a looming tornado outbreak for the U.S. Central Plains (especially Oklahoma, Kansas, Nebraka) for April 14, 2012. The Storm Prediction Center (SPC) out of Norman, Oklahoma highlighted it several days before today. On the SPC’s Day 3 outlook, they already showed a moderate risk for severe storms across the Central Plains. By yesterday, they issued a rare high risk. At this writing, the storms are developing and getting stronger in the U.S. central plains. The dynamics are in place for a significant afternoon and evening to see severe thunderstorms that can produce large hail as big as baseballs and softballs, wind gusts over 80 miles per hour, and strong, long-track tornadoes. The tornadoes that do form have the potential to become EF-3 or stronger with winds over 150 mph. The biggest areas of concern are across Central Oklahoma, central and eastern Kansas, and central and eastern Nebraska where the SPC has issued a high risk for severe storms.

Radar imagery of the severe weather outbreak across the Central Plains at 5 p.m. CST on April 14, 2012. Image Credit: NWS

A rather large area of the high risk stretches from Oklahoma into Nebraska. Image Credit: SPC

It is important to note that the risk areas show the greatest concentrated area to see significant severe weather. However, those in the slight or moderate risk areas could still see strong, violent tornadoes and significant damage. Just because you are in a slight risk does not mean you are out of the woods.

Before we look into the meteorology of this ongoing outbreak, I want to emphasize safety.

1) STAY HOME! Please avoid driving if you are anywhere in the moderate or high risk areas. Stay inside and monitor the weather as it unfolds. If you have outdoor plans or activities, cancel them.

3) SLEEP IN YOUR BASEMENT/SAFETY AREA: These storms are expected to continue to produce violent weather during the overnight hours while you try to go to sleep. If you do fall asleep, sleep in your safety spot.

4) WEAR A HELMET! Helmets save lives during tornado outbreaks. Flying debris is one of the main causes of serious injuries and death. If you have one, wear it.

5) DO NOT RISK YOUR LIFE TAKING PICTURES AND VIDEO! These storms will be moving rapidly to the northeast at speeds around 50 mph. If there is damage, do not drive to these areas that are hit. Only local emergency ambulances should be out on the roads after a possible tornado hit.

6) USE TWITTER AND SOCIAL MEDIA RESPONSIBLY! Meteorologists depend on viewers to get an idea of what is going on in certain areas. Please do not retweet or share information that is old. For instance, do not share a tweet or status update of a tornado warning that was issued two hours ago. Also, please do not photoshop or steal images online claiming they are from today’s tornadoes. I have seen my share of images, and I know what is fake or what is real. Be responsible and smart.

For more details on weather safety, please click on the link below:

A warm front is stretched across southern Nebraska and is unleashing a potential flooding threat and severe storms capable of producing strong tornadoes. Further south, a dry line is sparking severe storms across western portions of Kansas and Oklahoma. The dry line will be the main focus later this evening as storms will continue to fire up along this boundary. Strong winds around 20 to 30 mph are blowing across the Plains as there is a tight pressure gradient between the strengthening storm system and the high pressure to the east. The SPC hints that cooling aloft with the upper trough may be more advanced than previously thought with temperatures around -12 to -13 degrees Celsius. What does that mean? It means more instability and fuel for the thunderstorms to grow in size and intensity.

The tornado threat will increase in the evening and overnight hours on April 14, as the cold front pushes eastward. Winds will be veering with height which will support supercells capable of producing violent tornadoes. STP, or Significant Tornado Parameter, which measures helicity (spin in the atmosphere), wind shear, and instability is really high at the moment. The scale goes from 0-10 with anything over a 1 is considered significant. As of 4:30 p.m. CST on April 14 (21:30 UTC), STP values are over 5 and 6 across western Oklahoma and Kansas. Here are the values the NAM model was indicating this afternoon for this area tonight around 7 p.m. CST tonight (April 14, 2012). Numbers are through the roof:

Storms will likely be discrete and isolated through the evening hours up until midnight tonight. During these hours, the tornado threat is the greatest. By then, the storms will likely merge together to form into a potent squall line capable of producing straight line winds over 80 mph, large hail, and tornadoes. When the storms become a solid line of storms, the threat for long lived violent tornadoes will diminish. However, squall lines can easily spin up tornadoes, but most of the time, these tornadoes are weaker. Regardless, don’t let your guard down!

Bottom line: If you live in Oklahoma, Kansas, Nebraska, Iowa, and even western Missouri, you should be ready and prepared for severe storms capable of producing strong winds over 80 mph, large hail, and strong tornadoes in evening and overnight on April 14, 2012. Flooding could be a threat across southern Nebraska as storms continue to produce heavy rain. The threat will not diminish now. It will continue through the evening and overnight hours. Avoid travel, be smart, and be safe. I will be tweeting about these storms throughout the evening. Please feel free to follow me: @athensgaweather.

Follow Matt Daniel on Twitter for the latest weather updates on the April 14, 2012 tornado outbreak in the central U.S.