The weather pattern over the United States is poised to change once again, pushing most of the country back to where we were back in December 2011: warm.

A few weeks ago, I mentioned a significant pattern change that would occur towards early to mid-January 2012 across the United States. The pattern has evolved to provide snow in areas that should see snow such as the northeast and around the Great Lakes region. Even a few Alberta Clippers pushed south to form a few snow showers across the southeast in portions of Alabama, Georgia, Tennessee, and Kentucky. The weather pattern that has now developed over the United States is poised to change once again, pushing most of the country back to where we were back in December 2011: warm. There are many factors as to why these cold spells have been temporary in the east, and the main contributing factor is the North Atlantic Oscillation (NAO) which has been predominantly positive for all of this winter. The outlook for the remainder of January 2012 shows warmer than usual weather across the majority of the United States, with unsettled weather along the northwest and Alaska.

The Climate Prediction Center from NOAA released the six to 10-day temperature outlook for the United States:

Take a look at the eight- to 14-day outlook:

The NAO is projected to be strongly positive for the remainder of January 2012 which only means no cold spells for the eastern half of the United States and unsettled weather across the Pacific northwest. There are a lot of contributing factors that can sustain the cold, but the main focus is the NAO. Last year at this time, the NAO was negative for a long duration. It contributed to the widespread cold and snow across the United States. This year, we are the complete opposite with temperatures staying above average. Temperatures could warm into the 70s by this weekend (January 21-22, 2012) across the majority of the south. Temperatures will likely be 10-20 degrees above average for a large portion of the United States.

Here’s the projected NAO for the remainder of January. This is a forecast from the 0z GFS model run on January 16, 2012. Note: the GFS wants to push the NAO back to negative territory by February. Will this occur? Only time will tell.

Unsettled weather for the Pacific Northwest 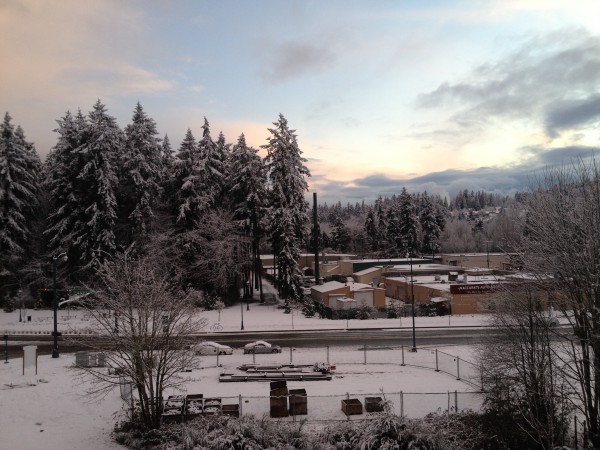 Snow in Seattle, Washington this weekend could be a preview for what’s to come. Image Credit: Bryan Higa

Unlike the majority of the United States in the upcoming weeks, unsettled weather will be the dominant story for this region. Cold weather and snow fell over parts of Seattle, Washington this past weekend. A wide range of snow totals fell across western Washington with some areas receiving almost nine inches of snow in higher elevations. These same areas are actually bracing themselves for another storm system that should affect the region come Tuesday evening (January 17, 2012) and into Wednesday. Roads could become icy, and the location of the low pressure system could greatly affect snow totals. It’s very possible that some areas could see over a foot of snow in higher elevations. The National Weather Service has issued a winter storm watch for parts of Washington. Here’s what the National Weather Service is stating:

THERE IS THE POTENTIAL FOR A MAJOR WINTER STORM FOR THE WESTERN WASHINGTON LOWLANDS ON WEDNESDAY. WINTER STORM WATCH IN EFFECT FROM WEDNESDAY MORNING THROUGH WEDNESDAY EVENING. SPECIFIC SNOW ACCUMULATIONS ARE TOUGH TO PIN DOWN AT THIS POINT BUT THE POTENTIAL FOR A SIGNIFICANT SNOW EVENT FOR THE LOWLANDS EXISTS WEDNESDAY INTO WEDNESDAY EVENING. SOME OF THE AFFECTED LOCATIONS INCLUDE SEATTLE, EVERETT, OLYMPIA, BELLINGHAM, AND PORT ANGELES.

This upcoming storm could be dangerous, so the National Weather Service is not taking anything for granted. The models have been showing a lot of inconsistencies, which is why the weather service never stated snowfall totals in their special weather statements. Normally, weather balloons are released into the atmosphere to retrieve valuable information that goes into the weather model runs. However, information across the northern Pacific Ocean is limited since it’s difficult to launch these radiosondes in the open waters. With that in mind, NOAA will fly out into the storm to drop weather instruments to gather information on the storm and determine the upper level flow which will influence the path and intensity of the storm as it approaches the west coast Tuesday night (January 17, 2012) into Wednesday. The biggest questions will be the phasing of cold air with the precipitation as the storm pushes east. Once this information is gathered, it will be added into the model runs and will hopefully benefit the meteorologists and provide them opportunities to create a more precise forecast. In a way, it is very similar to what the hurricane hunters do when they fly out into tropical systems to gather data from the storm and the surrounding environment.

Bottom line: Winter weather will impact the Pacific Northwest and Alaska as areas of low pressures will move into these regions. These areas will see below average temperatures, especially in parts of Alaska. Above average temperatures will be the main story line across the majority of the United States through the end of January 2012. There is a chance that colder weather is on the way for the month of February, but we’ll look into that when the models lock into that time period. With models projecting the majority of the United States becoming warmer than average, we’ll have to keep a close eye on severe weather across the central and southern portions of the United States. If winter decides to show up again, it might produce a strong cold front that could easily provide severe weather in areas that warm into the 70’s. Just a thought, and something to keep an eye on. Until then, enjoy the warmer temperatures unless you live in Alaska or the Pacific Northwest!