For most of the U.S., winter 2011/2012 has been fairly quiet and mild so far. But the models are all hinting at a significant change to come.

Today is January 5, 2012, and we in the U.S. still have not seen any significant snows east of the Mississippi river this winter season. Parts of New Mexico, Texas and Oklahoma panhandles have had their share of snow, but these elements have been fairly foreign for the majority of the United States. After the past few winters, I am sure everyone is relieved that it’s been a fairly quiet and mild winter. If you live in Alaska though, you are probably asking “What warmth?” Alaska was extremely cold and snowy during December 2011. In fact, many places such as Fairbanks, Alaska have seen extremely cold temperatures dropping around -30°F to -40°F. However, the models are all hinting at a significant change to come in the weather pattern. In this post, we’ll take a look at the pattern change and what it might mean for us in the U.S. in the upcoming weeks. 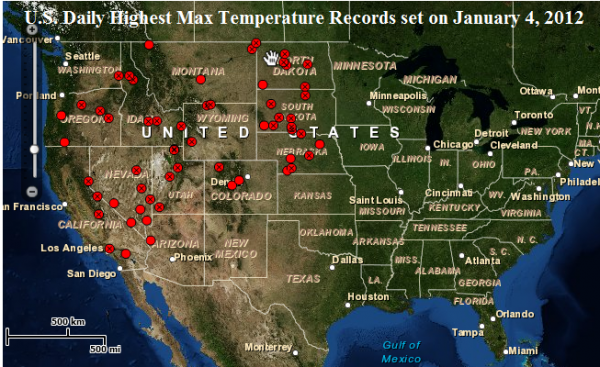 Speaking of a mild winter, did anyone see the temperatures across California and the west coast yesterday? Many record highs were broken. Check them out:

However, the west is not the only place that’s warm and dry. North Dakota broke a lot of record highs on January 4, 2012 too. They will likely break more record highs today as temperatures are expected to climb into the mid to upper 50s.

The average high for Williston, North Dakota for early January is 21°F. Yes, many places in North Dakota are running 25-30 degrees above average!

Enjoy the warmth across the north/central and eastern United States, because if the models are right, it will all end towards the middle of January 2012.

In one of my previous posts, I described how the North Atlantic Oscillation (NAO) and the Arctic Oscillation (AO) affect our winters. These oscillations ultimately have two phases: a negative and positive phase. In simpler terms, when the AO and NAO are negative, colder air from Canada and the Arctic can easily spill south across the eastern United States providing us cold temperatures. If a storm is around when this happens, then a winter storm could easily evolve. For most of December, the AO and NAO were running positive. It was providing very cold temperatures for parts of Alaska, but warmer than average temperatures for the eastern United States. However, the latest outlooks are showing both oscillations to become negative by January 12-15, 2012. If this is true, then it can usher in cold air across the east coast. In this scenario, the west coast would experience ridging or sunny and dry conditions while the east sees a cold and unsettled weather pattern.

The AO is projected to dip negative by the middle of the month of January:

AO is expected to drop in the negative territory soon. Image Credit: NOAA

The NAO is expected to drop negative at least for a short amount of time in the middle of January:

NAO is expected to drop negative by the middle of January 2012. Image Credit: NOAA

*Note: These are all outlooks and forecasts from models. They typically change from day to day.

As of now, the models are hinting at an upper level low forming in Texas and pushing east by early next week. The GFS model 0z output from this morning shows a rather intense upper level low along the Gulf coast. In a scenario such as this, severe weather could be an issue for the Gulf states. The European shows the upper level low pushing further north and less weaker. Regardless of these two paths, it looks rather stormy across the southeast early next week from Monday through Wednesday. If the GFS is correct, then the system will push northeast into the New England states providing a setup similar to a nor’easter. The models are also hinting at much colder air moving in behind this system. If the cold air can phase with the upper level low as it moves towards New England, then we could see quite a storm across the interior portions of the states.

If the GFS model is correct, then it looks to be a story period for the east coast next week. Image Credit: Allan Huffman’s Weather Page

The models differ between the solutions of the upper level low, and I expect the models to show different solutions up until this weekend. The GFS is hinting at very cold air in the long range for a large majority of the nation, especially east of the Mississippi river. I refuse to look at specific temperatures, especially since GFS has not been the most reliable model for this winter. GFS also exaggerates and can show crazy solutions past ten days. For now, we’ll just talk about the possibility of seeing really cold air across the eastern United States with dry, warmer air across the west coast and the Rocky Mountains. Alaska remains very cold in these runs.

Bottom line: A relatively quiet period of weather will continue for the majority of the U.S. this week. However, by early in the week of January 9, 2012, all focus will be on the upper level low that should form along the Gulf of Mexico coast. It could bring decent rains to the U.S. Southeast, and could possibly bring a severe threat depending on the instability and track of the system. This system has the potential to strengthen as it moves northeast, and it could become a strong storm across New England bringing rain across the coastline and perhaps snow in the interior portions of the United States. Afterwards, it looks as if much colder air will push south across the eastern U.S. Regardless of the outcomes, next week looks to be a transition period of unsettled weather for the eastern U.S. The west coast looks to be drier and warmer. Alaska still remains very cold in these outlooks. For now, no worries of wintry precipitation across the deep south, but the pattern looks more favorable for the potential of something forming later in January or February 2012. If we can continue to have cold air pushing in and continue to have upper level lows forming and sweeping across the region, then someone could be extremely lucky (or unlucky) to see the white stuff. For now, nothing is screaming out “winter storm” for the deep south, but you never know what Mother Nature has in store for us.