March 5, 2012
Two storm systems developed between February 28, 2012 and March 3, 2012 that spawned numerous tornadoes that killed at least 52 people. Within the past seven days of today’s date (March 5, 2012), the National Weather Service has issued 413 tornado warnings across the United States, with the majority of these warnings occurring east of the Mississippi River. Also as of March 5, the preliminary count for the tornado outbreak on March 2 is up to 80 with 42 tornadoes confirmed and 39 deaths. The storms pushed through Indiana, Ohio, Kentucky, Tennessee, Alabama, Georgia, and North Carolina. Many strong tornadoes destroyed towns and communities, and some were rated as strong as an EF-4 with winds around 180 miles per hour. The video above was created by Victor Gensini, PhD Student at the University of Georgia. It shows the March 2 outbreak as the storms fired up and the warnings that were issued. This outbreak of deadly tornadoes will likely become the first billion-dollar disaster for the United States in 2012. These storm systems affected the lives of million of people. In this post, we will take a look at a few survivors’ stories, the meteorology behind the storms, and images and videos of this early 2012 tornado outbreak. The series of storms began February 28 and lasted through March 3, 2012. The main system that caused the large tornado outbreak occurred on March 2 as it moved through areas east of the Mississippi River. Let’s take a look at the storm reports starting back on February 28. All images are from the Storm Prediction Center (SPC): 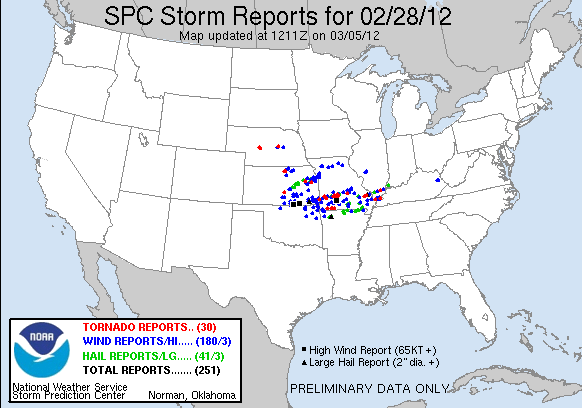 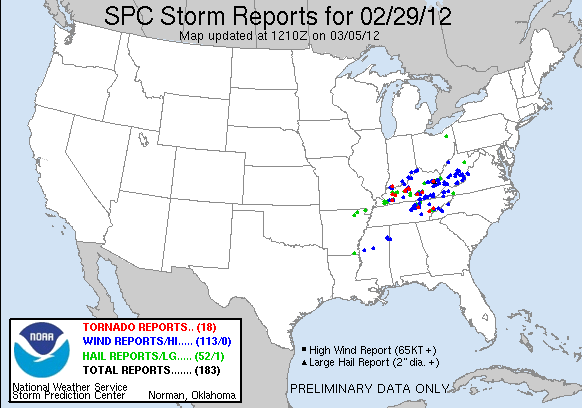 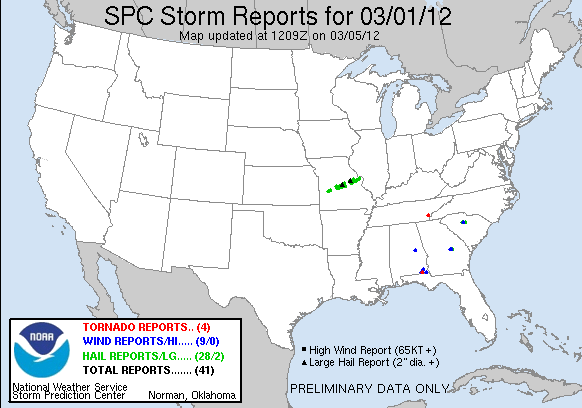 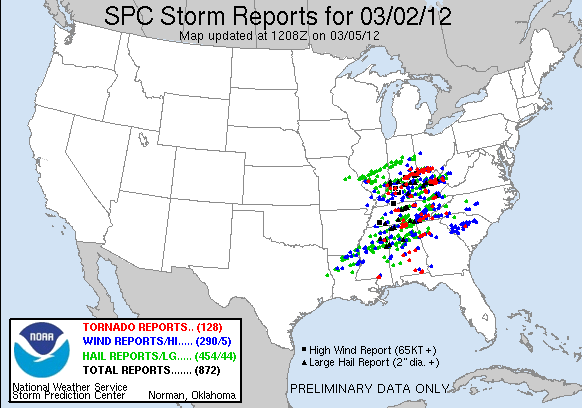 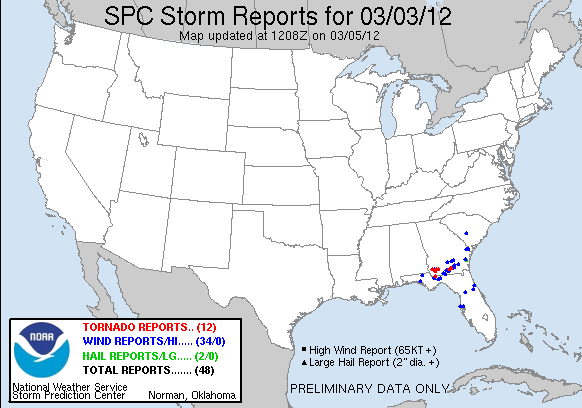 The Leap Day tornado outbreak (February 28 and 29, 2012) produced a confirmation of 36 tornadoes and killed 13 people across the Mid-West in the states of Missouri, Kansas, and Nebraska. Cities of Harveyville, Kansas and Buffalo, Missouri were hit by an EF-2 tornado which killed one person in each town. The hardest hit area was Harrisburg, Illinois as a violent and deadly EF-4 tornado destroyed over 200 homes and 25 businesses as the tornado tracked for nearly 26.5 miles (42.6 kilometers) with a width of 275 yards (251.46 meters). The EF-4 tornado which peaked at 180 mph killed six people and injured over 100 as it tore through parts of Harrisburg, Cottage Grove, and Ridgway. A EF-0 tornado formed across Gandy, Nebraska making it the first tornado to form in the state of Nebraska during the month of February since record keeping began in 1950. The 36 tornadoes that formed during the Leap Day outbreak became the second largest outbreak in the month of February for the United States. The largest outbreak to occur in the month of February was on February 5-6, 2008 when 92 confirmed tornadoes formed.

As mentioned in my previous post, the March 3 and 4 system was going to be larger and stronger as it pushed east. Fortunately, weather models and forecasters were able to warn the public about this threat days before the storms hit. Thirty nine people died from this violent tornado outbreak which stretched from the Tennessee and Ohio River Valley areas. In the state of Kentucky, where a high risk of severe weather was issued the morning of March 2, 19 people died and nearly over 300 people were injured. Indiana was also hit hard with strong tornadoes as the death count total rose to nearly 14 people. Other deaths were reported in Alabama, Ohio, and Georgia. In Georgia, the death was indirect as an 83 year old women tried to hide in a drainage pipe in Alpharetta, Georgia as a tornadic storm pushed into the area.

The storm system quickly gathered strength on the evening of March 1 and push northeastward towards Missouri. The area of low pressure strengthened and created a very unstable atmosphere to the southeast side of the low. Behind the system, very cold air was pushing southward towards the Mississippi River with temperatures in the upper 30s (image above). A strong jet stream brought winds in excess of over 100 mph which created a lot of shear and spin in the atmosphere. The Leap Day system that produced the tornadoes on February 29 stalled across the deep south and eventually became a warm front. This front reinforced the unstable air mass and even developed tornadoes in the morning hours of March 2, 2012. The first of many tornadoes developed near Madison and Limestone counties in north Alabama. An EF-3 tornado formed with a path length of 34.4 miles with a width of 250 yards. This tornado had peak winds of 140 mph and caused significant damage in these areas. Here’s a look of the storms that fired up on radar and some of the damage in these areas.

As the warm front pushed north, it triggered numerous tornado warnings across Tennessee. This was only part one of two of the deadly tornado outbreak of the day. The warm front was just the beginning. The main storm was just building strength to the west, and the influence of a deepening area of low pressure and an increase in instability made part two even worse as Indiana, Kentucky, and Ohio saw violent, long-track tornadoes. As warmer air pushed northward and the low pressure system strengthening, it only made sense that Kentucky and southern Indiana and Ohio would be the battleground of deadly tornadoes. The storms were so strong that letters, mail, and other debris were lifted from West Liberty, Kentucky tornado and were relocated to Charleston, West Virginia.

One of the hardest hit areas on March 2, 2012 was Henryville, Indiana. A series of supercell thunderstorms developed and pushed to the northeast at very fast rates. A line of storms began to train, or move over the same areas. Training can sometimes lead to flooding in many areas, however, for this instance, the training brought a series of tornadoes moving into the same areas. Some areas had roof damage from the first storm as a tornado came through and then hail damage to their house as the second storm produced baseball sized hail. (image below) The first storm produced an EF-4 tornado which caused significant damage to the high school in Henryville. Storm surveys will continue to be analyzed because the National Weather Service must determine the two separate tracks and determine which track was associated with that particular tornado. In a situation such as this, surveying damage is very tricky.

Unfortunately, very sad stories have come from these deadly storms. The most popular story going around is about the 14-month old toddler, Angel Babcock, who was found in a field 150 yards away from her house after a tornado destroyed her family’s home. Her parents, brother, and sister did not survive this storm, but Angel was found and sent immediately to the hospital. She was diagnosed to be in critical condition, and on March 4, 2012, Angel Babcock was removed from life support as her injuries were too severe. In Charlotte, North Carolina, a seven-year-old boy named Jamal Stevens was picked up from his home by a tornado and thrown 350 feet away onto Interstate 485. Fortunately, Jamal and his family survived this tornado and only encountered a couple of injuries.

How significant was the February 28-March 3, 2012 tornado event?

It is rare and unusual to see severe weather so far north in early March. Typically, severe weather begins in Dixie Alley across the Deep South during the months of March and April. By late April and into the months of May, severe weather is further west and north across Missouri, Indiana, Illinois, Kansas, Oklahoma, and Texas. Instability, which is practically fuel for thunderstorms, is typically hard to get during the winter months. We typically see strong, dynamic systems with plenty of wind shear, but very little instability as temperatures are typically cool. Since most of the United States has had a mild winter, the Gulf of Mexico is actually warmer than average for this time of year. The warmer conditions added gasoline to the fire, which is one of the many reasons these late February and early March storms were so damaging. These series of storms will likely break or tie records in regards to the number of tornadoes and activity for this early part of the year. It is still uncertain as to whether or not 2012 will bring another active, damaging severe weather season. It is hard to imagine topping 2011 in regards to severe weather outbreaks and tornado activity.

As the cities are trying to start over and rebuild their damaged communities, Mother Nature struck another quick blow yesterday and early today. On March 4, 2012 and early March 5, 2012, a small Alberta clipper system behind the cold front that triggered these tornadoes pushed through parts of Indiana, Ohio, and Kentucky and provided snow across these areas. Alberta clippers are fast moving systems that act as a little disturbance that can provide small amounts of snow in the winter time. Many areas saw around one to three inches of snow on top of tornado damage with some areas receiving nearly five inches. The snow on top of the tornado damage only causes more problems as many people are trying to recover items that are now covered in fresh, wet snow. Also, walking in damaged areas is extremely dangerous as nails and other sharp objects are hidden underneath the white snow.

Bottom line: A major tornado outbreak associated with two storm systems swept through parts of Missouri, Kansas, Indiana, Ohio, Kentucky, Tennessee, Alabama, Georgia, Florida, West Virginia and North Carolina from February 28, 2012 through March 3, 2012. If you combined the two outbreaks, at least 52 people died from these events. Thirty nine died from the March 2, 2012 outbreak alone. Hundreds of homes were damaged or destroyed and thousands of people were without power. This outbreak will likely, in my opinion, become the first billion-dollar disaster for the United States in 2012. As of now, no one can say if spring 2012 will provide the United States with an active tornado season. Prayers go out to all of the families and communities that experienced the wrath of Mother Nature last week.

Thank you! Your submission has been received!
Oops! Something went wrong while submitting the form.
END_OF_DOCUMENT_TOKEN_TO_BE_REPLACED