Slovenian folklore speaks of baby dragons flushed from parents’ subterranean lairs. Today, we know these rare creatures as the olm, and one of them has laid eggs. 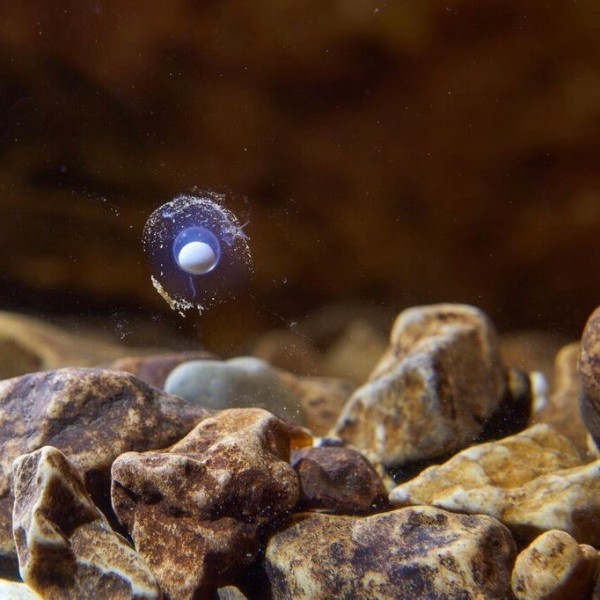 A tour guide first noticed an egg attached to the wall of an aquarium holding captive olm. Image via Postojna Cave Park in Slovenia.

In the subterranean caves of central and southeastern Europe dwells a rare and unusual aquatic salamander species known as the olm. Its females lay their eggs just once every six or seven years. On January 30, 2016, staff at the Postojna Cave Park in Slovenia were thrilled to learn that a female olm in their captive population had produced an egg.

A tour guide first noticed an egg attached to the wall of the olm exhibit aquarium. Not far from the egg, a pregnant olm stood guard, attacking others of her kind that ventured too close.

To safeguard the mother and egg, aquarium biologists relocated the other olm in the aquarium. Over the next six days, two more eggs were laid. 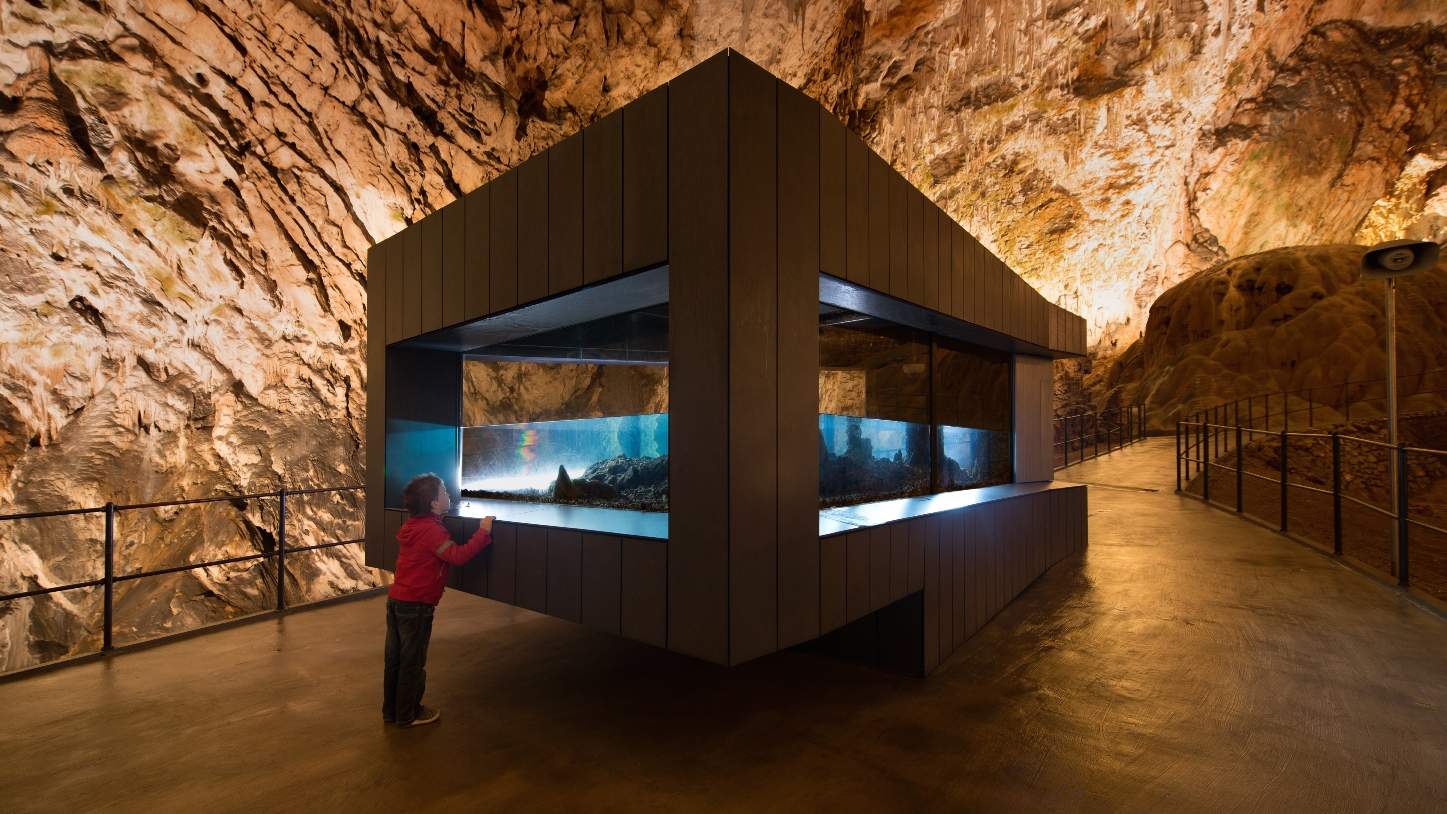 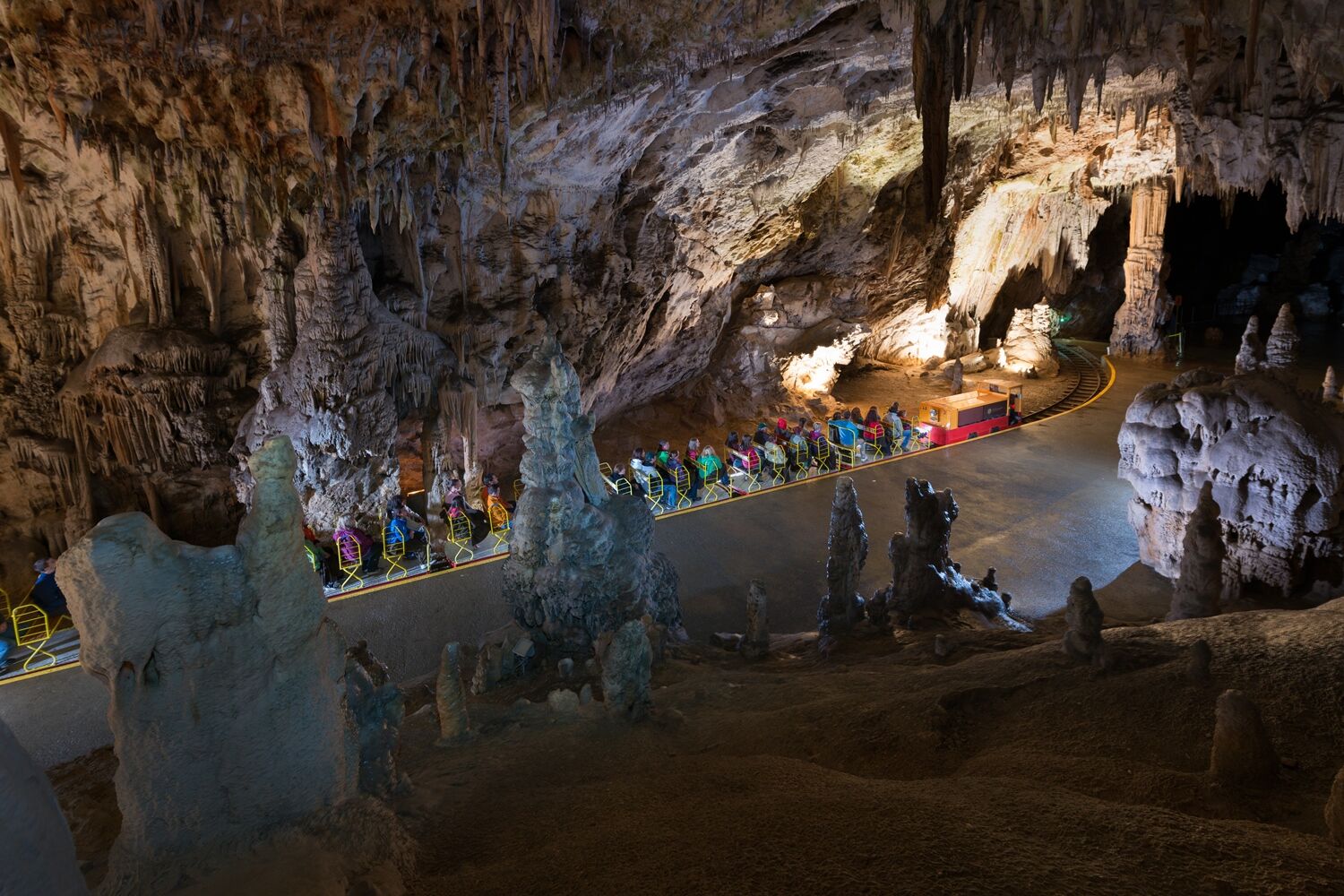 According to Slovenian folklore, heavy rains would flush out baby dragons from their parents’ subterranean lairs. With its long slender body, short flat tail, four thin limbs, and an almost transparent pinkish or yellowish-white thin skin, the olm could certainly be imagined as a new-born dragon.

These creatures range in length from 8 to 12 inches (20-30 cm), sometimes reaching as long as 16 inches (40 cm). The Olm’s pear-shaped head tapers to a short flattened snout and a small mouth with tiny teeth. Gills that protrude from either side of its head enable it to breathe in water, though it sometimes uses its underdeveloped lungs to take in air above the water surface. 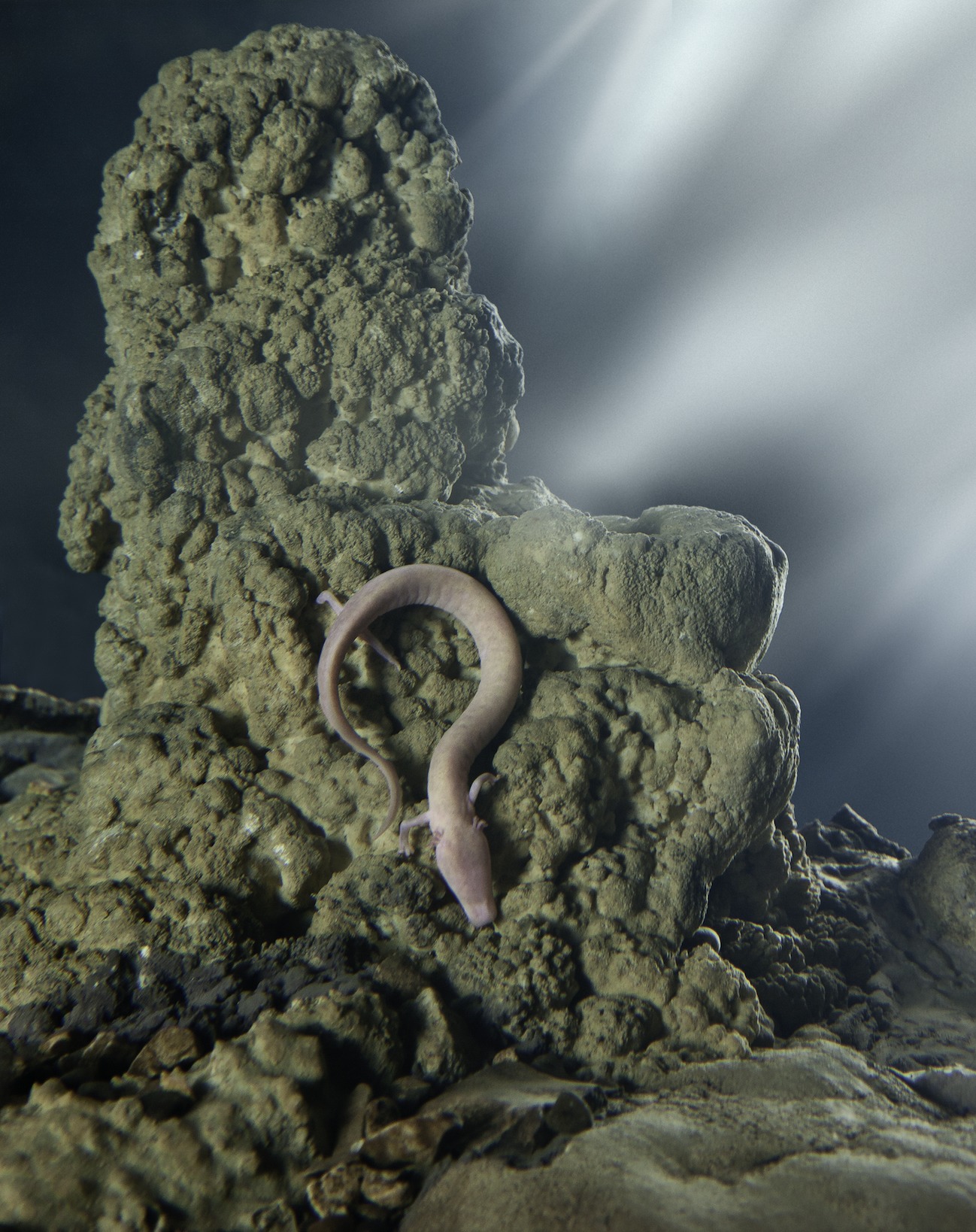 Olm (with the scientific name Proteus anguinus) were thought to be baby dragons, according to Slovenia mythology. Image via Postojna Cave Park.

Olm have been referred to as human fish because their coloring resembles the hue of light-skinned people. Scientists, however, prefer to use its taxonomic name Proteus anguinus.

Proteus is the only vertebrate in Europe adapted to caves. They live below ground in freshwater cave habitats in karst formations, areas of limestone that have been sculpted by water, and have been found in about 200 locations ranging from the edge of eastern Italy, near Trieste, through southern Slovenia, southwestern Croatia, and southwestern Bosnia and Herzegovina.

In the Postojna Cave system itself, at least 4,000 olm have been documented in the wild. 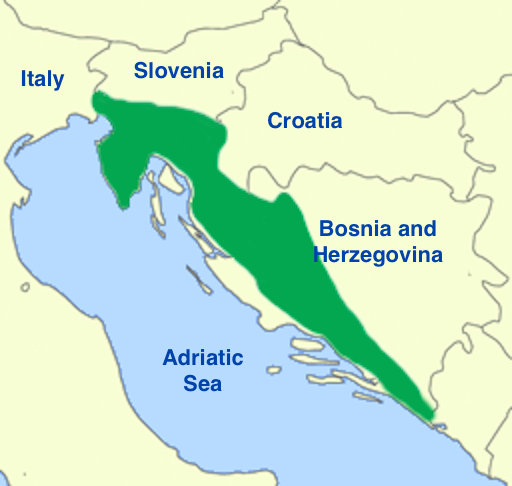 Distribution of cave salamander, Proteus anguinus. Image via Yerpo via Wikimedia Commons, based on data from edgeofexistence.org.

Moving through the water with an eel-like undulating motion, olm hunt for small crustaceans, snails and insects. They’re well-adapted for dark cold cave waters with scarce food, low oxygen levels and cold temperatures. When food is abundant, they are able to gorge, storing lipid and glycogen reserves in the liver for later use.

When conditions become stressful, olm become inactive and reduce their metabolic rate. In extreme situations, they can survive by absorbing some of their own tissues. In laboratory experiments, olm have been able to stay alive without food for up to 10 years.

They may also have the longest life-span of any salamander species. Studies of captive olm populations indicate they may have an average lifespan of about 68 years, and scientists think they could live for as long as 100 years. 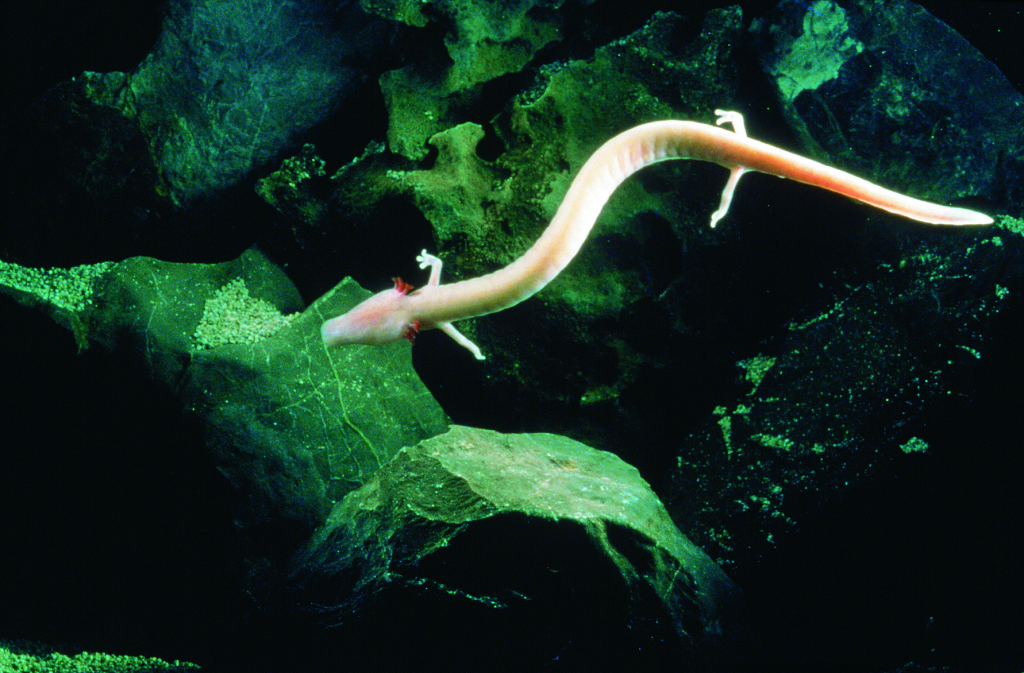 Olm, also known as “human fish,” are the only species of cave-dwelling vertebrae in Europe. Image via Postojna Cave Park.

Check out the undulating motion of a swimming olm, in the video below:

Having evolved in darkness, these cave dwellers have also made other extraordinary adaptations. With no need for vision, their eyes have sunk below the skin. Other senses, however, have become more powerful. They have a very acute sense of smell and can pick up faint sounds in water. They’re able to detect weak electric fields, and some laboratory experiments indicate they are able to orient to the earth’s magnetic field.

Olm do not undergo metamorphosis like most amphibians such as frogs that begin their lives as tadpoles. They retain larval features for life, such as a slender body and gills. Even though their thin translucent pale skin may indicate albinism, a condition where an organism does not have pigmentation, olm are able to produce melatonin that turn them darker in prolonged exposure to light.

Dr. Liljana Bizjak Mali, a scientist at the Biotechnical Faculty at the University of Ljubljana said through her press office:

Because they live most of their lives hidden away in subterranean aquatic habitats, we know very little about the reproductive biology of Proteus, but we do know that they show some unusual characteristics here.

Proteus salamanders become sexually mature as adult ‘larvae’ after 14 years at 11-12 degrees Celsius (about 52-53 degrees Fahrenheit). Males mature earlier than females at 11 years. It never really ‘grows up’ fully, and instead lives its life as an adult with larval characteristics, including external gills. The reproductive period is very extended and lasts at least 30 years and the reproductive cycle is extremely long, with females laying eggs at intervals of 6 -12.5 years.

Females lay eggs at any time of the year but they have a preference for winter time, with maximum egg laying from October to March. Like most other salamanders, fertilization is internal via packets of sperm called spermatophores deposited by males and picked up by females using their sex organs.

Proteus lays eggs, and these white, jelly-coated pearl-like eggs are then fertilized one by one as the female attaches them to the underwater rocks deep in the cave. Some have believed that Proteus sometimes deliver their young alive (viviparity) like mammals, but we now know this is not true. 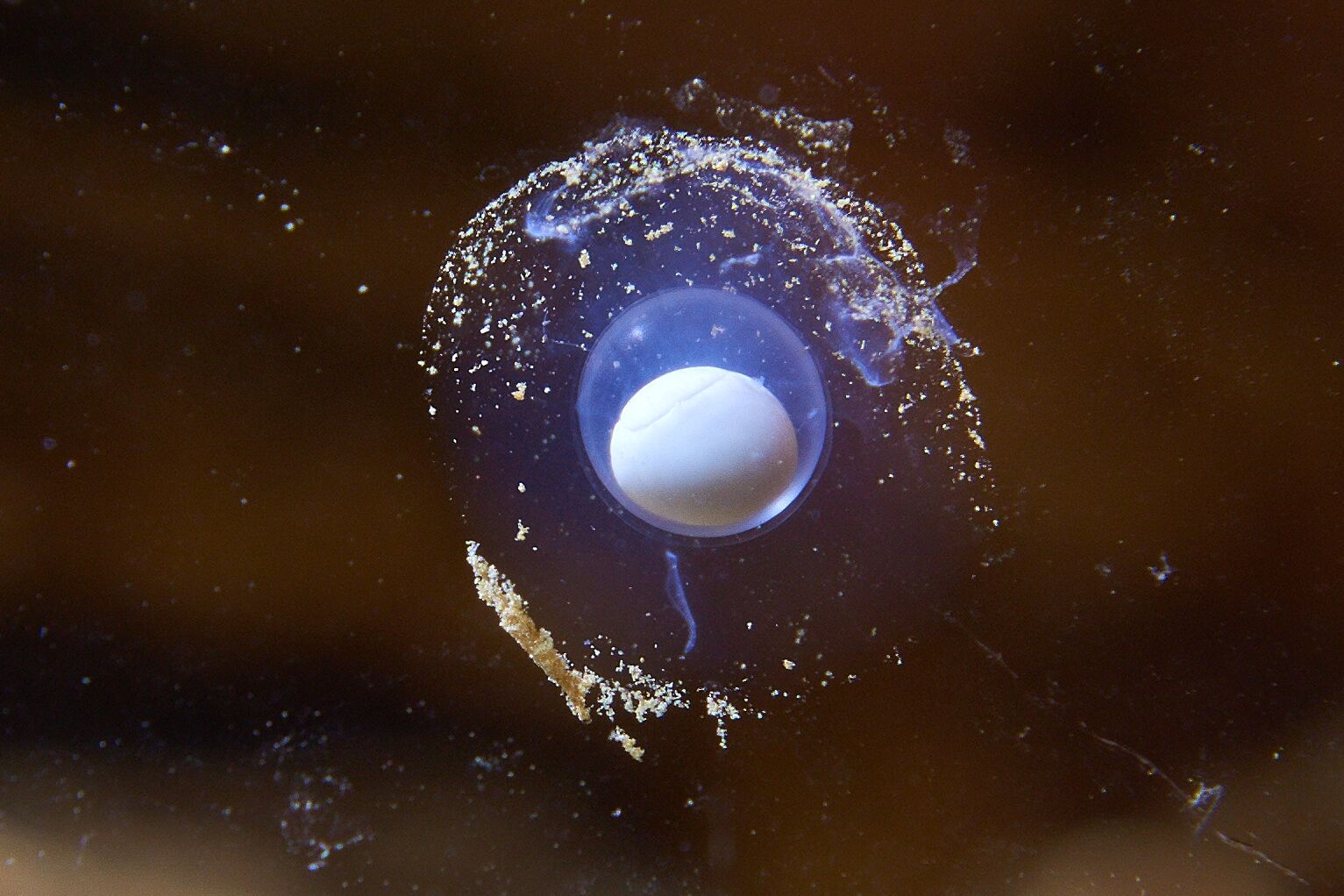 A close up of the first olm egg. Image via Postojna Cave Park.

There are many threats to the survival of olm. Disturbances to subterranean water systems, such as hydroelectric dams and water extracted for human use, can severely affect their fragile habitat. Water percolates quickly through porous karst with little filtration, making these underground water habitats especially vulnerable to pollution from waste disposal and hazardous chemical spills, as well as fertilizer and pesticides. In Slovenia, where these cave-dwelling salamanders are regarded as a national treasure and even featured in one of the country’s coins, olm have been a protected species since 1982.

Bottom line: Biologists at the Postojna cave in Slovenia are monitoring a female in their captive olm population that’s producing eggs. This rare and unusual cave salamander species, endemic to central and southeastern Europe, only bear eggs once every six or seven years. This event is a rare opportunity to study the behavior of an egg-laying female olm and monitor the development of larvae.

A female olm laid eggs at the Postojna Cave in August 2013, but her eggs did not hatch.