The vast Altiplano plateau in the South American Andes Mountains formed not gradually, but through rapid growth spurts, a new geological study suggests.

The vast Altiplano plateau in the Andes Mountains – average elevation 3.75 kilometers (12,300 feet) – is the world’s second-largest area of high mountain plateau, after Tibet. Writing at NationalGeographic.com, Alma Guillermoprieto described it as otherworldly, a place of superlatives and said it’s …

… a landscape of ice and fire, wind and salt that stretches from northern Argentina to the harsh flatlands of Peru.

Now scientists have gained some insight into how this vast mountain plateau formed. They believe it arose not gradually, but through rapid growth spurts. The research outlining these ideas was published in the journal Earth and Planetary Science Letters on May 1, 2014.

The high and dry Altiplano, this part in Bolvia, via Flickr user Phil Whitehouse. Phil said that at this location, at night, the temperature would drop to -20 degrees C. (-4 F).

The location of the Altiplano in S. America, via Wikimedia Commons.

Scientists took samples of carbonate minerals from low and high elevations of the Altiplano plateau to study its surface uplift history. They the examined carbon and oxygen isotopes present in the samples; isotopes are atoms with an ordinary number of protons, but varying numbers of neutrons, making them different forms of a single element.

By examining isotopes from low and high elevations in the Altiplano, scientists were able to reconstruct the temperatures at which the minerals were formed and buried in the mountain range. They then used this data to pinpoint the time when the surface of the plateau was thrust into higher altitudes. Such altitudes are associated with cooler temperatures that differ greatly from the low elevation sites.

Together, these data suggest that the central Andes plateau was formed through a series of rapid growth spurts.

The Arbol de Piedra in the Bolivian Altiplano is volcanic rock, sculpted by wind. Photo via Flickr user Pedro Szekely. 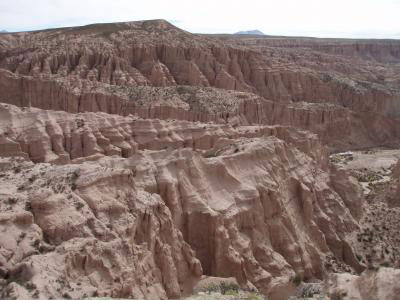 Sedimentary deposits in the Altiplano plateau, where the samples for the recent study were collected. Image via Carmala Garzione/University of Rochester.

Carmala Garzione of the Department of Earth and Environmental Sciences at the University of Rochester is lead author of the new study. She commented on the findings in a press release:

This study provides increasing evidence that the plateau formed through periodic rapid pulses, not through a continuous, gradual uplift of the surface, as was traditionally thought. In geologic terms, rapid means rising one kilometer or more over several millions of years, which is very impressive.

The Andes Mountain Range was built through the forces of plate tectonics whereby the Nazca and Antarctic oceanic plates slipped underneath the South American continental plate and thickened Earth’s crust. In the region of the Altiplano plateau, and possibly other areas of the Andes as well, parts of the dense lower crust and upper mantle might have periodically detached, which would have allowed the lighter upper crust to rise rapidly, the scientists say.

These periods of relatively rapid surface uplift were likely separated by very long periods of fairly small elevation changes. Hence the growth spurts in the Altiplano.

The scientists are hoping to apply their techniques to other high-elevation mountain ranges to see if they can detect similar growth processes.

The Altiplano is the second-largest area of high mountain plateau in the world (after Tibet). Photo via Flickr user Lenta Moebiusa

Bottom line: A new geological study published on May 1, 2014 in Earth and Planetary Science Letters suggests that the vast Altiplano plateau in the Andes Mountains formed through rapid growth spurts several million years ago.