The Paracas immediately preceded another culture called the Nazca, which is famous for making massive line drawings in the Peruvian desert. 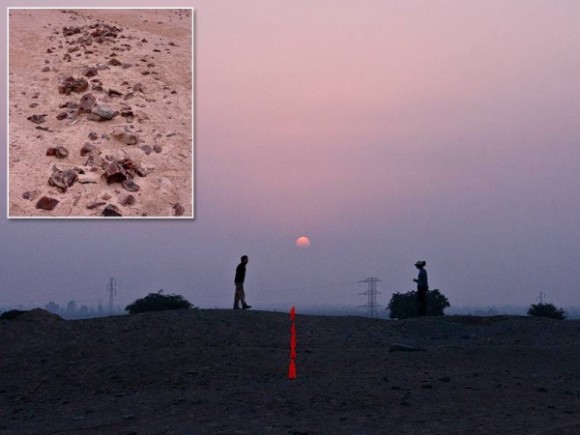 A winter solstice sunset on the largest Paracas mound in Peru. Meter-wide geoglyphs (inset) guided travelers to such places to celebrate. Photo via Sciencemag.org and Charles Stanish. 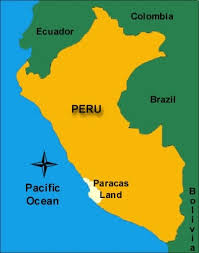 The image above shows the sun setting at the winter solstice on a large “mound” in the Chincha Valley in Peru. The mounds were built by the Paracas people, who lived in what is now southern Peru from 800 to 100 B.C.E. Meter-wide geoglyphs (inset) guided travelers to these mounds on the desert, which appear to be tied to solstice sunsets, apparently for celebrations. That’s according to Charles Stanish, an archaeologist at the University of California, Los Angeles, who led a new study published yesterday (May 5, 2014) in the Proceedings of the National Academy of Sciences.

The Paracas immediately preceded another culture called the Nazca, which is famous for making massive line drawings in the Peruvian desert, made out of earth and stone. The Nazca Lines include enormous works of art depicting everything from birds to monkeys.

Archaeologists call these lines geoglyphs, whether they are meant to be artistic like the famous Nazca Lines or serve a practical purpose, like the lines in the desert drawn by the Paracas people.

Researchers have found that the ancient geoglyphs, or lines, were probably ancient signposts for the Paracas culture more than 2000 years ago. They’re thought to have guided people across the desert to gathering places for the winter solstice. According to a May 5 article in Sciencemag.org:

… the researchers played a 30-square-kilometer game of connect the dots. They used GPS technology to plot the desert’s settlements, mounds, and 71 geoglyphs for the first time. What they saw was unmistakable. Certain groups of geoglyphs clearly led directly to particular mounds or settlements, suggesting that they served as paths for Paracas people seeking to trade goods or gather for other activities.

It appears that the three large mounds had a ceremonial purpose, because each was connected to separate pairs of geoglyphs that point directly to the spot where the sun sets on the winter solstice in June. There’s no evidence that people lived around the mounds, so Stanish suspects the Paracas used them as gathering places for yearly festivities tied specifically to the solstice. He told Sciencemag.org:

When you stand behind the mounds and you’re facing the sunset—and we were there for the solstice—the sun sets right on the mound. And if you’re a human being standing there, the sun melts right on your head. It’s pretty impressive.

Bottom lime: The ancient Paracas culture in Peru – which lived from 800 to 100 B.C.E. – apparently created long lines across the desert to guide people to meeting places, sometimes for winter solstice celebrations, according to new research led by Charles Stanish of UCLA. This early Peruvian culture directly preceded the Nazca culture in Peru, makers of the famous Nazca Lines.

Read more at Sciencemag.org, the website of the American Association for the Advancement of Science