October ends streak of above average temperatures for U.S.

Even though October 2012 was cooler than average, the entire year will likely be the warmest ever recorded. In fact, 2012 will likely beat 1998 for the warmest year ever recorded in the country. According to Jeff Masters of Weather Underground, even if 2012 ranks historically in the coldest one-third of November – Decembers ever seen, 2012 will still beat out 1998 for warmest year. If you can remember, 2011-2012 winter was unusually warm with very little ice/snow across the country. July 2012 ended up being the warmest month ever recorded in the contiguous United States. When you add these totals up, it will be very difficult to not break the 1998 record for warmest year.

Precipitation was generally above average across the United States in October 2012. The U.S. monthly rainfall total of 5.49 inches (139.45 mm) was 143 percent of normal. The areas with the most rain occurred late in October when Hurricane Sandy pushed into the Mid-Atlantic and Northeast with strong winds, storm surge, snows, and heavy rain. In fact, here are a few areas that experienced record amounts of rain in October 2012:

If you include snowfall totals, Sandy also produced three feet of snow in the higher elevations of West Virginia, with many areas experiencing over ten inches. In fact, the snowiest October on record (since 1948) occurred in Charlestown, West Virginia, with 10.1 inches (256.54 mm) 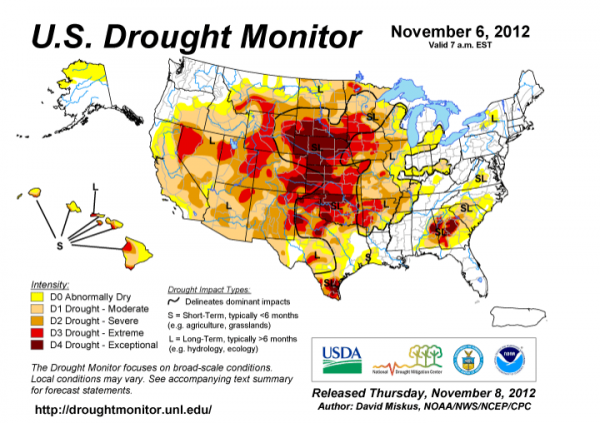 The drought continues to be an issue across the United States. As of the November 6, 2012 drought update, 59.48% of the country is experiencing drought. The areas that continue to remain dry include the Central Plains, the Rocky Mountains, the Southeast (particularly Georgia), and the Southwest United States. Approximately 19% of the country is experiencing extreme to exceptional drought. Back on August 1, 2012, over 62% of the United States was experiencing drought (D1-D4). We have only seen a very small percentage of drought improvement over the past three months.

Bottom line: October 2012 was ranked as the 44th coldest and was roughly 0.3 degrees Fahrenheit below average for the contiguous United States. Although October was cooler than average, 2012 will likely be the warmest year ever recorded in the United States thanks to the absence of last winter and unusually hot temperatures in July 2012. The biggest weather storyline for the month of October 2012 was when Hurricane Sandy pushed into the Mid-Atlantic and Northeast and produced extensive damage along the shores, blizzard conditions in West Virginia, and strong winds that took down trees and power lines. Even if November and December end up being cooler than average, 2012 will still likely beat 1998 for the warmest year in the United States.

Thank you! Your submission has been received!
Oops! Something went wrong while submitting the form.
END_OF_DOCUMENT_TOKEN_TO_BE_REPLACED