A young volcanic island in the western Pacific Ocean has been going through a vigorous growth spurt since mid-June 2020. 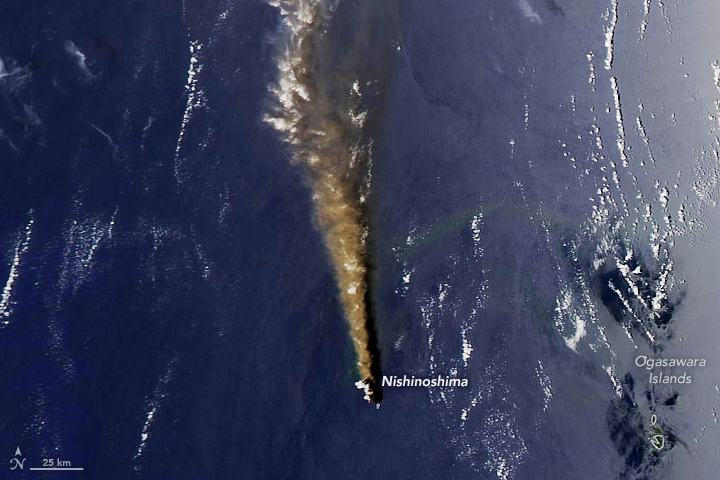 The Moderate Resolution Imaging Spectroradiometer (MODIS) on NASA’s Aqua satellite acquired the natural-color image above on July 6, 2020, when the volcanic plume stretched hundreds of kilometers to the north and rose several thousand meters into the sky. Image via NASA.

A young volcanic island has been growing in the western Pacific Ocean since 2013. Since mid-June 2020, it has been going through a vigorous growth spurt.

The images on this page show some of the latest eruptive activity at Nishinoshima, a volcanic island about 600 miles (1,000 km) south of Tokyo, Japan.

(You can see the evolution of the island eruption by visiting the NASA Earth Observatory Nishinoshima event page.) 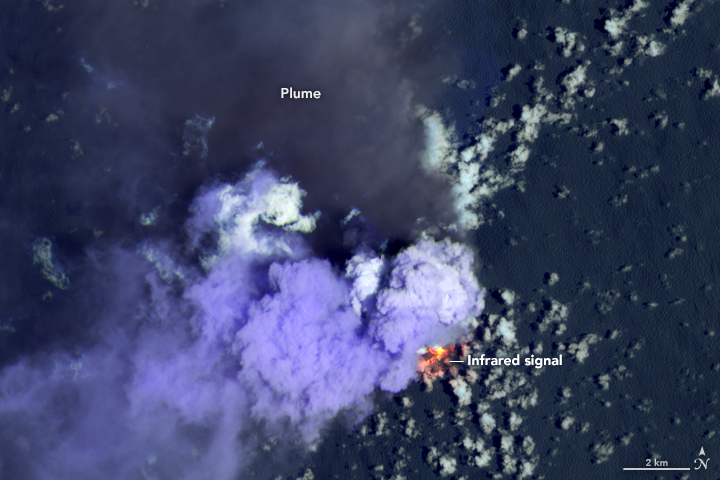 This false-color image, acquired by Landsat 8 on July 4, 2020, combines shortwave infrared and visible wavelengths (bands 7-6-4). It reveals the heat signature of erupting lava and the relative coolness of the dark ash plume (blowing north). The bright purple clouds close to the island could be steam from the volcano or from lava vaporizing seawater. Image via NASA.

According to reports and aerial photographs from the Japan Coast Guard, activity at the volcano appeared to pick up in late May, spewing ash and lava with more vigor than in previous months. On July 3, the volcanic plume rose as high as 15,400 feet (4,700 meters) above sea level; the next day, ash was detected as high as 27,200 feet (8,300 meters), the highest altitude a plume has risen since the volcano poked above the water line in 2013. Volcanic bombs were ejected as far as 1.6 miles (2.5 km) from Nishinoshima that day.

According to news reports citing the Geospatial Information Authority of Japan, the southern shore of the island grew by at least 150 meters (490 feet) between June 19 and July 3. The European Space Agency’s TROPOMI satellite also observed a sizable plume of sulfur dioxide from the eruption.

Nishinoshima is part of the Ogasawara Islands, in the Volcano Islands arc. It is located at 27° 14’ north latitude and 140° 52’ east longitude, about 80 miles (130 km) from the nearest inhabited island. 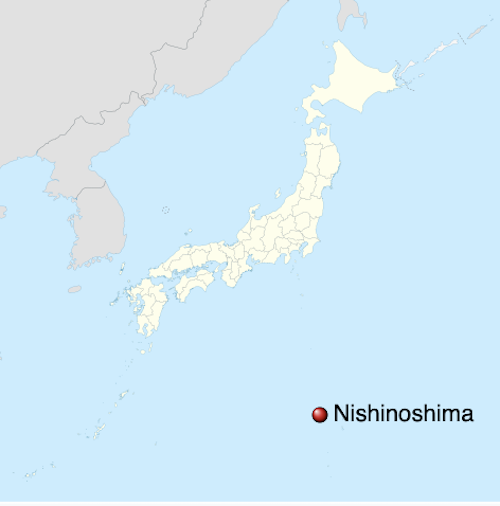 Bottom line: The Nishinoshima volcanic island in the western Pacific Ocean has been going through a vigorous growth spurt since mid-June 2020.