Welcome to the Meghalayan age

Scientists have assigned a new name to the era we’re living in. They’re calling it the Meghalayan – because key data for the timing of the new age were derived from a stalagmite growing in a cave in the Indian state of Meghalaya. 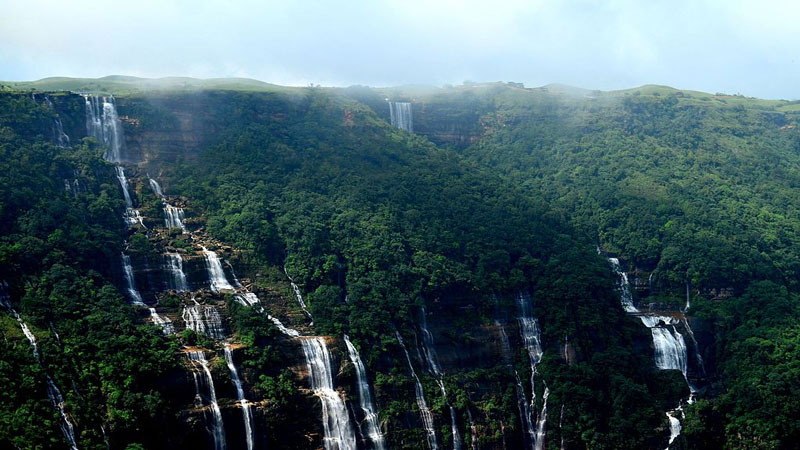 Seven Sisters Waterfalls in Megahalaya, India, the state that is the namesake of the new geological age. Image Credit: Rohan Mahanta via Wikimedia Commons.

Earth’s geological history over the past 4.5 billion years is divided up into various units including eons, eras, periods, epochs, and ages. Scientists have just assigned three new ages to the Holocene, which is the current epoch in which we live. They’re calling this most recent age the Meghalayan, which began 4,200 years ago during a worldwide megadrought.

The Holocene commenced 11,700 years ago after the end of the last ice age. Since that time, Earth’s climate has continued to fluctuate. First, there was a warm period that lasted from 11,700 to about 8,300 years ago. Scientists have named this age the Greenlandian age. Next, the Earth went through a gradual cooling period from about 8,300 to 4,200 years ago, and this is now known as the Northgrippian age. The last age of the Holocene began 4,200 years ago during a worldwide megadrought, and it has been named the Meghalayan age.

The megadrought at the beginning of the Meghalayan was a very disruptive climatic event that lasted for around 200 years. According to the International Commission on Stratigraphy (ICS), which is the scientific body responsible for proposing new names for Earth’s geological history, the drought had severe impacts on many agricultural-based societies. This in turn led to extensive human migration in areas such as Egypt, Mesopotamia, the Indus River Valley, and the Yangtze River Valley.

Geological evidence of the megadrought at the onset of the Meghalayan can be found on all seven continents. Key data for the timing of the new age were derived from a stalagmite growing in Mawmluh Cave in the state of Meghalaya, northern India. Subsequently, the new age was named the Meghalayan after the site of origin of the stalagmite. 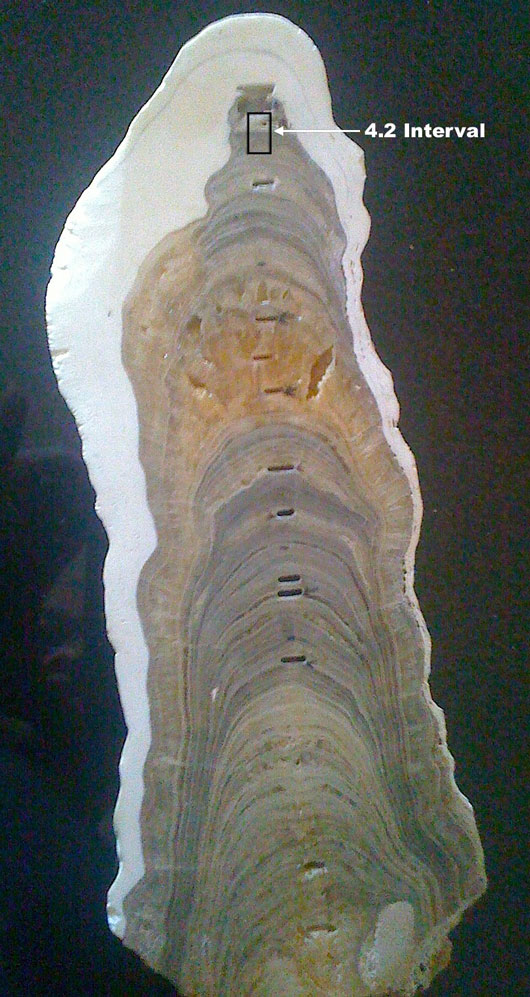 Cross section of a stalagmite from India showing the start of the new Meghalayan age. Image courtesy of the International Commission on Stratigraphy.

Any new names proposed by ICS have to be approved by the parent organization of ICS, the International Union of Geological Sciences (IUGS). The new names for the three ages of the Holocene were ratified by IUGS on June 14, 2018, and an updated chart (pdf) for Earth’s geological history was released.

Some people may have heard the term Anthropocene thrown around in science circles. This name has been proposed as a new epoch for Earth’s geological history to mark the substantial influence of humans on geology and climate, but it has not been formally approved by any scientific body.

Bottom line: The Holocene epoch, in which we currently live, has been divided into three new geological ages—the Greenlandian, Northgrippian, and Meghalayan. The most recent age, the Meghalayan, began 4,200 years ago during a worldwide megadrought.