Days of darkness this December? Of course not.

Heard the rumor that “NASA says” Earth will experience several days of total darkness in December 2014? Not true, of course.

Question: Will Earth experience six (or three) days of darkness in December, 2014?

We at EarthSky have received many questions already about the so-called days of darkness supposedly announced by NASA and supposedly coming up in December, 2014. This rumor has spread like wildfire, as did the same rumor in 2011, which called for days of darkness caused by the erstwhile Comet Elenin. 2014’s version of the rumor apparently first began with this article from Hutzlers.com. The article states:

NASA has confirmed that the Earth will experience 6 days of almost complete darkness and will happen from the dates Tuesday the 16 – Monday the 22 in December. The world will remain, during these three days, without sunlight due to a solar storm, which will cause dust and space debris to become plentiful and thus, block 90% sunlight.

Oh, brother. Just reading that quote gives us a combination of heartburn plus giggles. Why? Let’s ignore for the moment that space scientists can’t yet predict when a solar storm will occur, although, in the hours leading up to one, they sometimes suggest a probability that one might occur. That aside, there’s never been an event where a solar storm created enough “dust and debris,” whatever that means, to darken Earth … at least not in living memory. Could such a thing even be predicted, sort of like Superman’s dad Jor-El predicted the explosion of planet Krypton (which also had never happened before)? Let’s remember for a moment that Superman was fiction, but, even given that, many other imaginary scientists on that imaginary planet Krypton were arguing that the explosion wasn’t really imminent. Likewise, here on our real Earth, a prediction of days of darkness caused by solar storms would be such outlandish science that scientists would argue about it up until the time it happened … or didn’t happen. NASA wouldn’t just suddenly “predict it,” in other words.

Before we go on, the inquiring reader may want to read what Hutzlers.com says about itself:

Huzlers.com is a combination of real shocking news and satirical entertainment to keep its visitors in a state of disbelief.

Well, they got that part right. 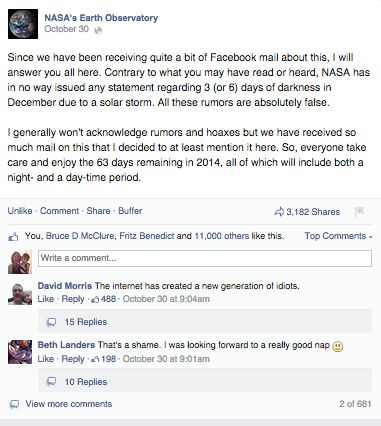 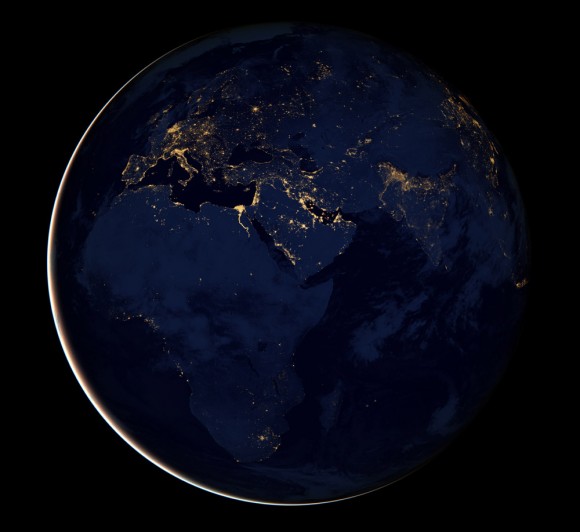 This beautiful image of the night side of Earth is a composite of data gathered by the Suomi NPP satellite in April and October 2012. Is Earth totally dark when it’s night for you? No. Earth is always half illuminated by sunlight. Notice the crescent of illumination on one edge in this photo. If you were on the other side of Earth when the images used in this composite were acquired, you’d see Earth shining brightly in reflected sunlight, aka daylight. Image via NASA/NOAA.

Is all of this a replay of the December, 2012 winter solstice hysteria?

We don’t know what it is about the December solstice, the Northern Hemisphere’s winter solstice, but it seems to inspire all kinds of pseudo-scientific claims and apocalyptic fantasies. The days-of-darkness theme appears to be a revival of sorts of the bogus galactic alignment prophesy, which did not take place – as expected – on the 2012 winter solstice.

The Earth will shift from the current third dimension to zero dimension, then shift to the fourth dimension. During this transition, the entire Universe will face a big change, and we will see a entire brand new world. The 3 days blackout is predicted to happen on Dec 23, 24, 25…. 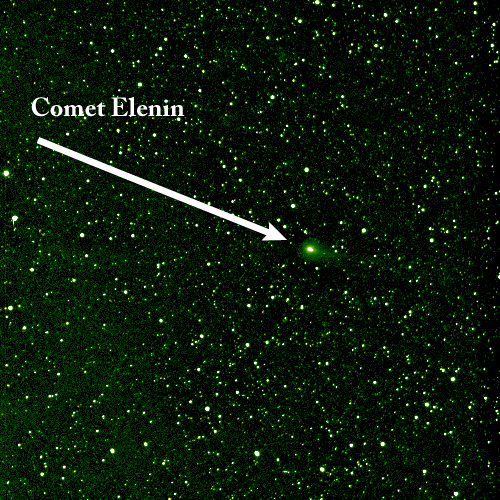 As Comet Elenin passed near the sun in 2011, it was supposed to block the sun and cause three days of darkness. Of course, it didn’t. That would have been far more difficult than, say, a mosquito blocking your car headlight. Image via NASA

Remember Nibiru, the fictitious planet, which was predicted to bombard the inner solar system and collide with our planet Earth in 2012?

When acute telescopic observers wondered why this huge planet wasn’t visible in the night sky by 2010, Nibiru proponents answered the challenge by claiming the discovery of Comet Elenin in December 2010 provided proof of Nibiru’s existence.

Moreover, prognosticators went on to say that Comet Elenin itself was to bring three days of darkness – which, of course, never came to pass. Meanwhile, Comet Elenin eventually disintegrated.

So will you experience three to six days of darkness in December, 2014? No … unless you live north of the Arctic Circle, which has continuous darkness in winter every December.

Bottom line: NASA did not predict – and December, 2014 will not have – three to six days of darkness.

Comet Elenin: Still not a spaceship or doomsday comet