Many of Earth’s biggest aquifers overstressed

People around the world rely on groundwater for drinking and crop irrigation. But a new satellite data study says that many of our biggest aquifers are overstressed. 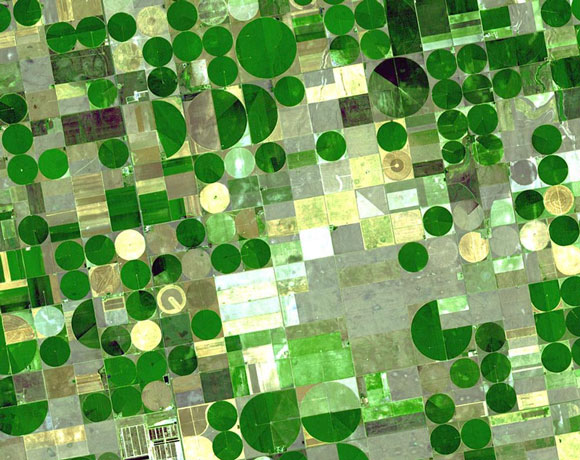 Approximately 2 billion people rely on groundwater for their primary water source, and groundwater is used to irrigate many of the crops that people depend on for food. Needless to say, groundwater is a very valuable resource. As with any valuable resource, it is a good idea to keep track of it, but that can be difficult to do with groundwater because it resides underneath the ground. Now, using new satellite technology, scientists have mapped trends of groundwater depletion in 37 of the world’s biggest aquifers—about one-third showed signs of highly unsustainable water use.

In the new study, published in Water Resources Research, the scientists used data from the GRACE (Gravity Recovery and Climate Experiment) satellite mission to assess trends in the aquifers. This mission, which began in 2002, is a joint effort between the U.S. National Aeronautics and Space Administration (NASA) and Germany’s Deutsche Forschungsanstalt für Luft und Raumfahrt (DLR). Two GRACE satellites are currently in orbit around the Earth, and like their namesake suggests, these spacecraft are measuring changes in Earth’s gravity field. Because large changes in groundwater storage can be detected with the gravity field data, these data are proving to be very valuable for creating a comprehensive picture of Earth’s underground water resources. 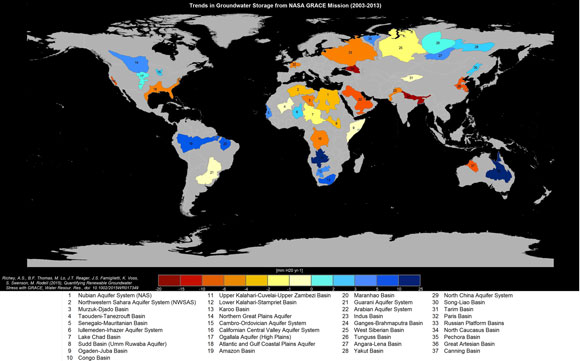 Groundwater trends in 37 of the world’s largest aquifers. Image via NASA.

Alexandra Richey, lead author of the study who completed the research as a doctoral student at the University of California at Irvine, commented on the findings in a press release. She said:

What happens when a highly stressed aquifer is located in a region with socioeconomic or political tensions that can’t supplement declining water supplies fast enough? We’re trying to raise red flags now to pinpoint where active management today could protect future lives and livelihoods.

Despite the new groundwater data, scientists still aren’t quite sure how much water is left in these aquifers—they have been able to discern trends but they have not yet been able to determine the total volume that exists. That information will be critical to obtain in the years ahead.

Jay Famiglietti, a professor at the University of California and senior water scientist at NASA’s Jet Propulsion Laboratory, pressed for such research. He said:

Given how quickly we are consuming the world’s groundwater reserves, we need a coordinated global effort to determine how much is left.

Other co-authors of the study included Brian Thomas, Min-Hui Lo, John Reager, Katalyn Voss, Sean Swenson, and Matther Rodell. This study was made possible through financial support from NASA and the University of California.

Bottom line: Scientists used new satellite data to study trends in 37 of the world’s biggest aquifers and found that 10 of these are either extremely or highly stressed. The new research was published in the journal Water Resources Research on June 16, 2015.