Major warmth and severe flooding across US Great Plains

Heavy rain and record breaking temperatures are all caused by a slow moving system across the central United States.

It is officially the first day of spring for the Northern Hemisphere. However, it has felt like late spring for the past month across many areas east of the Rocky Mountains.

Thanks to an area of high pressure dominating the eastern half of the United States, a large, high amplitude trough is having a difficult time pushing east. What does that mean? It means a lot of heavy rain and strong storms “training” over the same areas over a long period of time that results in major flooding across Texas, Oklahoma, Kansas, Missouri, and eventually into Louisiana and Arkansas.

Record-breaking warmth across the United States in March 2012

Meanwhile, one of the most unprecedented, record-breaking “heat” waves to ever hit the United States for the month of March has been in control east of this large trough. Temperatures have been consistently 20-40 degrees above average across the northern central plains, Ohio River Valley, and across the southeast. There are truly remarkable records that have been broken, and the warmth continues for most of this week until this large trough and cut-off low moves out of the United States by this upcoming weekend (March 24-25).

A synoptic look at the storm: 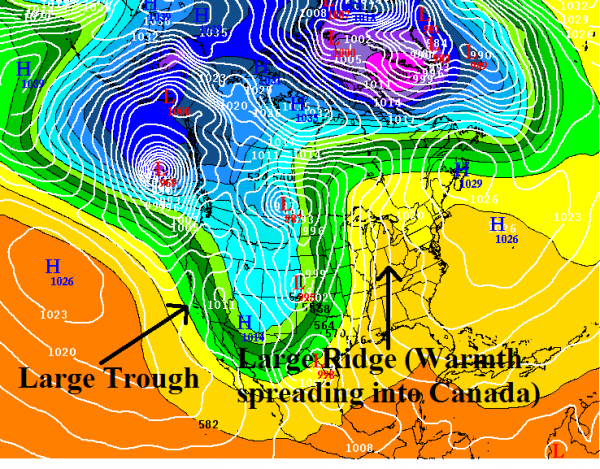 Large trough across the western United States responsible for snow in the Rockies, flooding across the central plains, and extreme warm weather east of the Rocky Mountains. Image Credit: Allan Huffman’s Weather Model and Data Page

Looking at the synoptic view of North America, or the “big” picture of the weather pattern, you can easily see the large “U” that is digging south across the western United States. In these areas, much colder air and large snowfall rates have been occurring across Nevada, Arizona, Oregon, and higher elevations across the Rocky Mountains. In parts of northern Arizona, snowfall rates ranged from three inches in the city of Cottonwood, Arizona to 53 inches in Arizona Snowbowl in Coconino county. An area of low pressure, which is over the southwestern United States is responsible for the colder temperatures and snowfall rates in these areas.

Meanwhile, a large ridge, or extended area of high pressure has brought record breaking, warm temperatures east of the Rocky mountains since the middle of last week around March 14-15, 2012. The boundary of the darker colors/cold air to the north and the yellow/warm air to the south shows us the current jet stream. The jet stream acts as an area that separates air masses. Typically along the jet stream, convection, or precipitation can occur as low pressure systems and cold fronts form. This overall pattern has been slow to change as high pressure is preventing the entire trough over the western United States from pushing east. You can take a look at the progress and slow movement of these storm based on radar imagery alone.

This was an animated radar image from the National Weather Service at 12 a.m. EDT:

Now, take a look at the radar loop at 5 a.m. EDT. Notice the increase in precipitation and just a little forward motion to the east:

From a meteorological perspective, a slow moving storm system with plenty of moisture is very worrisome. Granted, the areas currently receiving rain desperately needs the rainfall as many of these places experienced severe drought conditions this past summer. Portions of Texas, Oklahoma, Kansas, Missouri, and eventually Louisiana and Arkansas will see significant rainfall totals as a line of embedded thunderstorms and heavy rain will be training over the same areas due to very little forcing. When storms “train” over an area, we practically state that storms move over the same areas without any forward movement from the west to the east. Many roads across these regions have already been closed and shut down due to rising waters in the area. Here’s a look at some of the reports coming out of the central plains this morning as of 6 a.m. EDT:

Many areas have experienced rainfall rates of around an inch or two an hour. Tomorrow, I will have an updated map showing the rainfall amounts after the event moves out.

Here’s the Hydrometeorological Prediction Center, also called the HPC, forecast for rainfall for the next 24 hours and for the next five days. Some areas could see impressive totals over 10 inches:

Possible rainfall totals for the next five days: 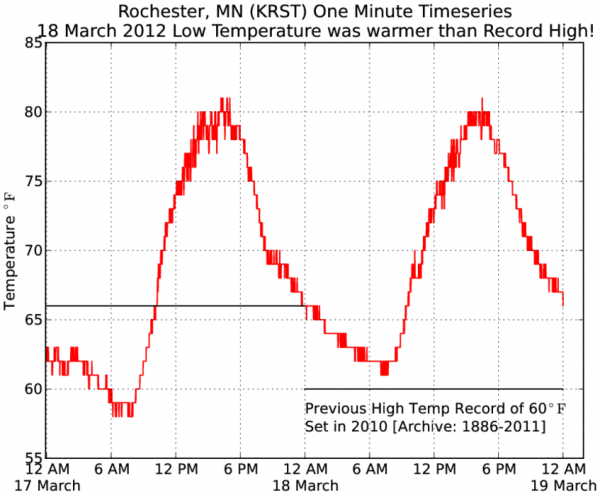 Temperatures have been over 20 to 40 degrees above average east of the Rocky Mountains and as far north as Canada. Toronto could approach record breaking temperatures on March 20 and 21, 2012 as temperatures could climb into the mid to upper 70’s. In fact, based from meteorologist Kim MacDonald, the all time record for March at Pearson airport in Toronto is 25.6 Celsius, and that record could easily be broken. In Rochester, Minnesota, their low temperature of 61°F for March 18, 2012 broke their record high of 60°F set back in 2010 and 1945!

In International Falls, Minnesota, they have broken high temperatures by over 10 degrees in some instances. Their normal high temperatures for this time of year typically falls in the range of the upper 30’s to low 40’s. They are experiencing high temperatures over 40 degrees above normal. These are temperatures typically seen in their summer months! Take a look at the amazing statistics being broken across this area via the NWS:

Heat waves in March are unusual, but a long lasting wave of record breaking high temperatures of nearly a week is almost unprecedented. We really do not have records that show such a long lasting spell of extreme warm weather over the United States since record keeping has begun back in the late 1800’s. Temperatures across the northern central plains are almost as warm as temperatures in Miami, Florida and significantly warmer than the southwestern United States.

Bottom line: A slow moving system in the western/central United States will bring flooding across the central plains and along the Mississippi River as storms will continue to train over the same areas. Meanwhile, record breaking warmth seen from Florida to Canada will continue through the middle of this week. These extreme temperatures should end by this upcoming weekend as the storm system across the central plains pushes eastward. The severe weather threat continues across Texas, Oklahoma, Arkansas, and Louisiana with wind being the main threats. The main issues will be flash flooding across these areas as the storm system slowly pushes east. Remember: avoid driving in flooded areas. Turn around, don’t drown! I’ll have an update on this system later this week.