Data from this year’s survey indicate that the dead zone in the Gulf of Mexico is above average in size, likely because of heavy rains in June.

Spatial extent of the Gulf of Mexico dead zone in 2015. Image Credit: N. Rabalais and R. E. Turner via NOAA.

Dead zones—large areas of ocean water that are mostly devoid of oxygen—are a growing problem worldwide. Triggered by nutrient-rich discharges from farms, sewage treatment plants, and other sources, they pose a major threat to marine life. Of the more than 550 dead zones that form each year around the world, the dead zone in the Gulf of Mexico is thought to be the second largest one caused by humans. Scientists have been tracking the size of the dead zone in the Gulf of Mexico for the past 30 years. Data from this year’s survey indicate that the dead zone that formed in 2015 is above average in size, likely because of heavy rains in June. 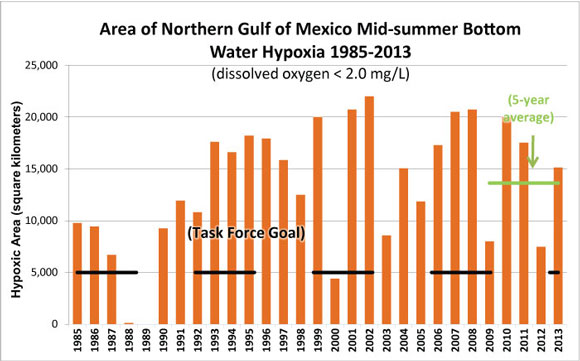 Scientists think that the larger than average dead zone this summer was caused by heavy rains in the Mississippi River basin. Rainwater picks up nitrogen and phosphorous when it flows over farm fields and urban lands, and this nutrient laden water triggers algae blooms once it reaches the warm, sunlit waters of the Gulf of Mexico. When the algae die-off and decompose, oxygen in the water column is used up and a dead zone is formed. The low oxygen water is lethal to many marine organisms that are unable to escape to waters of higher quality. The annual summer bloom in the Gulf of Mexico typically subsides as weather patterns shift and water temperatures drop in the autumn.

Nancy Rabalais, executive director of the Louisiana Universities Marine Consortium and leader of the survey to map the dead zone, commented on this year’s findings. She said:

An average area was expected because the Mississippi River discharge levels and associated nutrient data from May indicated an average delivery of nutrients during this critical month which stimulates the fuel for the mid-summer dead zone. Since the models are based largely on the May nitrogen loads from the Mississippi River, the heavy rains that came in June with additional nitrogen and even higher river discharges in July are the possible explanations for the larger size.

The annual surveys of the Gulf of Mexico dead zone are made possible through funds from the National Oceanic and Atmospheric Administration (NOAA) and the U.S. Environmental Protection Agency (EPA).

In 2001, the Gulf of Mexico Hypoxia Task Force set a target goal of 1,900 square miles (4,921 square kilometers) for the dead zone. This goal is intended to encourage nutrient runoff reduction efforts in the Mississippi River basin. The average size of the Gulf of Mexico dead zone over the past five years has been nearly three times the target goal.