July 2012 warmest month ever recorded in the U.S.

How hot was July 2012 in the U.S.? The heat for the month beat out the record heat experienced during the Dust Bowl era back in July 1936.

The weather events that shaped up July 2012. Image Credit: NCDC

In the latest State of the Climate report released by NOAA and the National Climatic Data Center, July 2012 is the warmest month ever recorded in the contiguous United States. Yes, not only the warmest July ever recorded, but the warmest month ever recorded since record-keeping began in 1895. In fact, July 2012 beat the old record set back in July 1936, the same year we experienced record heat and drought during the Dust Bowl era. The average temperature for July 2012 in the contiguous United States was 77.6 degrees Fahrenheit, beating out the 1936 record by two tenths (77.4°F). Temperatures were 3.3°F above the 20th Century average. The drought and heat across the United States once again has become the main story line for the summer of 2012. 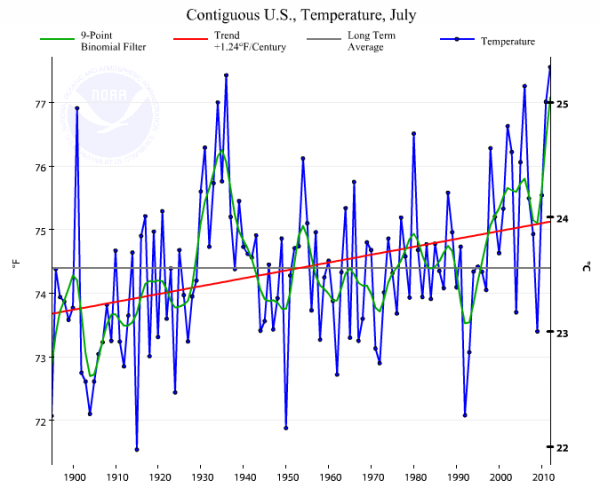 The average temperature in the contiguous United States for the month of July has been trending warmer, especially within the last two decades. Image Credit: NCDC/NOAA

In the report, NCDC states that warmer-than-average temperatures extended mainly from the Rocky Mountains and points eastwards to the Atlantic coast. Virginia had its warmest July ever recorded in the state with temperatures around 4.0°F above the average, and 32 states experienced a July in their top 10 warmest on record. January 2012 through July 2012 is the warmest seven-month period of any year on record for the contiguous United States. To add onto that, the 12-month period from August 2011-July 2012 was the warmest 12 month period ever recorded in the contiguous United States.

Of course, the cool spots in the country have occurred in the Pacific Northwest and across Alaska. In Alaska, July 2012 was the 18th coolest July on record with temperatures 1.8°F below average. 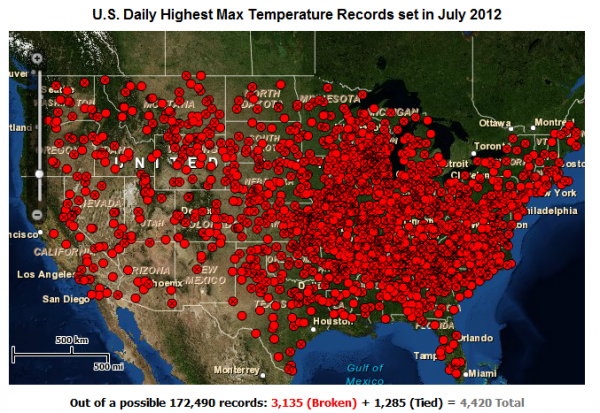 How hot was July 2012? According to the NCDC, 4,420 daily highest max temperature records were tied and broken for the month of July. To be exact, 3,135 records were broken and 1,285 records were tied. Air temperatures were all too common in the 100s in the beginning of July across a large majority of the nation. Within the last week of July, parts of the southern plains experienced temperatures over 110 degrees Fahrenheit.

Nearly 62.8% of the country is experiencing drought conditions as of July 31, 2012. Image Credit: NOAA/U.S. Drought Monitor

As of the end of July 2012, nearly 62.9 percent of the country is experiencing drought conditions. We have seen nearly a 6% increase in drought levels since the end of June 2012. Also according to the NCDC, the percent area of the country in the worst drought categories (extreme to exceptional drought) doubled, from 10% last month to 22% this month. The major drought across the Great Plains to the Midwest will cause significant problems for the United States when it comes to food prices. Meat and various vegetables could go up in price as quantity decreases and demand increases. Hot weather and dry conditions have also greatly influence wildfire conditions across the country. Nearly 2 million acres were burned nationwide during July due to wildfires.

You can view NCDC’s temperature and precipitation records for the month of July 2012 by clicking on this link.

Bottom line: July 2012 was the warmest July and also the warmest month ever recorded since record-keeping began in 1895. The heat for the month beat out the record heat experienced during the Dust Bowl era back in July 1936. Instead of comparing that era as the hottest experienced in our nation, we might have to resort to 2012 instead. The intense drought across a large majority of our nation is largely responsible for the heat waves and tornado drought experienced in the United States. With a mixture of drought and heat, nearly 2 million acres have burned across the nation in July. The only places that experienced below average temperatures are across the Northwest Pacific and in Alaska. At this rate of record warmth, 2012 is on its way to becoming one of the warmest years ever recorded. Will we continue with these above average temperatures, or will fall and winter bring cooler temperatures that will level us off for the year?