Lull in tornado activity April-July 2012 in the U.S.

Meanwhile, Canada had some severe weather and tornadoes. Videos of Canadian tornadoes in this post.

With the month of August in full swing, the United States’ tornado season, which typically peaks from March through July, has officially ended. This year, there was an active early tornado period during the months of January through mid-April, with a particularly dramatic day of tornadoes on April 14, 2012 (over 80 tornadoes across the central United States). But after mid-April, the tornado count drastically dropped, and this 2012 tornado season became extremely quiet. July 2012 recorded a preliminary report of only about 24 tornadoes, which is unusually low. Overall, the 2012 tornado season was the complete opposite of the 2011 season. Meanwhile, Canada has some severe weather and tornadoes. See the videos at the bottom of this post. 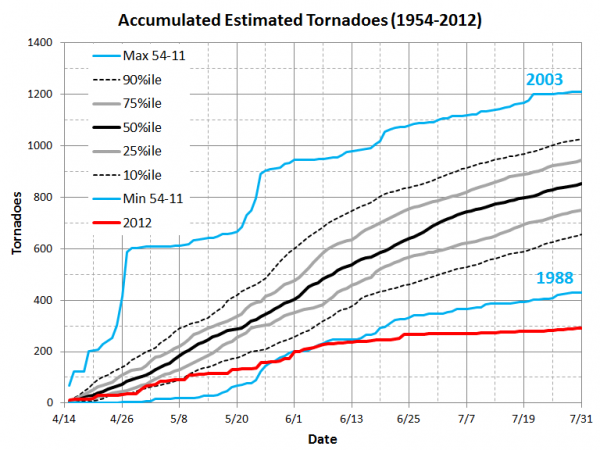 From Dr. Harold Brooks, a research meteorologist with the NOAA National Severe Storms Laboratory in Norman, Oklahoma, regarding the graph above stated:

To emphasize the small number of tornadoes since the middle of April 2012, we’ll start on 15 April and add up the number of tornadoes each year through the end of July. In the accompanying chart, we see the distribution of the accumulated number of inflation-adjusted tornadoes as we got from 15 April to July 31. The distribution is based on the period from 1954-2011. The maximum and minimum of any of those years are shown in blue (note that the year associated with the maximum and minimum can change from day to day along the way). The heavy black line is the median of the distribution, the gray lines are the 25th and 75th percentiles (half the years will be between them), and the dashed lines are the 10th and 90th percentiles (4 out of 5 years will be between them). For comparison, the estimated number of final tornado reports from 2012 are shown in red.

According to Dr. Harold Brooks, the lowest number of inflation-adjusted tornado reports for the month of July from 1954-2011 is 73 (1960). This year, 2012, had a record low of 24 preliminary reports, which leads you to believe the official reports will be slightly adjusted into the low 20s. The median count on record for tornadoes from April 15 through July is typically around 850. However, 2012 was slightly under 300. According to Brooks, 2011 had the second highest number of tornadoes in this part of the year, so in the last two years, the US has experienced the extreme high end of the distribution of the number of tornadoes and the extreme low end of the distribution.

Why did July see a low tornado count for the United States?

Statistically, but not yet proven, it appears that La Niña months bring a heighten risk for tornadoes across the United States. The jet stream typically produce stronger winds, which adds more shear to thunderstorms. This shear is one of the many vital ingredients needed for tornadoes to form. Early 2012 brought upon a weak La Niña, however, spring 2012 saw a fading La Niña that eventually became neutral. High pressure has simply dominated the weather pattern across the central United States. High pressure has provided a lot of sinking air that has produced extensive drought and massive heat waves across the central and eastern United States. Tornadoes typically occur along the northern portions of the United States in the summer months, when the jet stream is further north along the US/Canadian border. However, the jet stream was further north, and severe weather and tornadoes became a bigger issue for Canada in parts of Saskatchewan.

Check out some of these amazing videos of tornadoes in Canada this summer!

On July 24, 2012, a series of severe storms developed in the early afternoon on a north-south line through central Saskatchewan, Canada, along a surging cold front. After two or three cells developed and died, storm chaser Greg Johnson’s TornadoHunter.com crew found themselves under a developing supercell with strong rotation, just east of Regina near the town of St. Joseph’s: Bottom line: Although the beginning of 2012 was an active year for tornadoes across the United States, the activity fell significantly after April 15. July 2012 saw a record low total for tornadoes across the US, with preliminary reports in the 20s. High pressure provided a dome of sinking air with temperatures in the 90s and 100s and brought upon intensifying drought conditions across the central United States. These conditions are what brought upon the lack of severe weather/tornadoes across the region. Most of the tornadoes seen this summer have been push much further north into Canada, primarily in Saskatchewan. Out of all of the weather news we have read over the past two years, this one certainly tops the list for the most positive story of 2012!