Hurricane Sandy is a dangerous storm

The track and intensity of Hurricane Sandy is uncertain. But one thing is certain: Sandy is a dangerous storm that the U.S. east coast should monitor closely. 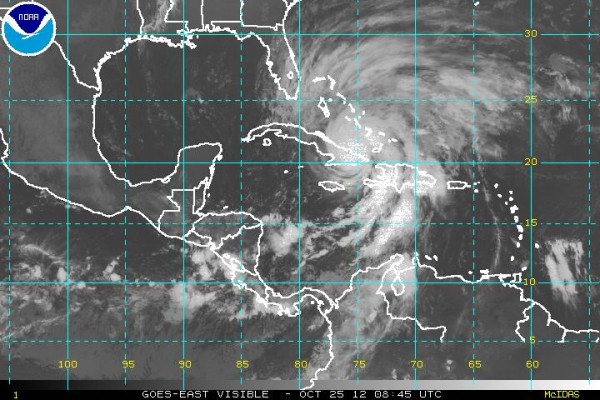 Hurricane Sandy, the 10th hurricane of the 2012 Atlantic Hurricane season, has formed and has battered parts of Jamaica with heavy rain and strong winds gusting over 100 miles per hour. Hurricane Sandy is the eighteenth named storm for this season, and out of all of the systems we have seen this year, this one has the potential to become a huge threat across the eastern coast of the United States by this upcoming Monday. Since we are still four to five days out, the intensity and exact track of Sandy as the storm pushes to the north is uncertain.

Being prepared for a hurricane

This post highlights the meteorology behind the prediction that Sandy might push into the U.S. East coast, and will showcase a couple of weather models. These models are simply one “guess” as to where Sandy could end up. There are more unknowns than certainties when it comes to forecasting Sandy. Overall, Sandy has the potential to become a dangerous storm that could impact thousands of lives. 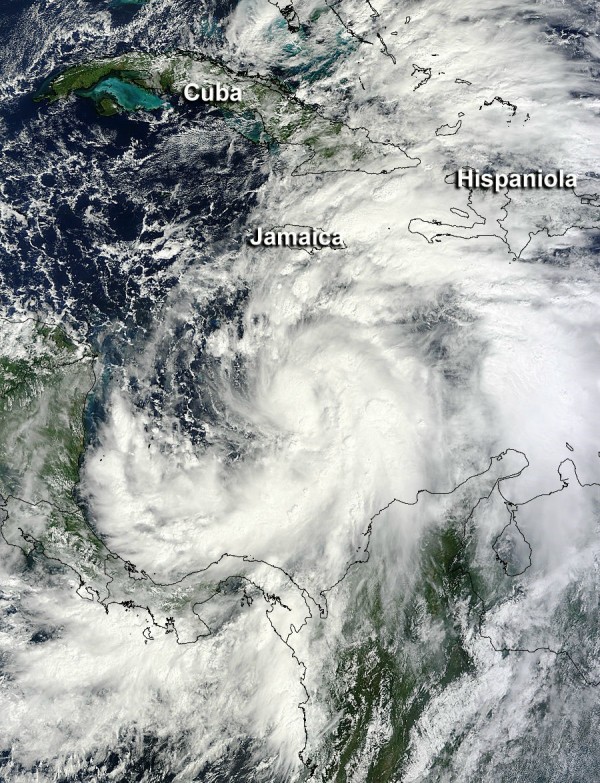 For now, Hurricane Sandy is impacting parts of Cuba and the Bahamas with heavy rain and strong winds as a Category 2 storm. There have already been reports of one death in Cuba and another one in Jamaica. There have been numerous reports that thousands of homes have been damaged or destroyed across Cuba. Significant flooding is possible in these areas, and rainfall totals could add up around five to ten inches of rain. Meanwhile, storm surge could climb five to eight feet around the Bahamas.

Storm surge will be a big story for Sandy, as this system will only grow in size. The larger the storm, the larger the storm surge. Beach erosion and flooding is possible all along the eastern United States as Sandy pushes to the north and northeast. Overall, this summarizes the tropical portion of Sandy. By the end of this weekend, I fully expect Sandy to begin losing tropical characteristics and become more typical of a mid-latitude cyclone (post-tropical).

When Sandy begins to lose tropical characteristics, it will begin to deepen and expand its wind field. Instead of having the strongest winds towards the center of the storm, Sandy will expand those winds outwards of a couple of hundred miles. It is all based on a weather feature we call “phasing”. A large trough, or area of low pressure, will be pushing into the eastern United States this weekend. This trough is significant because behind it, temperatures are nearly 20 to 30 degrees cooler. With high pressure to the north and a large trough swinging through, Sandy will likely begin a more northwesterly track that could push it into portions of New England.

Tropical systems release a lot of latent heat, and when this heat is released, it can actually strengthen the ridge to the north and thus push it into New England. For many previous runs, the Global Forecast System (GFS) model indicated the system drifting northeast into Bermuda instead of New England. However, the latest GFS runs indicate the similar track as the ECMWF, which is a northwestward turn into the Mid-Atlantic or New England. Regardless, this will be a high impact storm that will likely cause significant damage and numerous power outages across these regions. If you live in any of these areas, you should be preparing for long term power outages that could last up to a week. As we can remember from last year’s snowstorm in October, snow on trees with leaves still on them will add extra weight and will likely cause plenty of down trees. This weekend, the moon will be full, which means astronomical tides will be at their peak for the month, increasing potential storm surge flooding. 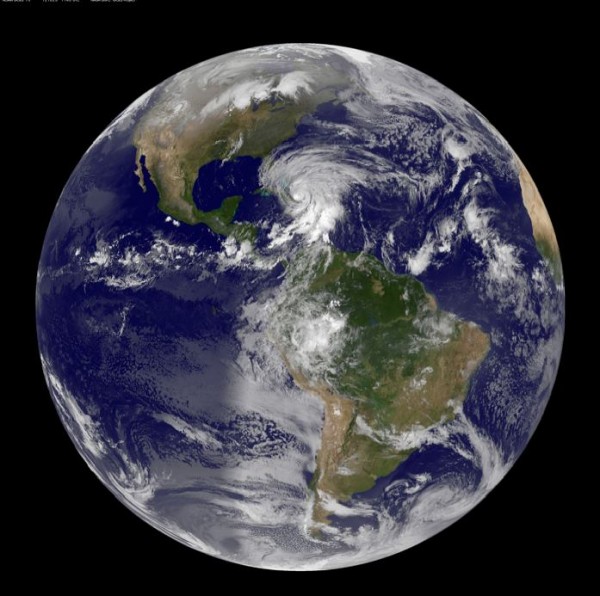 In the image below, you can see how the models have shifted towards the Mid-Atlantic/New England states each and every day. These images are called spaghetti plots, which are basically random computer models indicating their own solution of where it thinks Sandy will travel. National Weather Service offices constantly sample the atmosphere by releasing weather balloons twice a day. Due to such a large system that will impact so many people, NOAA is now going to release these balloons four times a day from every office. This has not happened since I can ever recall, and it shows how serious this storm truly is. 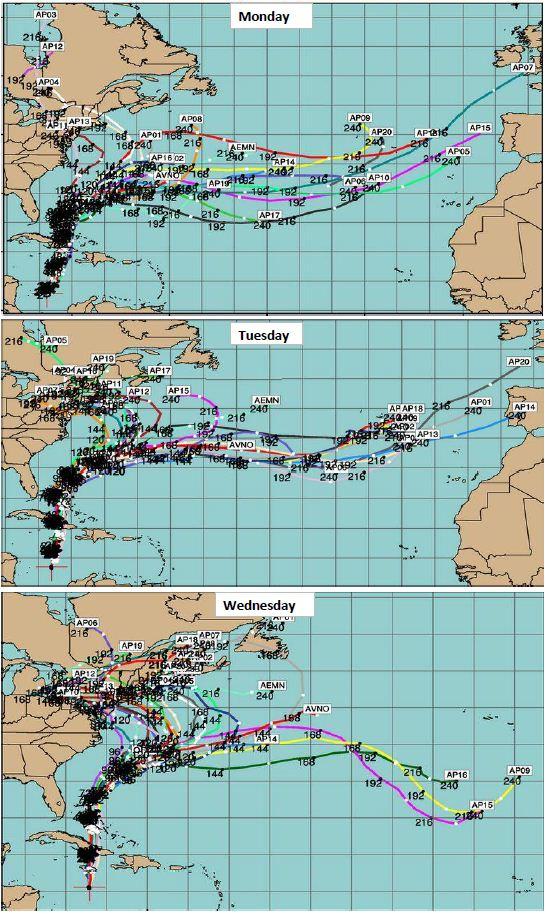 Weather models have leaned further west for each run in the GFS Ensembles. Image Credit: NWS/NOAA

Another factor that also makes me lean towards the trough absorbing or picking up Sandy is that the North Atlantic Oscillation is extremely negative. When the NAO is negative, low pressure (trough) develops across the eastern coast of the United States. It practically develops a large trough that allows cold air to travel pretty far south all the way across the southeastern United States. With Sandy pushing into New England, it will act as a large windmill that will allow an extra surge of cold air to travel further south and intensify this cold air advection. This cold air will be strong enough to produce snow across the Appalachians. It will also be strong enough to make the southeast feel like they are in the middle of winter as low temperatures will likely drop into the lower 30s in parts of Alabama and Georgia with highs only in the 50s. This is a huge system, and it could break a few records!

The NAO is extremely negative, which means lowering pressures across the eastern coast and much cooler temperatures for the eastern United States. Image Credit: CPC

Bottom line: Hurricane Sandy is a dangerous storm that the entire eastern United States should monitor very closely. It has the potential to produce widespread power outages, large storm surge along the coast, inland flooding, heavy snow in some areas, and wind damage. It is similar to the Perfect Storm from 1991, but based on the model runs, it could be much worse because Sandy is projected to be stronger and actually push into the Mid-Atlantic or New England coastline. Residents in these areas need to be prepared for power outages that could last up to a week, because I can almost guarantee that trees and power lines will go down. Sandy is a dangerous storm, and no one should underestimate this system.