Cities as geographically diverse as Chicago, Des Moines, Myrtle Beach, Atlantic City and New York City all had record high temperatures over the past week.

Unseasonable warmth broke temperature records in more than 1,054 locations in the U.S. and Canada between March 13 to 19, 2012, according to Hamweather, which also reported that daily lows were unseasonably warm, too, with record daily lows in 627 locations. Cities as geographically diverse as Chicago, Des Moines, Traverse City (Michigan), Myrtle Beach, Madison (Wisconsin), Atlantic City, New York City, and Duluth (Minnesota) all broke records for high temperatures over the past week.

As an example of the unusual warmth, Chicago saw temperatures above 26.6°Celsius (80°Fahrenheit) every day between March 14 and March 18, breaking records on all five days. The National Weather Service says that Chicago typically averages only one day in the eighties each in April. 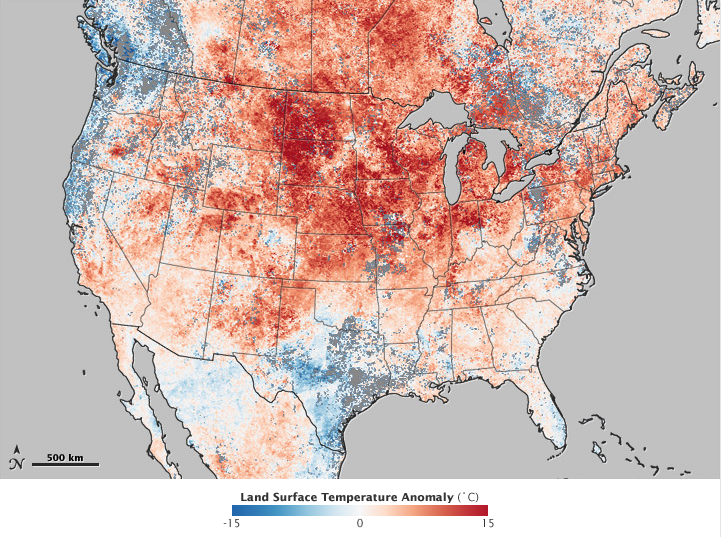 The map above – made possible by an instrument aboard NASA’s Terra satellite – shows the intensity and scope of the heat wave in terms of land surface temperature anomalies. Land surface temperatures or LSTs indicate how hot Earth’s surface in a particular location would feel to the touch.

This map above depicts temperature anomalies – in other words, it shows land surface temperatures during March 13-19 compared to the average of the same eight day period of March from 2000-2011. Areas with warmer than average temperatures are shown in red; near-normal temperatures are white; and areas that were cooler than the 2000-2011 base period are blue.

From March 17: Record breaking warmth across United States in March 2012