A persistent heat wave over southern China has been due to a stationary subtropical high in the region. Temperatures may begin to drop slowly this week.

A persistent heat wave in China has brought record-breaking high temperatures over the past weeks. The heat wave, which began in early July 2013, is expected to last until at least the middle of August. It’s hoped that temperatures might begin to drop sometime this week.

The China Meteorological Administration (CMA) reported that on July 26, 2013, temperatures at the Xujiahui observation station in Shanghai reached 40.6 °C (105.1 °F). The Washington Post and the Shanghai Daily reported that temperatures recorded by the city’s meteorological bureau in Shanghai soared to 40.8 °C (105.4 °F) on August 7, 2013. The Capitol Weather Gang at the Washington Post said two days ago:

[Last week], Shanghai eclipsed its all-time record high temperature set barely two weeks ago. The Shanghai Daily reports that the city’s meteorological bureau recorded a temperature of 105.4ºF (40.8ºC) on August 7, which breaks the previous record of 105.1º (40.6ºC) from both July 26 and August 6, 2013. Prior to this year, the all-time high at Shanghai’s Xujiahui weather observatory was 104.4ºF set in 1934. 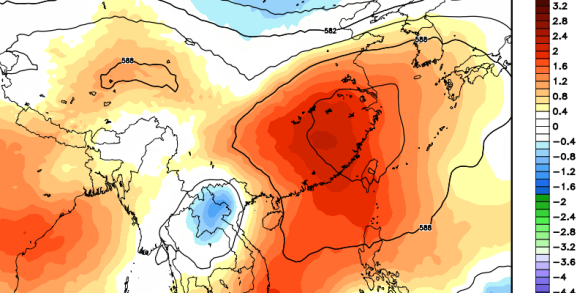 The dark oranges centered over eastern China indicate a “heat dome,” which has elevated temperatures and blocked precipitation. Image from August 8, 2013 via WeatherBell. Caption via Capital Weather Gang at the Washington Post.

Temperatures in Hangzhou, the capital of the Zhejiang province, also broke a record according to the China Meteorological Administration. On July 27, 2013, temperatures rose to 40.5 °C (104.9 °F), the highest observed in that region since 1951.

In total, 19 provinces across southern China have experienced excessive heat for the past several weeks. Several of these areas have been subjected to persistent high temperatures exceeding 35 °C (95 °F) for more than 20 days.

The heat wave has already caused at least 10 fatalities and officials are urging people to limit outdoor activities and take measures to prevent heat stroke.

He Lifu, a forecaster with China’s National Meteorological Center, CMA, said that the persistent heat wave is lingering over southern China because of a stationary subtropical high in the region. Meteorologists suggest that temperatures may begin to drop slowly this week.

Bottom line: A persistent heat wave in southern China has caused record-breaking high temperatures across the region. The heat wave, which began in early July 2013, is expected to last until the middle of August.

Where are the hottest places on Earth?