Everything you need to know: The polar vortex

The polar vortex never seeps into your house, to freeze you and your family inside. It can’t do that because it stays in the mid to high atmosphere.

The yellow dwarf is going to produce a heatwave on Earth this summer!

Now, if you hear the term yellow dwarf, you might think something exotic or unusual will happen this summer. You might, until you find out that I’m simply talking about our sun. Saying yellow dwarf instead of sun might catch on, and, if it does run rampant through social media, doubtless there will people who entirely miss the fact that I used the term originally to mean our sun. Likewise, the term polar vortex has gone viral through social media, television and people’s conversations this winter. People are using that term incorrectly, and there’s now a lot of confusion about just what a polar vortex really is. I’d like to help clear that up.

No matter where you go in the U.S. this week, you’re likely to hear about the return of the polar vortex. When people use that term, they’re speaking of what we meteorologists call an Arctic outbreak: cold, Arctic air spilling southward, this week across the eastern half of the United States. 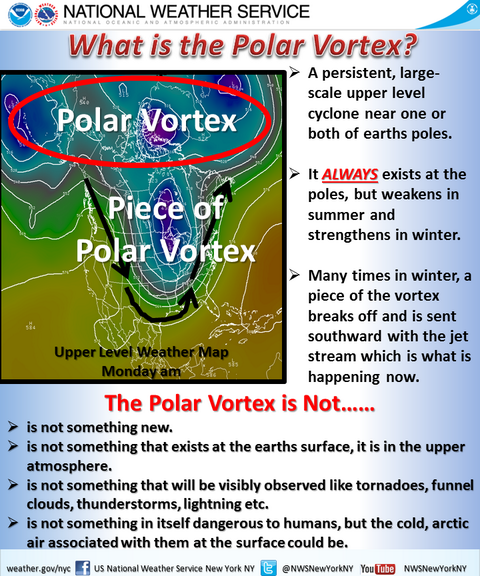 The New York NWS sent out this image in early January when the term polar vortex went viral.

A planetary-scale mid- to high-latitude circumpolar cyclonic circulation, extending from the middle troposphere to the stratosphere. The Northern Hemisphere vortex often features two centers—one near Baffin Island and the other over northeast Siberia—with analogous circumpolar asymmetry atypical in the Southern Hemisphere … The vortex is strongest during the winter in the upper troposphere and stratosphere when the pole-to-equator temperature gradient is strongest. The stratosphere component of the circulation may be referred to separately as the “polar stratospheric vortex.”

Polar vortex is a term for upper level winds that surround the poles. It is a jet stream that is several miles up into the atmosphere. It is typically always above each pole.

Still, despite the fact that most people are using it incorrectly, the term polar vortex has been so popular this winter that virtually everyone is talking about it. People are making rap songs about it, as illustrated by the video below:

Here’s something else about the term polar vortex. If you hear that the polar vortex has returned, it does not mean everyone will see record-breaking cold temperatures. Whether that happens or not depends on how far south the cold air travels.

With this next push of cold air blasting the eastern half of the United States, the areas to expect the coldest temperatures will be across the U.S. Northern Plains, Midwest, and into the Northeast. Meanwhile, temperatures will be cold across the U.S. Southeast, but nothing like the single digits Atlanta/Birmingham experienced in early January 2014.

In a way, it would be nice if the term polar vortex could slide back into the obscurity of technical expertise. Why does the public need to know this word (unless you are a big science geek and want to learn about it)? After a couple of mild and relatively calm winters in the United States, an active winter has suddenly made a splash through social media, hauling the term polar vortex along with it. Is that term here to stay? Will every winter cold snap from here call up the (incorrectly used) specter of the polar vortex? Time will tell.

Meanwhile, although temperatures remain well below average for the eastern United States, temperatures globally have been much warmer. In fact, January 2014 was the fourth-warmest January ever recorded, according to NOAA. 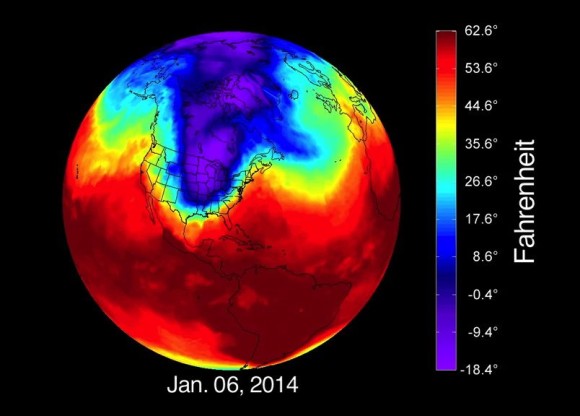 Polar vortex on Jan. 6, 2014 via NASA. This image might make you think the polar vortex is on the ground. It isn’t. It’s at least several miles up in the atmosphere.

Bottom line: The polar vortex is a real meteorological phenomenon; it is not a made-up term. Both poles have a vortex of winds above them, generally always present throughout the year and generally stronger in the winter and weaker in the summer. The polar vortex never seeps through the cracks around the windows of your house, to freeze you and your family inside; it can’t do that because it stays in the mid to high atmosphere. What happens instead is that energy from the Arctic’s polar vortex may surge southwards, as it has done this winter, to bring colder temperatures to the surface. Don’t let the term scare you. It is winter after all, and cold waves are bound to happen. We should simply go back to basics and call these things “Arctic outbreaks.”