High-precision measurements of Earth’s gravitational field by the GOCE satellite have produced the most detailed mapping yet of subtle changes in gravity across the Earth’s surface.

Subtle gravitational differences across Earth’s surface are being measured, with unprecedented accuracy, by the Gravity Field and Steady-State Ocean Circulation Explorer (GOCE) satellite, built and operated by the European Space Agency. The data will provide scientists with a powerful foundation for further research into ocean circulation, sea level change, the structure and dynamics of Earth’s interior, as well as movements of Earth’s tectonic plates to better understand earthquakes and volcanoes.

GOCE was launched on March 17, 2009, from the Plesetsk Cosmodrome in northern Russia. It was carried into orbit by a modified intercontinental ballistic missile (decommissioned following the Strategic Arms Reduction Treaty). The satellite’s main data collection instrument is called a gradiometer; it detects very small variations in gravitational force as it travels over Earth’s surface. There’s also a Global Positioning System (GPS) receiver that works with other satellites to identify non-gravitational forces that may affect GOCE, as well as a laser reflector that allows GOCE to be tracked by ground-based lasers.

Animation of the GOCE geoid. Credit: ESA.
This animation of a rotating “potato-like” Earth shows a very precise model of Earth’s geoid created from data obtained by GOCE and released on March 31, 2011, at the Fourth International GOCE User Workshop in Munich, Germany. Colours represent deviations in height (–100 to +100 meters) from an “ideal” geoid. The blue colours represent low values and the reds/yellows represent high values. This geoid does not represent actual surface features on Earth. Instead, it’s a complex mathematical model built from GOCE data that show, in a highly exaggerated way, the relative differences in gravity across Earth’s surface. It can also be thought of as the surface of an “ideal” global ocean shaped only by gravity, without the influence of tides and currents.

Scientifically, a geoid is defined as an equipotential surface, that is, a surface that’s always perpendicular to Earth’s gravitational field. An illustration in the Wikipedia entry about it, shown below, provides a high-level description: in the figure, the plumb line (a weight attached to a cord) at each location always points down towards the Earth’s center of gravity. Therefore, a hypothetical surface that’s perpendicular to that plumb line is a local geoid surface. When mathematically stitched together and calibrated to a mean sea level, those perpendicular surfaces at many locations around the Earth form a geoid, a model of how gravity changes over the surface of the Earth.

The gravitational “landscape” of a geoid is based solely on the Earth’s mass and morphology. If the Earth were not rotating, if there were no movement of air, sea, or land, and if the Earth’s interior were uniformly dense, a geoid would be a perfect sphere. But Earth’s rotation causes the polar regions to flatten down slightly, making Earth an ellipsoid instead of a sphere. As a result, the force of gravity is slightly stronger at the poles compared to the equator. Smaller variations in gravity across the Earth’s surface are caused by differences in the thickness and rock density of Earth’s crust, as well as density differences and convection deep in Earth’s interior.

Scientists can use the high resolution geoid based on GOCE’s data as a gravitational reference frame for other Earth sciences investigations. Ocean circulation, sea level changes, and the melting of ice caps — important indicators for climate change — cause variations in actual ocean surface heights that can be measured by other Earth observatories. These observations, calibrated against a good geoid model, will significantly help in better understanding Earth’s climate dynamics.

Density differences and convection in Earth’s mantle also affect the gravitational field. For instance, the GOCE geoid model show a “depression” in the Indian Ocean and “plateaus” in the North Atlantic and Western Pacific. Gravity data could show signatures of powerful earthquakes and volcanoes, providing knowledge that may someday help scientists predict these natural disasters. There are also important applications in geo-information systems, civil engineering, mapping, and exploration that will be enhanced by a more refined geoid model. 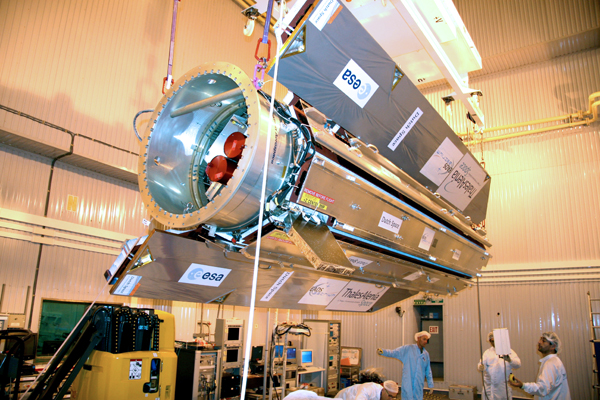 Engineers working on GOCE GOCE in the cleanroom at the Plesetsk Cosmodrome in Russia. Image Credit: ESA.

Since its launch in March of 2009, except for a brief period for spacecraft systems checks and a temporary operational glitch, GOCE has been collecting data on our planet’s gravitational field as it orbits Earth in an approximate north-south direction (polar orbit), at an altitude of just 250 kilometers. This is unusually low for a low-Earth orbit but it’s required because the best gravitational field measurements are obtained when GOCE gets as close as possible to Earth’s surface while still maintaining its orbit. The satellite’s aerodynamic shape helps stabilize it as it skims atop the atmosphere’s edge, but inevitably, the rarefied air causes a drag on the satellite that slows it down. Therefore, to maintain its orbital velocity, GOCE uses its ion propulsion system to give itself an occasional boost.

The mission was originally supposed to last 20 months, the estimated time it would have taken for GOCE to use up all its fuel. But an unusually quiet solar cycle minimum had thinned the upper atmosphere, reducing drag on the satellite, which enabled it to conserve fuel. Because it has fuel reserves remaining, the mission has been extended till the end of 2012, allowing GOCE to continue collecting data that will increase the already high precision of its gravity measurements. 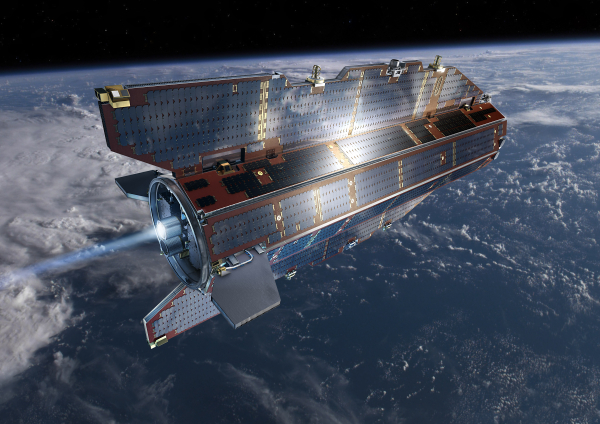 Artist’s depiction of GOCE in orbit above Earth. One side of the satellite always faces the sun. Solar panels mounted on the ‘sunny side’ provide power for the spacecraft. They are made of materials that can withstand temperatures as high as 160ºC (320 ºF) and as low as -170ºC (-274 ºF). Image Credit: ESA.