El Reno tornado on May 31 now widest ever recorded in U.S.

On June 4, 2013, the National Weather Service office in Norman, Oklahoma announced that the May 31 El Reno, Oklahoma tornado – responsible for killing highly respected storm chasers Tim Samaras, Paul Samaras and Carl Young – is now the widest tornado ever recorded in the United States at 2.6 miles (4.2 km) wide. The National Weather Service confirmed that the El Reno tornado, which was originally ranked as an EF-3 tornado, has been reclassified as an EF-5 tornado with winds greater than 200 miles per hour. Its path across the ground was 16.2 miles. 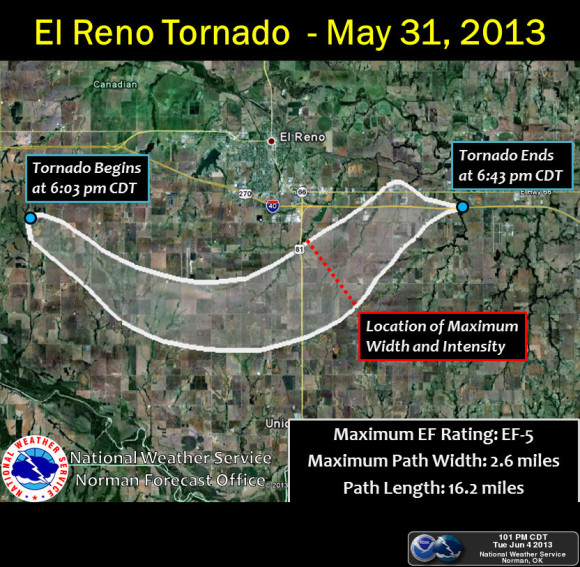 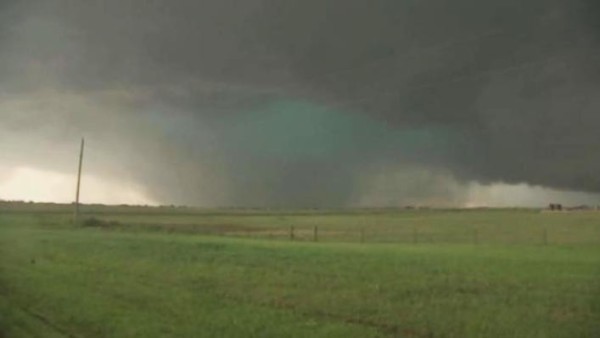 El Reno tornado. It has also been reclassified as an EF-5 tornado with winds greater than 200 miles per hour. Three storm chasers were killed in this storm. Image by Mike Bettes of TWC.

From the National Weather Service Office in Norman, Oklahoma:

METEOROLOGISTS WITH THE NATIONAL WEATHER SERVICE AND RESEARCHERS FROM THE UNIVERSITY OF OKLAHOMA CONTINUE TO INVESTIGATE INFORMATION RELATED TO THE MAY 31 EL RENO TORNADO. 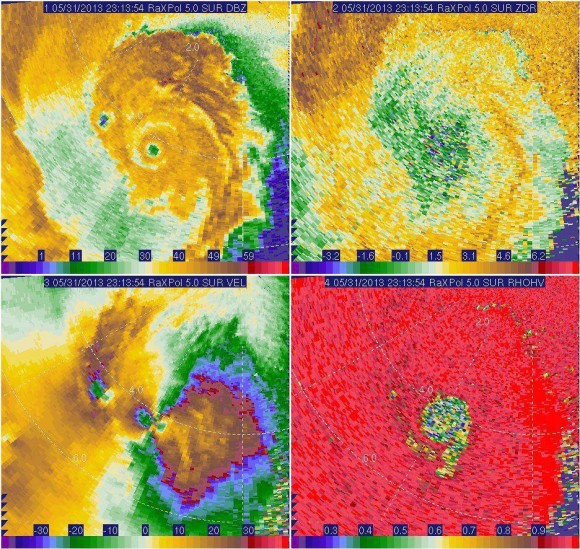 Mobile radar image showing the El Reno tornado. It looks like a hurricane! Image via University of Oklahoma

The radar images above were taken by a University of Oklahoma research team using the RaXPol mobile radar. In the image, wind speeds of 296 mph at 500 feet above ground level are indicated. Additionally, multiple vortices can be seen in the data.

How wide would the El Reno tornado have been if you put all its 2.6-mile width over a large city? 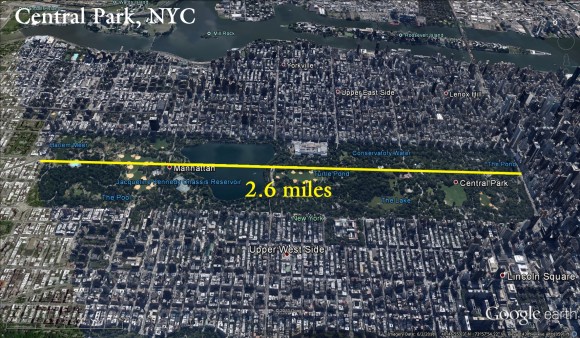 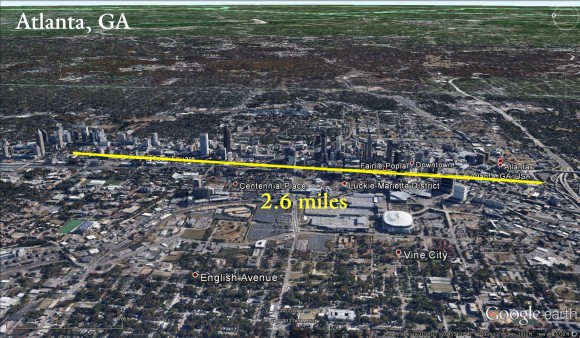 The size and intensity of this large and violent tornado in El Reno, Oklahoma on May 31 explains why experienced storm chasers Tim Samaras, Paul Samaras and Carl Young, plus others whose vehicles were overturned, were caught in the tornado’s path. It’s highly likely that this tornado grew in size and intensity within a matter of minutes, as it shifted its track to the north near Interstate 40, where many storm chasers were moving fast down the highway, trying to keep the tornado in their sights. Not only was the tornado growing in size, but it was growing in intensity as well and apparently caught the chasers off guard.

This tornado proves one other thing: Storm chasers are vital for learning about supercells and tornadoes. Without the mobile dopplar radar carried in their vehicles, the NWS would likely never have reclassified this tornado as an EF-5 or been able to re-calculate its enormous width of 2.6 miles.

For a full two hour discussion about the El Reno, Oklahoma tornado, check out the Weatherbrains episode above. It was recorded Monday, June 3, prior to the announcement of the width and intensity of this tornado.

Bottom line: The National Weather Service has classified the El Reno, Oklahoma tornado on May 31, 2013 as an EF-5 tornado and it has changed the estimate of its width to be around 2.6 miles (4.2 km) wide. The May 31 El Reno tornado is now the widest tornado ever recorded in the United States.

Scarred landscape in Oklahoma from May 20 tornado