Scarred landscape in Oklahoma from May 20 tornado

Track left behind by ES-5 Moore-Newcastle, Oklahoma tornado on May 20, 2013. The tornado took at least 24 lives, injured hundreds and damaged 13,000 structures.

This tornado track across central Oklahoma is from the EF-5 tornado that struck the suburbs of Oklahoma City in the Newcastle-Moore area on May 20, 2013. NASA’s Terra satellite captured the image. In this false-color image, infrared, red, and green wavelengths of light have been combined to better distinguish between water, vegetation, bare ground, and human developments. Water is blue. Buildings and paved surfaces are blue-gray. Vegetation is red. The tornado track appears as a beige stripe running west to east across this image; the color reveals the lack of vegetation in the wake of the storm. 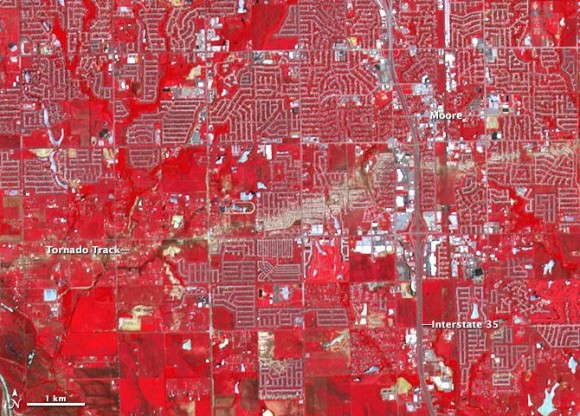 This devasting tornado killed at least 24 people, injured 377, and affected nearly 33,000 in some way. NASA said:

Early estimates suggest that more then $2 billion in damage was done to public and private property; at least 13,000 structures were destroyed or damaged. It was the deadliest tornado in the United States since an EF-5 event killed 158 people in Joplin, Missouri, in 2011.

According to the National Weather Service, the tornado was on the ground for 39 minutes, ripping across 17 miles (27 kilometers) from 4.4 miles west of Newcastle to 4.8 miles east of Moore, Oklahoma. At its peak, the funnel cloud was 1.3 miles (2.1 kilometers) wide and wind speeds reached 210 miles (340 km) per hour.

Bottom line: Track left behind by ES-5 Moore-Newcastle, Oklahoma tornado on May 20, 2013. The tornado took at least 24 lives.

El Reno tornado on May 31 now widest ever recored in U.S.