UPDATE SEPTEMBER 2, 2014. A white plume, with a blue tint below, rose from the active fissure at Holuhraun in Iceland, which stretches to the northeast from Iceland’s Bárðarbunga volcano. Observers have been watching this volcano carefully. It is located beneath a large glacier in Iceland, and an explosive, ash-laden eruption could shut down European air space, as Eyjafjallajökull did for six days in April, 2010. The Holuhraun fissure fields have been erupting with high lava fountains since Sunday morning (August 31), with no apparent release of ash. Yesterday’s observed plume was the first such plume to be seen. It drifted east-northeast with a maximum height yesterday of 15,000 feet from the eruptive site. The plume formed a cloud with very sharp edges at the top and below, said the Icelandic Met Office (IMO), which added:

It didn‘t seem that any ash came from the cloud. The white color of the plume does not suggest any ash.

According to webcam observation there is no visible change in activity since yesterday with effusive lava eruption and fountains.

Seismic activity has been rather quiet this night. Biggest earthquake measured was early in the night, 3.1 in magnitude.

Yesterday (September 1, 2014), the Scientific Advisory Board of the Icelandic Civil Protection met and provided conclusions about the recent activity at the Bárðarbunga volcano and its related fissure fields, which heated up some weeks ago, around mid-August 2014. There have been thousands of small earthquakes and a few moderate ones, and now this week the lava fountains and plume at Holuhraun. You can read all the Scientific Advisory Board’s entire statement at IMO’s website (check the update for September 1).

Of most interest, perhaps, are the four scenarios of what might happen next. According to the advisory board on September 1:

It remains unclear how the situation will develop. Four scenarios are still considered most likely:

1. The migration of magma could stop, resulting in a gradual reduction in seismic activity and no further eruptions.

2. The dike could reach the Earth’s surface causing another eruption, possibly on a new fissure. Lava flow and (or) explosive activity cannot be excluded.

3. The intrusion reaches the surface and another eruption occurs where either the fissure is partly or entirely beneath Dyngjujökull [glacier]. This would most likely produce a flood in Jökulsá á Fjöllum and perhaps explosive, ash-producing activity.

4. An eruption in Bárðarbunga. The eruption could cause an outburst flood and possibly an explosive, ash-producing activity. In the event of a subglacial eruption, it is most likely that flooding would affect Jökulsá á Fjöllum. However it is not possible to exclude the following flood paths: Skjálfandafljót, Kaldakvísl, Skaftá and Grímsvötn.

Other scenarios cannot be excluded, they added, so guess we’ll have to wait and see. In the meantime, check out the cool videos below. The first one is from Simon Redfern, who said some lava fountains from Holuhraun are now 200 meters high!

UPDATE SEPTEMBER 1, 2014 A considerable eruption occurred this weekend along the fissure that stretches to the northeast from Iceland’s Bárðarbunga volcano, currently the most-watched volcano in the world. The eruption was up to 50 times bigger than what occurred on Friday, August 29. GlacierHub reports:

At the Holuhraun lava field, lava has been erupting since Sunday morning. These lava fountains reach more than 50 meters high. Though they are dramatic, they do not release ash that would interfere with aviation. This activity is about five kilometers from Dyngjujökull Glacier. If the fissure opens under the glacier, floods might result.

A lava eruption started in Holuhraun shortly after 04 AM, on the same volcanic fissure, which erupted earlier this week. The fissure is estimated to be 1,5 km long. It was detected on Míla´s web-camera at 05:51 AM. Fewer earthquakes seem to follow the event than in the previous eruption, but more lava is being extruded. At 07 AM the lava flow was around 1 km wide and 3 km long towards northeast. The thickness was estimated a few meters, the flow rate about 1000 m3 per second. There has been poor visibility until 11:30 UTC, then it has been moderate. The eruptive fissure is visible since then and magma extrusion is still ongoing. White steam rising from the eruption is also visible.

The Icelandic Met Office raised the aviation code to red early Sunday, but later lowered it back to orange. Observers say that is because there is literally no ash production with this new eruption, so air travel is not endangered.

However, what’s left of Hurricane Cristobal was approaching Iceland Sunday evening, bringing wind and rain to the southeastern part of the country, which is where the volcano happens to be. The bad weather will temporarily bring to a halt all aerial reconnaissance of the volcanic activity. Ben Orlove of Columbia University and GlacierHub commented:

Just amazing to think of the heavy winds and rain in Iceland, falling on the lava fountains, while researchers and civil authorities wait to be able to conduct more reconnaissance flights.

UPDATE AUGUST 29, 2014. Radar has not detected any volcanic ash – and there are no signs of explosive activity – at the Bárðarbunga volcano, which erupted at midnight local time on Friday. The eruption created a new fissure in the area Holuhraun, located in the northern extension of older volcanic fissures that stretch northeast of Bárðarbunga, on the northern part of Dyngjujökull, Iceland’s largest glacier. The Icelandic Met Service had briefly raised the aviation warning level at Bárðarbunga to red, but after a few hours brought it back to orange. There is a small area restricted to aviation, but it does not extend even to the regional airport at Akureyri in the north.

According to a report from GlacierHub

The lava is being emitted from a fissure about 900 meters long, with what the Civil Protection Authority calls “low lava fountains with thin flowing lava.” The lack of ash means that the risk to aviation at present is small. Had the eruption occurred under the ice, there would have been a much larger risk of an ash cloud like the one in 2010 that halted air traffic for six days.

An eruption started in Holuhraun north of Dyngjujökull at around 00:02. Seismic tremor was observed on all seismic stations and the web camera installed in the area by Mila has showed some nice pictures of the eruption. It is a small fissure eruption and at 02:40 AM the activity appears to have decreased.

Seismic activity has decreased as a result of the pressure release, however a significant amount of earthquakes is still detected in the magma dike, between the eruption site and south to about 5 km into Dyngjujökull.

Airspace up to 18,000 feet in an area of northern central Iceland, between the Vatnajokull glacier and the town of Akureyri, has been closed. 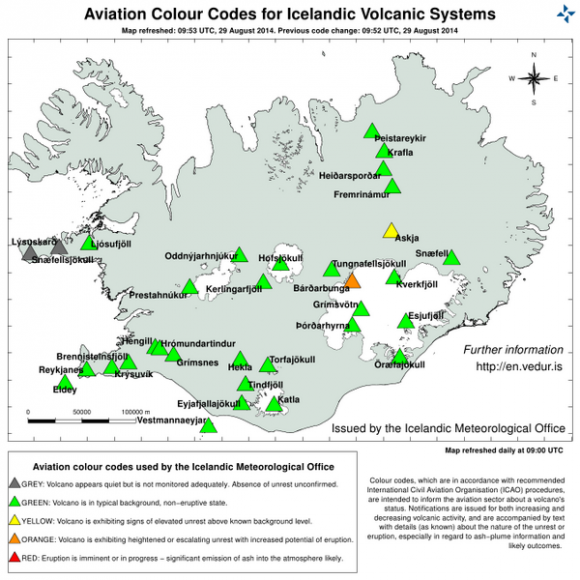 UPDATE AUGUST 28, 2014. Iceland is shaking as the Bárðarbunga volcano, located under the ice of the country’s large Dyngjujökull glacier, continues to threaten an eruption. This volcano has shown signs for nearly two weeks of a possible eruption, but no eruption yet. If it happens, it could shut down air traffic across Europe. Thousands of small earthquakes, and several moderately strong earthquakes, have occurred in the area in recent days. The Iceland Met Office – best place to get updates on the volcano – said on August 28 that two earthquakes of magnitude 4.1 and 4 occurred at Bárðarbunga. Late in the day on August 27, they said:

Scientists from IES and IMO on a flight to Vatnajökull tonight discovered a row of 10-15 m deep cauldrons south of the Bárðarbunga caldera. They form a 6-4 km long line. The cauldrons have been formed as a result of melting, possibly a sub-glacial eruption, uncertain when. Heightened tremor level/volcanic tremor has not been observed on IMO’s seismometers at the moment. The new data is being examined.

Fractures, about four to six kilometers long, have formed north of Vatnajökull outlet glacier Dyngjujökull, northeast of Bárðarbunga, as reported by RÚV [television], visir.is and the Iceland Met Office. Small calderas (also known as lows or cauldrons) have formed in the glacier and it cannot be ruled out that an eruption has started.

Get updates on the volcano from the Iceland Met Office.

AUGUST 27, 2014: The USGS is reporting a strong earthquake of magnitude 5.7 at Iceland’s Bárðarbunga volcano, which is a volcano located under the ice of Vatnajökull, the country’s largest glacier. This region has undergone hundreds of small earthquakes over the past 10 days, leading many to speculate about an eruption might be imminent. If this volcano did erupt, it could spew ash and steam high in the atmosphere, possibly shutting down air traffic as the Eyjafjallajokull volcano did for six days in 2010. Although last night’s earthquake was the biggest of the tremors at Bárðarbunga volcano over the past 10 days, but there is still no sign of an eruption, the Iceland Meteorological Office said earlier today (August 26, 2014).

This weekend, the aircraft alert code over Iceland was raised briefly from orange to red when it appeared an eruption was taking place under the ice. However, the possible eruption then appeared to subside (or possibly never occurred at all), and the alert code was lowered to orange again on Sunday.

A red alert indicates an eruption is imminent or under way with a significant emission of ash likely.

Bottom line: Bárðarbunga volcano has shown signs for nearly two weeks that an eruption might be imminent, but no eruption yet. An eruption from this sub-glacial volcano could shut down air traffic. Aerial surveys this week revealed a row of deep cauldrons south of the Bárðarbunga caldera. They are also seeing fractures in glacier ice near the volcano.

Thank you! Your submission has been received!
Oops! Something went wrong while submitting the form.
END_OF_DOCUMENT_TOKEN_TO_BE_REPLACED