The risk of an exploding glacier is heating up in Iceland

Icelandic Meteorology Office closely monitoring Bárðarbunga, a volcano more than 2,000 meters in elevation, located beneath the country’s largest glacier. Aviation code now back down to orange.

UPDATE August 24, 2014: The Icelandic Meteorology Office (IMO) – best place to get updates on this volcano – said yesterday (August 23) that seismic data indicates a small lava-eruption under the Dyngjujökull glacier. The aviation code was raised to red at that time, but, by today (August 24), it was again lowered to orange, as seismic activity appeared to subside. IMO said:

According to interpretation, magma has come in touch with ice. This has not resulted in flooding yet. However, tourists have been guided to leave the relevant area. No visible changes were seen when the Icelandic Coast Guard airplane TF-SIF flew over the area this afternoon with representatives from the Civil Protection and experts from the Icelandic Met Office and the Institute of Earth Sciences. Data from radars and web-cameras is being received, showing no signs of changes at the surface. The estimate is that 150-400 meters of ice is above the area.

The August 18 article below is republished with permission from a brand new website GlacierHub. The post is by Ben Orlove of Columbia University.

Will lava soon hit glacier ice, unleashing an explosion that would spew ash and steam high in the atmosphere? The Icelandic Meteorology Office (IMO) thinks that the probability of such an event in their country has increased. Through August 16, 2014, the risk level had been at code green – a “background, non-eruptive state.” The IMO has upgraded the risk twice in the last two days, on August 17 to code yellow, and early in the day on August 18 to code orange, indicating that a “volcano shows heightened or escalating unrest with increased potential of eruption.”

The focus of this IMO monitoring is on Bárðarbunga, a volcano more than 2,000 meters in elevation, located beneath Vatnajökull, the country’s largest glacier. According to an Icelandic source, Mbl.is, since midnight on the morning of August 18, the IMO has detected about 950 eart­hqua­kes at Bárðarbunga. 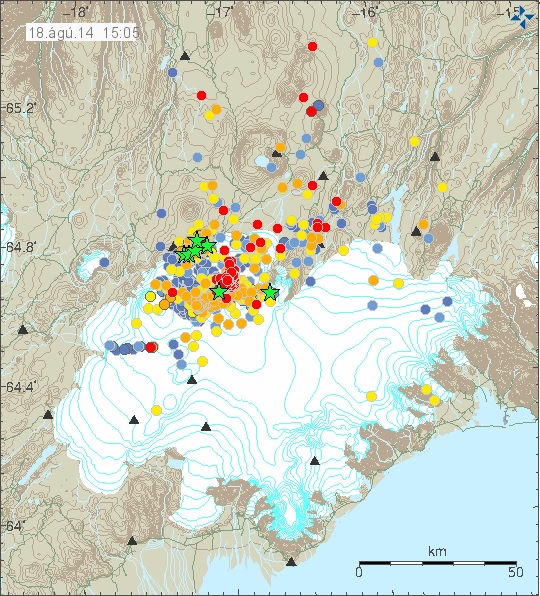 Detail of earthquake activity on Monday, August 18 with detail of glacier. 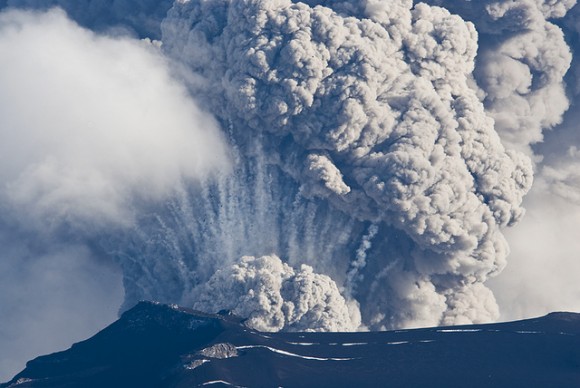 The IMO has been particularly concerned by what it calls a “seismic swarm.” (If you were wondering how to say that in Icelandic, the answer is “skjalftahrina.”) This term, in either language, refers to a cluster of earthquakes.

This recent swarm began early in the day on August 16 and has continued to the present. More than 1400 earthquakes have been recorded since August 16, some small, some medium-sized, concentrated near the faults associated with the volcano. These swarms constitute a second line of evidence that an eruption may occur, since such earthquakes can be created by pools of magma as they move upward.

The earthquakes in the last 24 hours have been more numerous, more powerful, and closer to the surface—all pointing to an increased likelihood of eruption.

The responsibility for monitoring such risks falls to the IMO because sub-glacial volcanic eruptions can create vast plumes of material that reach into the atmosphere. This phenomenon is critical for Iceland because of its location on the paths of many flights between western Europe and the East Coast of the US. When the Eyjafjallajökull volcano erupted in this manner in April 2010, flights were cancelled for six days, affecting ten million passengers. The lava was released under a thick cap of glacier, creating a vast plume of ash and steam that was propelled up to an elevation of 9,000 meters. The resulting cloud, presenting a great threat to airplanes, was carried long distances by the jet stream. It covered Norway, Sweden, Denmark, Britain and the Netherlands, as well as large portions of Finland and Germany, and reached far into Russia. On a more local scale, residents and domestic animals had to remain inside for a number of days, and the rivers in the region were flooded with hot water. The ash-fall covered fields and pastures, creating problems for farmers.

You can check out a video (below) taken by a brave pilot who flew his plane over the volcano on Sunday. And you can follow this situation at the IMO. By the way, the Icelandic word for “weather” is easy for English-speakers—it’s “veður,” pronounced “vethur.” 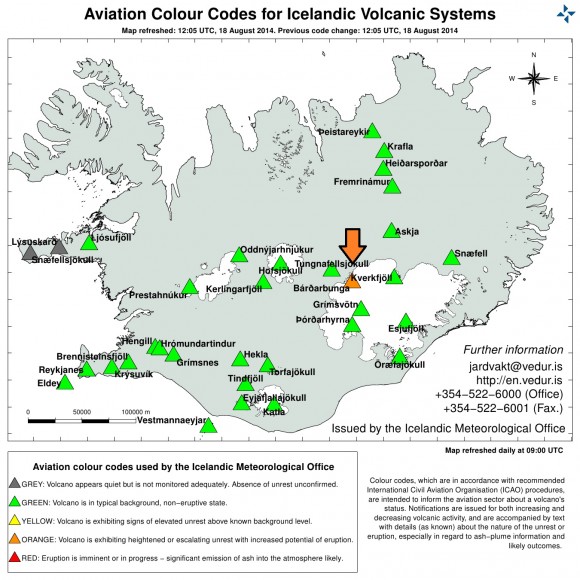 The Icelandic Meteorological Office is continuing to monitor the situation closely. It is coordinating with the local civil defense authority, which has closed roads because of flood risks, and with the International Civil Aviation Organization as well.

Read a story on GlacierHub about an Icelandic glacier that does not have a volcano under it, but presents other dangers.

The first fissure that opened on Fimmvörðuháls, as seen from Austurgígar in 2010. Image credit: David Karnå/Wikimedia Commons