Crocodiles work as a team to hunt their prey

Crocs are able to conduct highly organized game drives. They might be second only to humans in their hunting prowess, says a researcher. 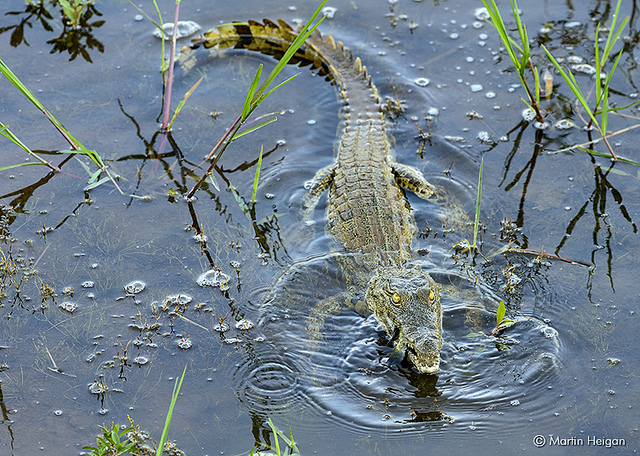 Recent studies have found that crocodiles and their relatives are highly intelligent animals capable of sophisticated behavior such as advanced parental care, complex communication, and use of tools for hunting.

New research published in the journal Ethology Ecology and Evolution shows just how sophisticated their hunting techniques can be.

Vladimir Dinets, a research assistant professor in the Department of Psychology at University of Tennessee has found that crocodiles work as a team to hunt their prey. His research tapped into the power of social media to document such behavior.

Studying predatory behavior by crocodiles and their relatives such as alligators and caimans in the wild is notoriously difficult because they are ambush hunters, have slow metabolisms and eat much less frequently than warm-blooded animals. In addition, they are mostly nocturnal and often hunt in murky, overgrown waters of remote tropical rivers and swamps. Accidental observations of their hunting behavior are often made by non-specialists and remain unpublished or appear in obscure journals.

To overcome these difficulties, Dinets used Facebook and other social media sites to solicit eyewitness accounts from amateur naturalists, crocodile researchers, and nonscientists working with crocodiles. He also looked through diaries of scientists and conducted more than 3,000 hours of observations himself.

All that work produced just a handful of observations, some dating back to the nineteenth century. Still, the observations had something in common—coordination and collaboration among the crocodiles in hunting their prey. Dinets said:

Despite having been made independently by different people on different continents, these records showed striking similarities. This suggests that the observed phenomena are real, rather than just tall tales or misinterpretation.

Crocodiles and alligators were observed conducting highly organized game drives. For example, crocodiles would swim in a circle around a shoal of fish, gradually making the circle tighter until the fish were forced into a tight “bait ball.” Then the crocodiles would take turns cutting across the center of the circle, snatching the fish.

Sometimes animals of different size would take up different roles. Larger alligators would drive a fish from the deeper part of a lake into the shallows, where smaller, more agile alligators would block its escape. In one case, a huge saltwater crocodile scared a pig into running off a trail and into a lagoon where two smaller crocodiles were waiting in ambush—the circumstances suggested that the three crocodiles had anticipated each other’s positions and actions without being able to see each other. Dinets said”

All these observations indicate that crocodilians might belong to a very select club of hunters—just twenty or so species of animals, including humans—capable of coordinating their actions in sophisticated ways and assuming different roles according to each individual’s abilities. In fact, they might be second only to humans in their hunting prowess.

Dinets said more observations are needed to better understand what exactly the animals are capable of. And these observations don’t come easily, he said.

Bottom line: Vladimir Dinets, a University of Tennessee researcher, has found that crocodiles work as a team to hunt their prey. His research tapped into the power of social media to document such behavior.

Via the University of Tennessee