Craters have appeared on two glaciers in Iceland

This article is republished with permission from a brand new and cool website GlacierHub. The post is by Ben Orlove.

The recent volcano eruptions in Iceland have created enormous circular depressions in two of the country’s glaciers. These dramatic features, which differ from each other in their origins and shape, are visible from the air.

A reconnaissance flight over Bárðar­bunga, the volcano where the first earthquakes were detected last month, shows that the ice over the caldera has fallen nearly 20 meters across an area about 7 kilometers long and 5 kilometers wide. This is a change in volume of 250 million cubic meters. The scientists at the University of Iceland attribute this shift to a movement of the base of the glacier rather than to melting. Magma has drained from a chamber under the glacier as it moves to the northeast and erupts onto the surface. As the chamber has emptied, the rock above it has shifted downward, carrying the glacier ice downward as well. This is the largest subsidence that has been observed in Iceland since measurements of the surface were begun over fifty years ago. This movement does not seem to be associated with geothermal activity at Bárðar­bunga, or of a higher likelihood of an eruption there. A recent photo from a helicopter flight shows the large extent and relative shallowness of this cauldron (the technical term for these craters).

Another flight travelled over Dyngjujokull Glacier, to the northeast of Bárðar­bunga. It showed two separate depressions, somewhat smaller in extent, but almost twice as deep, reaching down 35 meters. These are probably associated with small eruptions of lava below the surface of the ice. Such eruptions can cause the formation of cauldrons like these, without unleashing outburst floods. There is some risk of continued eruptions, including larger ones, at this site.

In recent days, the lava eruptions from the main fissure have been moving in two directions. The main flow from the eruptions is traveling to the northeast. It has recently reached the Jökulsá á Fjöl­lum River, releasing large quantities of steam. As this intrusion of lava into the river continues, explosive releases of gasses could occur, or a dam could be formed by the cooled lava, creating a lake and subsequent floods. A smaller branch of the fissure has opened close to Dyngjujokull. Should another branch open up a few kilometers to the south, under the glacier itself, there might be a flood or an explosive release of large quantities of ash. For the time being, though, the threat level remains at orange. 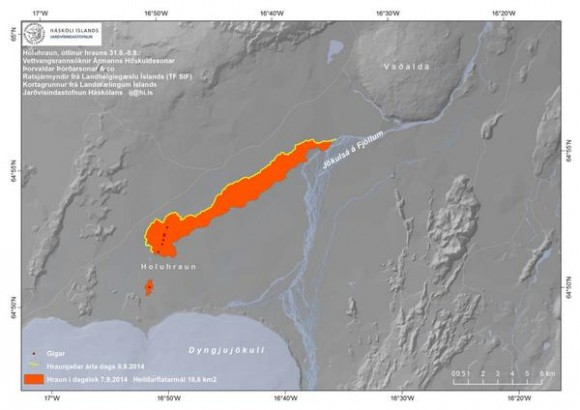 The eruption and steam have created hazy skies over the area. The Icelandic Civil Protection Authority has issued alerts to people downwind of the eruption with respiratory conditions, since there are elevated concentrations of sulfur dioxide. They continue to monitor the entire region carefully.

Thank you! Your submission has been received!
Oops! Something went wrong while submitting the form.
END_OF_DOCUMENT_TOKEN_TO_BE_REPLACED

Hurricane storm surge: what is it?