Earth Science Week starts October 14, 2012. This post has links to activities, plus the 9 big idea in Earth science. Enjoy and appreciate Earth! 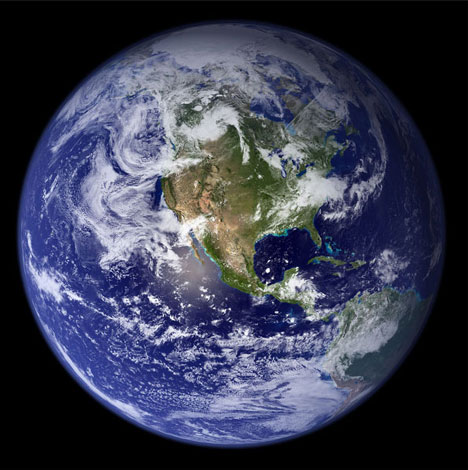 NASA called this image the best picture of Earth ever, when it released it in 2010. Click here to expand image

Earth Science Week 2012 starts today. It’s a national and international event – organized by the American Geosciences Institute – designed to encourage people everywhere to explore the natural world and learn more about Earth science. This year’s event runs from October 14-20th, 2012. You can participate in Earth Science Week in many ways. For example, we invite you to share your Earth and nature photographs on EarthSky’s Facebook page. Or try attending an event at your local science museum or nature center. Or learn more about Earth Science Week 2012, and check out these activities. If you want to talk over some ideas with your kids, or if you just dig Earth science, consider these core concepts – 9 big ideas in Earth science – put together by the Earth Science Literacy Initiative.

Big Idea 1: Earth scientists use repeatable observations and testable ideas to understand and explain our planet.

Big Idea 7: Humans depend on Earth for resources.

This video is also excellent. It’s called Why Earth Science?

You can learn more about these big ideas in Earth science by viewing the the whole series of award-winning videos produced by AGI.

Why Earth science? Earth science helps us to understand how our planet works. Earth scientists study natural processes in the geosphere, hydrosphere, atmosphere and biosphere. Their research is critical to improving our daily lives. Research by Earth scientists contributes directly to our ability to harness energy, ensure safe water, farm the land, prepare for natural disasters and build sustainable communities in both rural and urban areas.

By the way, the American Geosciences Institute (AGI) is a nonprofit federation. Its stated mission: to increase awareness for the vital role that Earth science plays in our society’s use of natural resources, resilience to natural hazards and health of the environment. The organization was founded in 1948 and represents more than 250,000 scientists. The theme of this year’s Earth Science Week is Discovering Careers in the Earth Sciences.

Bottom line: Earth Science Week will take place from October 14-20th, 2012. The event is organized by the American Geosciences Institute and is designed to encourage people everywhere to explore the natural world and learn more about Earth science. Celebrate by learning 9 big ideas in Earth science.

Update: This article was updated on October 20, 2012 to reflect the contribution made by the Earth Science Literacy Initiative in developing the Nine Big Ideas in Earth Science.

What is a human world?

New animation welcomes you to the Anthropocene

Most amazing high def image of Earth so far