An expert explains what’s happening to glaciers in Antarctica

What is happening to ice in Antarctica, and why does the reality of ice loss or gain on Earth’s southernmost continent seem so elusive?

The story about the unstoppable loss to the sea of six glaciers in the Amundsen sea sector of West Antarctica came out over a week ago. This week, scientists using new information from the European Space Agency CryoSat satellite announced that, overall, Antarctica’s land mass is losing 159 billion tons of ice to the sea every year. In the meantime, in recent years, many have heard that Antarctic’s sea ice has been spreading. What is happening to ice in Antarctica, and why does the reality of ice loss or gain on Earth’s southernmost continent seem so elusive? For one thing, Antarctica is huge (5.405 million square miles or 14 million square kilometers). It is the coldest place on Earth, with zero permanent residents, and it is available for scientific study only during its peak summertime months. Even then, conditions are harsh there. That’s why a May 17 article in the Guardian by Eric Rignot, a glaciologist at NASA’s Jet Propulsion Laboratory and lead author of last week’s landmark scientific paper on the collapse of glaciers in West Antarctica, is such a good and important read. The article is called Global warming: it’s a point of no return in West Antarctica. What happens next? It can help you understand what’s happening in Antarctica.

Rigot talks about the history of our understanding of ice sheets in Antarctica, going back to early surveys in the 1960s, followed by a recognition in the 1970s that West Antarctic ice sheets rest on a bed grounded below sea level. That’s when the concept of West Antarctica’s instability began to come to light, and scientists have been trying to understand ever since just what it might mean, on what timescale, to global sea level rise. 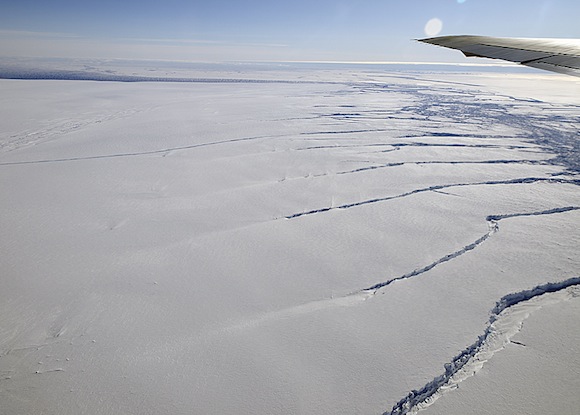 Satellite studies have aided Antarctic research, of course, but, still, as Rigot explains in his article, it wasn’t until the 1990s that scientists began to hone in on the details of ice sheet retreat in Antarctica, thanks to work by the British Antarctic Survey, NASA and Chile. The work showed that the warming ocean was affecting Antarctic glaciers and that the glaciers were thinning. From that point, Rigot says:

… we all sought to find out whether this was really happening. Now, two decades after this process started, we have witnessed glacier grounding lines retreat by kilometers every year, glaciers thinning by meters every year hundreds of kilometers inland, losing billions of tons of water annually, and speeding up several percent every year …

At the current rate, a large fraction of the basin [in the Amundsen Sea area of West Antarctica] will be gone in 200 years, but recent modeling studies indicate that the retreat rate will increase in the future.

In other words, the rate of ice loss is speeding up as Earth’s climate warms. The loss is driven largely by wind. Rigot explains:

Ocean heat is pushed by the westerly winds and the westerlies have changed around Antarctica in response to climate warming and the depletion of the ozone. The stronger winds are caused by a world warming faster than a cooling Antarctica. Stronger westerlies push more subsurface warm waters poleward to melt the glaciers…

He adds that it’s not just West Antarctica that’s seeing an ice loss to the sea.

There is also a bigger picture than West Antarctica. The Amundsen sea sector is not the only vulnerable part of the continent. East Antarctica includes marine-based sectors that hold more ice. One of them, Totten glacier, holds the equivalent of seven meters of global sea level. 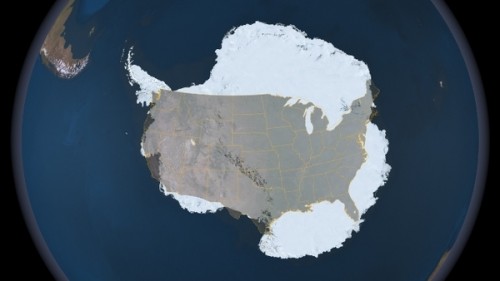 Antarctica is Earth’s southermost continent. It is huge, but has zero permanent residents. It is available for study only during its peak summer months. Even then, conditions are harsh there. Thus scientific knowledge of this part of Earth is coming only slowly. Image via NASA’s Project IceBridge.

Bottom line: Read Eric Rigot’s May 17 article in the Guardian if you want to get the complete picture here, but it’s certainly more and more clear that – despite years of skeptics saying that Antarctica is not being affected by the global warming – indeed Antarctica, like the rest of the world, is undergoing global warming’s early consequences. The ultimate consequences, which we may not experience but which our grandchildren almost certainly will, could be many meters of sea level rise.