There were no reports of injuries, but the powerful earthquake left a fair amount of cleanup to do, plus some frightened people in Alaska. 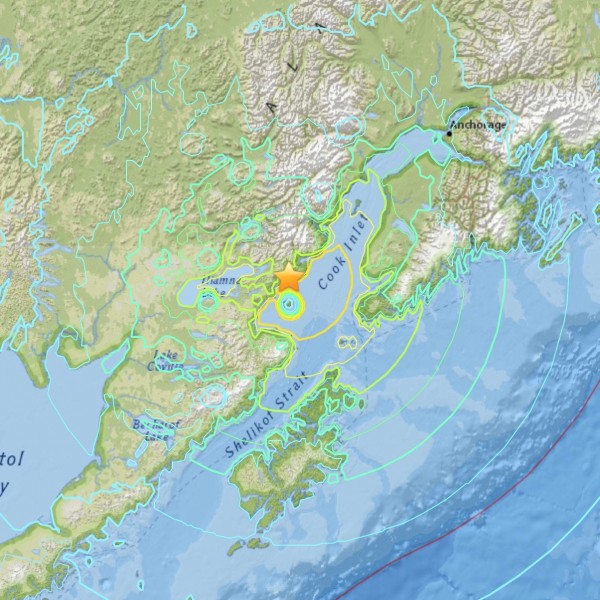 The U.S. Geological survey reported a powerful earthquake – 162 miles (261 km) southwest of Anchorage, Alaska – which struck around 1:30 a.m. local time Sunday morning, January 24, 2016. It is being variously reported as a 7.1-magnitude and a 6.8-magnitude; USGS is saying 7.1 at this time. There were no immediate reports of injuries, although the quake did reportedly knock items off shelves and walls, and rattle nerves as you can see in the video below. A magnitude-4.3 aftershock struck about two hours later.

Ben Madrid posted this video to YouTube. He began recording about 20 seconds into the earthquake, until about 5 seconds after the peak magnitude, in Kenai Alaska.

The affected region of Alaska is located on what is called the ring of fire around the Pacific Ocean, and thus it is well known for earthquakes. USGS said the quake occurred as a result of the movement of great land plates, called tectonic plates, explaining:

In the region of the earthquake, the Pacific plate moves northwestward with respect to North America at a rate of [2.4 inches or] 60 mm/yr, and begins its descent into the mantle at the Alaska-Aleutian Trench almost [250 miles or] 400 km to the southeast of this earthquake …

Southern Alaska frequently experiences earthquake activity in relation to the Pacific:North America subduction zone plate boundary. The shallow interface between these plates to the southeast of the January 24, 2016 earthquake was the location of the second largest global earthquake ever recorded, the M 9.3 Great Alaska earthquake of March 27, 1964.

Seventeen earthquakes of M 6 or larger have occurred within 250 km of the January 24, 2016 earthquake, the largest being an M 7.0 aftershock of the Great Alaska earthquake in July 1965.

The short video below shows items knocked from shelves and gives more information.

Bottom line: A 7.1-magnitude earthquake – also reported as a 6.8-magnitude – struck in southern Alaska on the morning of January 24, 2016.