The World Meteorological Organization says high temps in 2015 are due to the overall trend of global warming, combined with the strong ongoing El Niño. 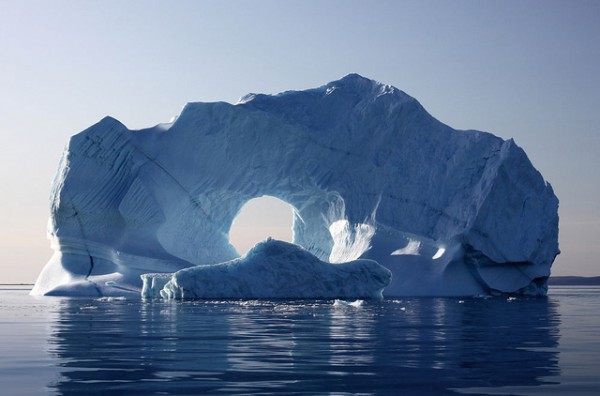 The global average surface temperature in 2015 is likely to be the warmest on record and to reach the symbolic and significant milestone of 1° Celsius above the pre-industrial era, according to a new report by the World Meteorological Organization (WMO). The WMO is a specialized agency of the United Nations, with a global membership of 185 member states and six territories. It released its new report on November 25, 2015, as world leaders converged in Paris for the 2015 Paris Climate Conference (COP21). The WMO says the high temps in 2015 are likely due to a combination of the overall trend of global warming, plus the strong ongoing El Niño.

A WMO five-year analysis by the WMO said that the years 2011-2015 have been the warmest five-year period on record. During this period there have been many extreme weather events; heatwaves topped the list, according to WMO. Michel Jarraud, WMO Secretary-General, commented in a statement:

The state of the global climate in 2015 will make history as for a number of reasons. Levels of greenhouse gases in the atmosphere reached new highs and in the Northern Hemisphere spring 2015, the three-month global average concentration of CO2 crossed the 400 parts per million barrier for the first time.

2015 is likely to be the hottest year on record, with ocean surface temperatures at the highest level since measurements began.

Added to that, we are witnessing a powerful El Niño event, which is still gaining in strength. This is influencing weather patterns in many parts of the world and fueled an exceptionally warm October. The overall warming impact of this El Niño is expected to continue into 2016

The WMO’s report comes on the heels of another United Nations report – this one from the UN Office for Disaster Risk Reduction – showing that over the last 20 years, 90% of major human disasters have been caused by 6,457 recorded floods, storms, heatwaves, droughts and other weather-related events. That earlier report – released November 23, 2015 – also said that that weather-related disasters were nearly twice as frequent over the past decade as two decades ago.

The statement from the WMO said:

A preliminary estimate based on data from January to October shows that the global average surface temperature for 2015 so far was around 0.73 °C above the 1961-1990 average of 14.0°C and approximately 1°C above the pre-industrial 1880-1899 period.

This temperature tendency indicates that 2015 will very likely be the warmest year on record. The global average sea-surface temperature, which set a record last year, is likely to equal or surpass that record in 2015. The global average temperatures over land areas only from January to October suggest that 2015 is also set to be one of the warmest years on record over land. South America is having its hottest year on record, as is Asia (similar to 2007), and Africa and Europe their second hottest.

According to preliminary figures as of the end of September 2015, 2011-15 was the world’s warmest five-year period on record, at about 0.57°C (1.01°F) above the average for the standard 1961-90 reference period. It was the warmest five-year period on record for Asia, Europe, South America and Oceania, and for North America. WMO compiled the five-year analysis because it provides a longer-term climate signal than the annual report. 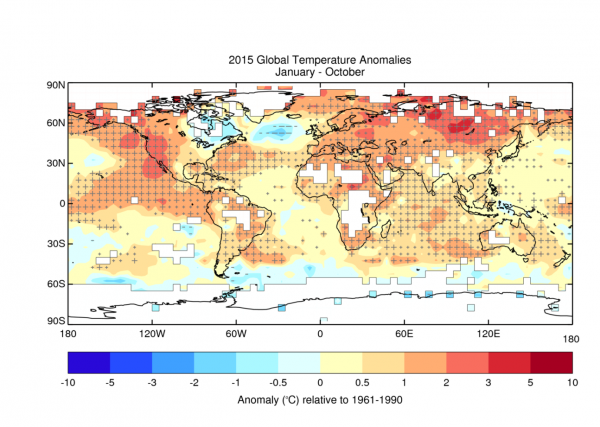 Bottom line: The 2015 global average surface temperature is likely to be the warmest on record and due to a combination of a strong El Niño and human-induced global warming, according a report by the World Meteorological Organization (WMO) released on November 25, 2015.